This has been a big two weeks of conversation about how websites get funded! Literally the day after I published my last Business of Art Fix, this whole conversation blew right open.

On Friday, October 30th, it was announced that Grantland, a site that has published truly excellent sports and pop culture writing (and also was responsible for one of journalism’s most disgusting and inhumane decisions, ever), would be folding after four years as ESPN’s literary sidekick. Grantland’s Editor-in-Chief and founder, Bill Simmons, was dropped from the site this fall, and ESPN Preisdent John Skipper said earlier this week that it was “uncertainty surrounding the site’s personnel and the resources and effort needed to keep the site thriving absent its star founder” that caused them to shutter the site. He said Grantland could’ve been saved if Sean Fennessey had taken Simmons’ position. However, according to Vanity Fair, Fennessey’s decision to decline the position was triggered by concerns about ESPN’s level of investment in the site.

Nicole Cliffe, co-founder of The Toast, responded to the Grantland shutdown on twitter, suggesting “We should spend more time praising people and websites we admire BEFORE they die or their overlords shut them down.” Then she talked about how difficult it is to fun independent media, recalling that, “sometimes I see women be I’M GONNA MAKE A SITE BC NICOLE AND MALLORY DID IT WITH THEIR VIM and it ain’t true! I could self-fund.” 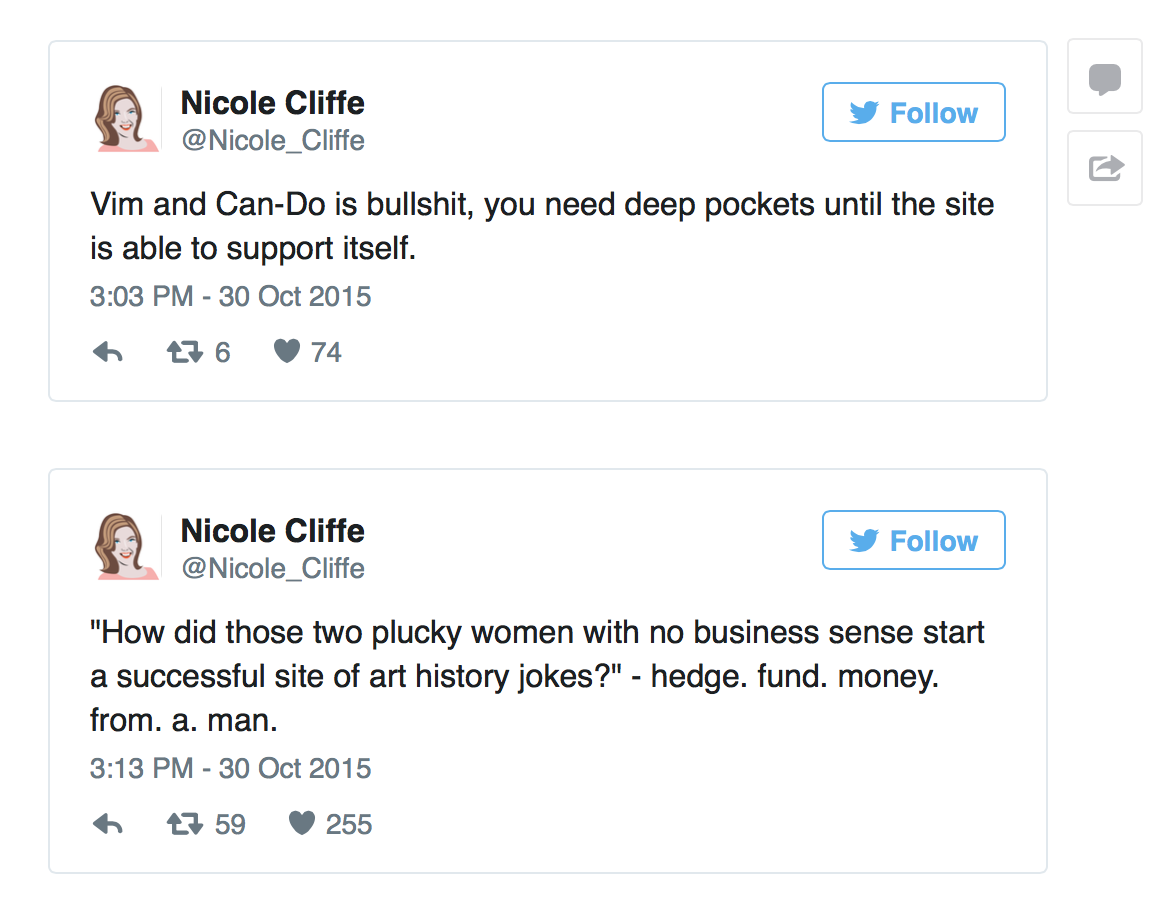 Anyhow, that was pretty rad! The Billfold followed that up with Which of Your Favorite Websites Have Money And From Where, which quoted my most recent Business of Art fix and confirmed that everybody is richer than us.

Also on the 30th, Haley Mlotek and Alexandra Molotkow, editors of The Hairpin, announced they’d be leaving the site. When asked what comes next, Choire Sicha told The Observer:

“Why would we tell anyone! That’s no fun. We were going to make it into a fantasy sports betting site but instead decided to start a heavily funded bloodwork lab—but for women. High-end commercial phlebotomy, with a feminine touch!”

Since the departure, only ten new posts have been published on The Hairpin, all of them by the site’s founding editor Edith Zimmerman, on topics including Bathroom Accessories, Nachos, Fiddle Music, Raccoons, and Mold. I asked Managing Editor Rachel Kincaid what she thinks is going on over there and Rachel noted, “Maybe they’re turning the hairpin into a meta art piece about the internet.”

Also last week, Wil Wheaton refused to write for Huffington Post because HuffPo still pays with “exposure” because they are rich and can get away with it, and The Rumpus posted about it, and then Gawker posted about how The Rumpus posted about it even though they don’t pay their writers. Which inspired me to compulsively write 2,000 words about why the conversation about paying writers needs a little nuance because obviously independent publications can’t pay writers as much as the rich ones can! Believe it or not, I found a way to work “readers should support independent media financially” into that piece. I’m exuberantly pleased to note that  as of this morning we have 1,631 paid A+ members, which is great news ’cause we’ve got some incredible new writers coming your way pretty soon!

+ Have you noticed that Refinery29 used to just be about fashion and now it’s sort of about everything? Well, I guess they officially changed their focus a while back, adding news, politics and tech coverage, and now they’ve moved on to proving that the site is not just for millennial women! It’s about “a broad, progressive, new global mindset…not an age group that spans 20 widely disparate years.” Also it’s “not a niche lifestyle site just because it’s aimed at women.” After securing $50 million in funding earlier this year, it’ll be launching a U.K. edition this month and German and French sites in 2016.

+ Exit music (for content): Justin Ellis says goodbye to Nieman Lab with some hot takes on the life cycle of the media business.

+ Add “videos of cute animals” to the list of things that are more complicated and potentially messed up than they seem.

+ The Binder Cast is a thing that now exists, and is hosted by Lux Alptraum who I know from my old days in the sex-positive blogger community in New York and also Leigh Stein, who I’ve never met or ever seen in her underwear. The first episode features two women I love a whole lot, Roxane Gay and Emily Gould.

+ Today in Things I Am Jealous Of: Bustle is shooting its own stock photography, and apparently Refinery29 has been doing it for some time.

+ Mallory Ortberg will be your new Dear Prudence. Don’t worry she’s also still gonna be at The Toast!

+ Meet Dialogue: Medium is pioneering a new way to style conversations on the internet.

+ A crop of hyperlocal news sites have sprung out of Patch, which itself was a failure.

+ Newsy wants to build a cable-like news network for millennials.

+ Melody Kramer at Poynter has spent a year talking to people outside of New York, D.C. and Los Angeles who don’t work in the news about how they consume their news and what annoys them about it.

+ Flint’s poisoned water has been a top news story in Michigan for the past few months: here’s the story of the reporter who busted that situation right open.

This Business of Money

+ Keeping Up Appearances With Gaby Dunn: The latest podcast from your imaginary girlfriend Brittani Nichols is about when everybody thinks you have money ’cause you’re semi-famous but you’re actually poor.

+ Kate Beaton talks to The Comics Journal about being a financially solvent cartoonist, and how her financial decisions have been heavily influenced by her upbringing in rural Nova Scotia.

+ Even famous female economists get no respect.

The End of Days

+ AdBlock Plus had a meeting with publishers, advertising agencies and academics.

+ Tumblr is rolling out instant messaging.

+ Facebook has sent 32% less traffic to top publishers since January.

+ Instagram is figuring out how to show you more ads.