It’s a myth that all queer women own cats, but also… a lot of us do! Or dogs, or parrots, or a ferret that we co-parent with our ex. As of reader survey data in 2015, only 12% of readers didn’t have a pet and didn’t want one. 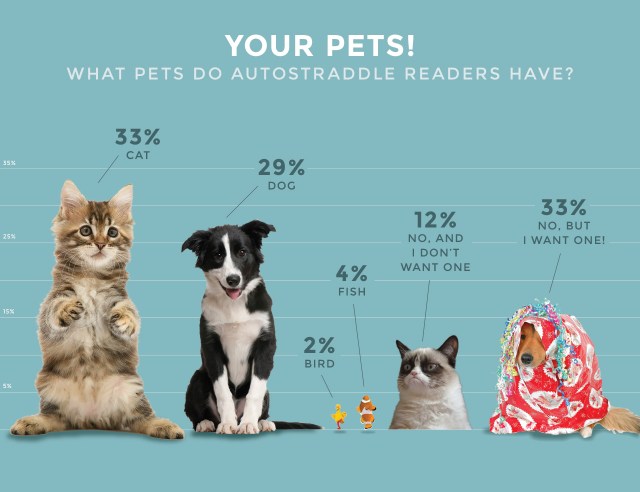 infographic created for an A+ Insider Newsletter as of 2015

The intense pet culture of many queer communities (do straight people go on first dates to the dog park? I feel like maybe they don’t?) means that often as not, a relationship with another queer human also means a relationship of some kind with their pet(s), even if you are not a pet person, per se (or not attuned to their preferred species of pet). Because historically you guys have loved it when I’ve given you advice about how to make space for an interest of your crush’s that you don’t necessarily share, we’re here today to talk about dealing with your crush’s pets, and also dealing with your own pets in the context of your crush!

One thrilling and intriguing aspect of casual sex is the way that no matter how no-strings-attached you’re keeping things, some weirdly intimate things about you will be shared with the other person as a matter of course — what you keep by your bedside table, your morning routine, the fact that your cat crouches on your chest staring at your face while you sleep like a demon. There is nothing fundamentally bad about this, but if there are pet-related aspects to this, it’s polite to address them! If you have someone over, deal with your pet and maybe close the door if possible so that no one has to have your cat appear and begin batting at a strap-on. If your pet usually sleeps in your bed, maybe inform your date about this and ask if that’s okay, or if you should lovingly remove your pet from the bedroom for the night. If you are the invitee in a pet-owning home, and you know you’re going to be bothered by Fido crying all night outside the door or a guinea pig rattling its hutch, I think it is perfectly okay to be honest about that fact and respectfully call a Lyft back to your own place for the night! (I am generally in opposition to feeling any obligation to sleep over, but that is a story for another day.) “I had such a great time; it’s going to be really hard for me to sleep here; I’ll text you when I get home safely!” That’s all, you’re done.

Relatedly, if you’re going to be having hookup guests at your place and you have pets, consider keeping some over the counter allergy meds around! It’s a nice gesture!

Several years ago, professional animal trainer Mary Tully wrote this guide to getting your crush’s pet to be obsessed with you. Given that Mary and Alex have since gotten married and gotten pregnant, I feel like her advice is worth paying attention to! As she explains, for someone Very Into Their Pet (which most pet owners are!), this is a major consideration:

When I’m first dating someone, there are of course many little things that can make a big impact on my feelings about that person, like: how do they interact with their friends/family/coworkers? Do they read books? Can they cook food? Etc. But the interaction that I scrutinize the most — the one that if it doesn’t go well would stop the budding relationship dead in its tracks — is how the person I’m dating interacts with my 95 lb bear-dog, Kai.

You can’t do anything to 100% guarantee that someone’s pet will love you; pets are mercurial, much like people. You can give someone’s pet their own space and let them investigate you and get to know you in their own time, giving them as much treats and attention as they seem up for. Maybe more importantly, you can make sure your crush’s pet, and thereby your crush, doesn’t actively dislike you! Don’t get overly familiar with a pet you’ve just met or try to force affection by chasing it around or insisting on picking it up. Be respectful of your crush’s pet feelings, even if you don’t share them — opining at length about how you just don’t “get” dogs when she’s obsessed with them isn’t going to help you. Even or especially if you’re another gung-ho pet person, be chill about it — maybe actually worse than someone who doesn’t care about your pet is someone who is Much Too Much about your pet. I still haven’t forgiven the person who told me I should change my cat’s brand of food within the first 30 minutes they were ever in my apartment. If you can be approachable, open but chill, you’ll be beloved by both your crush and her pet in no time.

When two pet-owning homes become one

Only slightly less time-honored a tradition than adopting a pet together much too soon after moving in together is trying to get both of your pre-existing pets to get along after you move in together much too soon! To a certain extent, this is out of your control; you and your new girlfriend’s pets will feel however they feel about each other at the end of the day. There are, however, steps you can take to make the process as smooth as possible! If you can socialize them together before moving in as much as possible, like taking dogs to the dog park together; that’s great. If not, like socializing a dog and a cat, you can at least introduce them to the idea of the other animal by bringing over blankets or toys that smell like them to get acquainted with ahead of time. Once they’re living in the same space, they should be separated at first in different rooms or with a childgate while they get acquainted to new routines and the idea of another animal; cats should have private areas or high-up spots to retreat to so they can feel safe.

I am irredeemably allergic to a popular pet

Is it possible to functionally date as a queer woman if you’re allergic to cats? It will be annoying, but basically, yes! If you have had the misfortune to fall for someone with a pet that you’re allergic to, obviously you’re aware that there will be some irritation associated with it, but if we can accommodate eight different kinds of dietary restrictions at every social gathering as a people, you can make this work. If your person has a pet that can be left independently, like a cat, you can volunteer to have your place be the one you spend the most time at; if not, you can do your best to create a relatively pet-free space at theirs, and vacuum/change sheets and pillowcases as often as possible.

Much like love in general, there is no guarantee of success, but with some effort and dog treats, I truly believe that Mary, Alex and Kai’s reality of having beautiful couples photos taken by Robin Roemer is possible for you!

sign up for our newsletter
Related:catsdogslesbian datinglesbian sex 101sex and dating