Black History Month started in 1926 as “Negro History Week,” centered around the birthdays of Abraham Lincoln and Frederick Douglass, and then expanded into Black History Month 50 years later during the nation’s bicentennial. Black History Month speaks to our need to preserve the lived realities, achievements and culture of black people in the United States who have seen our humanity obliterated by white supremacy for generations. This month, we seek to restore self-value and pride to oppressed communities while also hoping to correct some distorted histories.

When President Gerald Ford officially recognized the month of February as Black History Month in 1976, he encouraged Americans to “seize the opportunity to honor the too-often neglected accomplishments of black Americans in every area of endeavor throughout our history.” But all areas within that culture have not been covered equally by the dominant culture. And because historically marginalized communities often imitate the same hierarchies in dominant cultures, so despite Black leaders championed the cause of uplifting Black communities through retellings of our experiences, the holiday legitimized the experiences and realities of the most socially acceptable members of African American communities — like those of Black cis-hetero men — while silencing other narratives. And of course said dominant culture does the same, and always has.

Often excluded from Black History? Black lesbians, womanists and lesbian-feminists. Obviously I’d say these lesbians were important to Black History simply because I think lesbians are always important, but my personal bias aside, these women provided serious contributions to political liberation movements and ideology. Understanding and respecting black history means examining these Black lesbians’ political and community work. So without further ado, let’s meet some bomb-ass Black lesbians and their organizations.

In 1974, a group of Black lesbian-feminists in Boston, Massachusetts gathered together to form a seriously queer union of women dedicated to challenging systems of oppression in a multifaceted way. They named themselves the Combahee River Collective after Harriet Tubman’s military campaign where she freed over 750 enslaved people. (Notably, this 1863 Combahee River Raid was the only military campaign designed and executed by a woman in US history.)

The Combahee River Collective set out to dismantle sexism, racism, heterosexism (or the privileging of heterosexual relations, behaviors, and dynamics), and classism, employing what we can call today “intersectionality”. The historical context of this group’s formation is key to understand the members’ decision to organize themselves into a collective with certain goals in mind. The 60s and 70s saw a lot of movement and organizing within historically marginalized communities, but these communities did not always take into consideration the perspectives of members more socially disadvantaged than others. The women who ultimately participated in the Combahee River Collective were fed up with the racism in white feminist movements, the sexism in anti-racism and Black nationalist movements, and the disregard for issues related to sexual orientation and class in Black feminist movements, such as the National Black Feminist Organization (NBFO). It was at a New York regional meeting of the NBFO that author Barbara Smith and other delegates began doing the work to build Combahee, although initially their intent was just to form a Boston chapter of NBFO. But the more work they did, the more they realized the need to strike out on their own. In these women’s efforts to explore the different injustices they faced, the Combahee River Collective created an alternative space to explore what happens when you really hit the oppression jackpot. These Black lesbian-feminists got right down to business in their “consciousness raising” meetings and by April of 1977, they had published a group Statement. In their Statement, they refused to ignore the implication of their Blackness solely to gain access into white feminist movements. Here’s the first paragraph:

We are a collective of Black feminists who have been meeting together since 1974. [1] During that time we have been involved in the process of defining and clarifying our politics, while at the same time doing political work within our own group and in coalition with other progressive organizations and movements. The most general statement of our politics at the present time would be that we are actively committed to struggling against racial, sexual, heterosexual, and class oppression, and see as our particular task the development of integrated analysis and practice based upon the fact that the major systems of oppression are interlocking. The synthesis of these oppressions creates the conditions of our lives. As Black women we see Black feminism as the logical political movement to combat the manifold and simultaneous oppressions that all women of color face.

They also acknowledged they can and must fight alongside Black men against racism, but also challenge Black men’s misogyny and sexism without assuming some kind of guilt for “betraying” their men. Most radically, they rejected political economic systems that preserve capitalism and imperialism at the particular expense of people of color. They held retreats in the Northeast, inviting black feminists to bring “copies of any written materials relevant to Black feminism—articles, pamphlets, papers, their own creative work – to share with the group… [to] foster political stimulation and spiritual rejuvenation.” After subsequent retreats, women were encouraged to publish in journals like Heresies, Frontiers and Conditions. Famously, in 1979 a Combahee member named Chirlane McCray published an article called I Am a Lesbian in Essence Magazine — McCray is currently married to New York City mayor Bill DeBlasio (we talked a little bit more about that here).

Although the organization disbanded by 1980, in its work, The Combahee River Collective changed the game in a really important way. The Collective believed that focusing political work on Black women, especially queer Black women, was a key to social liberation because the liberation of a group so disadvantaged on multiple levels would necessitate the liberation of all peoples. This idea that multiple identities create nuances in people’s life experiences that can compound or complicate the oppression those people face helped to give birth to the way we approach identity politics today. The Collective complicated the framework for political activism in the 1960s, and a lot of modern, social justice initiatives adopt and continue to adopt the Combahee River Collective’s approach, even 40 years after the group’s formation. 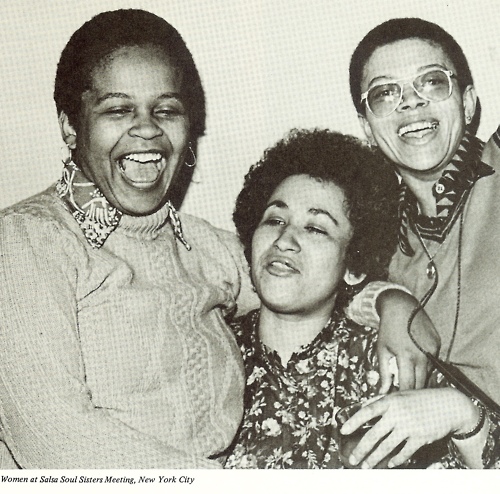 The AALUSC began as an offshoot of an offshoot of an offshoot… of a couple more offshoots. To find the roots of this group, we must go back all the way to the Stonewall Riots in 1969. After the police raid at Stonewall Inn that sparked a number of protests in response to the persecution of LGBT folks, many advocacy groups assembled to address the needs with various LGBT communities. Only weeks after the Stonewall Riots, queer activists organized the Gay Liberation Front (GLF), a group that advocated for destroying social institutions in order to liberate queer people. Before GLF’s quick demise in 1972, members of the group split off and formed the Gay Activists Alliance (GAA), an organization that wanted to focus on the single issue of securing basic human rights, freedoms, and dignities for homosexual people. From GAA came the Black Lesbian Caucus in 1974, who again splintered and changed their name to the Salsa Soul Sisters, Third World Wimmin Inc Collective. Salsa Soul Sisters is the oldest Black lesbian organization in the US.

Until 1990, Salsa Soul Sisters invited both Black women and Latina women, but it transitioned into an exclusively Black lesbian organization. Today, the group uses the name, “African Ancestral Lesbians United for Social Change.”

The AALUSC provided an alternative for Black women (and Latinas, pre-1990) to the lesbian bar-scene that had discriminated against lesbians of color in the past. It also focused on empowering Black women through their similar experiences while also encouraging Black women to embrace their differences. Continuing its legacy of offshoots, the AALUSC has given life to new groups such as the African Ancestral Society of Butch Women, Young Lesbian, Bisexual, Transgender Two-Spirit Women of Color, and Lesbian Parents. Where the Combahee River Collective influenced political rhetoric, the AALUSC touched upon the psychic and spiritual experiences of lesbians of color and tended to those community needs. The AALUSC definitely understands that spiritual uplift can facilitate a community’s ability to tackle oppression and enact social change.

Many of these politically conscious Black lesbians understood that histories are most validated when documented. Literature and the written word are often the basis by which we define how legitimate a history is. As a result, it comes as no surprise that many of these Black lesbians assembled publishing companies and presses as a way to produce and distribute stories and memoirs that mainstream companies would not view as marketable or worthy of attention. For example, the aforementioned Salsa Soul Sisters published a quarterly periodical for Black and Latina lesbians called, “Azalea: A Magazine by Third World Lesbians.” The publication prided itself on its resistance to dominant cultures’ tendency and need to assess the worth of something through an arbitrary measurement of worth. Likewise, Salsa Soul Sisters also published “Salsa Soul Sisters/Third World Women’s Gay-zette” in the 1980s and formed another offshoot called the “Jemima Writers Collective” so that Black women could share their work with one another and negotiate damaging self-images.

Moreover, encouraged by the fabulous queer matriarch, Audre Lorde, Barbara Smith started “Kitchen Table: Women of Color Press,” which reached across nationalities, ages, sexual orientations, socioeconomic classes and racial/ethnic heritages to engage the writings of other women of color — especially queer women of color — in conversation with one another. The press managed to publish works such as This Bridge Called My Back: Writings by Radical Women of Color, Home Girls: A Black Feminist Anthology. and Audre Lorde’s I Am Your Sister: Black Women Organizing Across Sexualities, which have now become important literary staples in higher education coursework. Not to mention that Kitchen Table Press became an advocacy group on top of its literary relevance!

Think back to your elementary school education during Black History Month. Did your read about Martin Luther King Jr. through the most sanitized narratives of his work? Was good ole’ Abe Lincoln a hero? Did the story ever change as the years progressed? Black History is not perfect; it often erases people and communities that are not as easily contained, explained away, or changed in an attempt to be more valid in the lens of white society. Just because Black lesbians often aren’t mentioned during Black History Month all the time does not mean that they did not influence and even transform Black and non-Black liberation practices. As this Black History Month winds down, let’s remember that reclaiming histories is not a one-shot deal. We must always work against the silencing that mainstream and dominant cultures attempt to enforce on marginalized realities. Let’s take time to be thankful for these lesbians who kept it queer and kept it real.