Hey there! Are you ready for something to actually happen w/r/t a DADT repeal? So are we, but for now we’ll have to settle for very minor news about the survey being offered to enlisted soldiers about their feelings. (Not that we don’t love feelings. We do. Obviously.) Basically, the format the DADT survey is taking is an “online inbox,” which sounds like something that your grandmother would make up because it sounds like “an internet thing,” which soldiers can access via the Army Knowledge Online site. The DOD seems, as per ushe, reluctant to share much about the details; we know that it’s supposed to be confidential, and that the messages soldiers leave will be shared with the Department of Defense Comprehensive Review Working Group. We’re also told that the inbox will remain open until about September 30 or “until leadership decides the inbox has fulfilled its purpose,” which, um, is it me or did it just get really ominous in here?

Because they are tricky motherf*ckers and also awesome, Pam’s House Blend has obtained screenshots of the survey in question, so we can feel a little less in the dark about this whole thing. Firstly, that confidentiality thing? Don’t get too excited about that. “The Army cannot guarantee confidentiality of the information you provide, but our intent is for you to provide anonymous comments.” Really? That’s the best you can do? 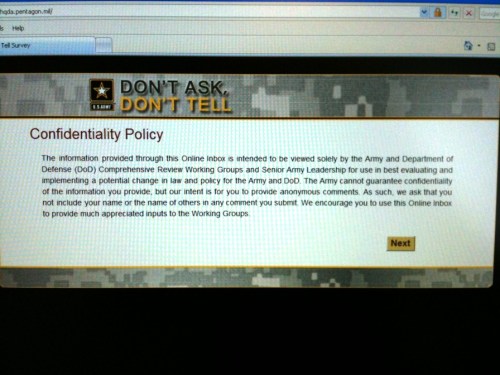 In case that was too vague, they later go on to specify that there’s virtually no confidentiality at all, and you can in fact still face repercussions for anything you say, which is in fact pretty much the opposite of confidentiality. The footer at the bottom of this login screen reads: “This is a non-confidential Online Inbox, Please do not use your name or the names of others within your comment. The “Don’t Ask, Don’t Tell” law is still in effect. Please be aware that comments or involvement in criminal activity or statements that an individual poses a threat to him/herself or others may be referred to the appropriate Army or DoD authorities.” Oh, and of course it would be WAY TOO MUCH TO ASK for gender identity options besides male and female. Thanks for that, Army! 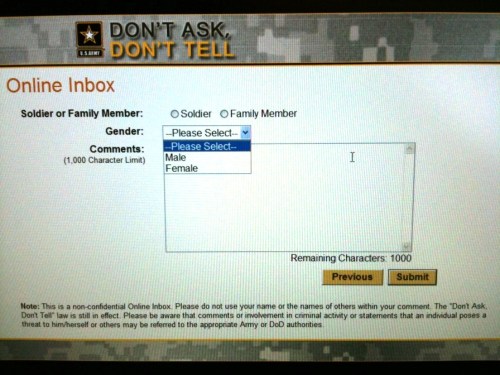 Let’s be real, if you’ve been doing any kind of reading on this survey you weren’t feeling great about it in the first place, but hopefully you now feel equipped with the information necessary to focus your helpless anger and bitterness on specific points. Also, for our queer enlisted readers, we’re genuinely sorry that this is the best option you’ve been given.