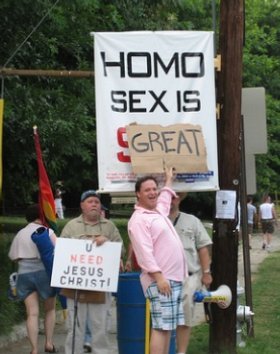 Depending on who you follow on Twitter, you may or may not have been aware of an article that was excitedly passed around the Gay Internet with ironic glee last week. It was Christwire.org’s article promising to help devout Christian women determine if their husbands might be secretly gay, and included such gems as “It’s quite common for young men to enjoy the science fiction end of popular culture, but when your husband becomes overly obsessed with romantic and feminine shows, that is cause for alarm. Gossip websites, Glee and The Golden Girls are three well-documented icons of the gay movement that genuine heterosexual men avoid.” Today we find out via Carnal Nation and the NYT that Christwire.org follows in the footsteps of sites like Landover Baptists, and is in fact entirely a joke, which means that they did not in seriousness advise anyone that “Gay men use the gym as a place to socialize and to have secret liaisons in the bathrooms. They like to work out their bodies without the competition of sports play. Afterward, they use the showers and steam rooms to engage in sexual activity beyond the prying eyes of women.” Depending on your sense of humor, this is either saddening or relieving news.

Either way, though, it brings to light an interesting/terrifying fact about the “culture war” in the US – our rhetoric (or at least ONE side’s rhetoric, *coughcough*) has gotten so insanely paranoid and misinformed that it is actually impossible to differentiate from parodies of itself; the serious debate on the matter of homosexuality has reached such a frothing-at-the-mouth fever pitch of anxiety and fear that one is not actually able to heighten the effect at all for the sake of hyperbole. Carnal Nation references this as Poe’s Law, which was first stated in this format in 2005 – “Without a winking smiley or other blatant display of humor, it is utterly impossible to parody a Creationist in such a way that someone won’t mistake for the genuine article.”

Rumor has it that Lady Gaga dressed up as Lady Gaga for Halloween last year, knowing that she’d never have to worry about being recognized in the crowds of people costumed as her. This is the world we live in now! Where fact is so crazy it can pass for fiction, and vice versa! Real lesbians have stopped being polite and started getting real! Cats and dogs living together! Oh, where will it end?

This week we shared with you how not to advise anxious gay people via advice columns. Now we’d like to provide you with a positive counterexample – it is possible to write an advice column that treats gays like normal people! Miss Lonelyhearts of the Winnipeg Free Press helps out a woman who’s concerned that accepting social invitations from her lesbian co-worker will end in propositions/embarrassment/crazy lesbian stalker murder death. Miss Lonelyhearts sets her straight: “Let’s go straight to the underlying worry. It’s a fallacy that gay people are on the make and want to convert straight people… She probably thinks you’re an interesting friend, and that’s all. She hasn’t given you cause to think anything else.” ATTA GIRL. (@winnipegfreepress)

This article claims that Beth Ditto is planning on beginning a family with her girlfriend, and will take steps towards pregnancy with the help of her doctor after the launch of her new clothing line. It’s terribly sourced and quote possibly not true at all, but it also contains a gallery of 58 Beth Ditto-related images, so we figured that on the whole it could be a link worth clicking on. (@allvoices)

At this point we no longer have any idea what Nicki Minaj identifies as or what her real accent sounds like, it feels as though there is nothing to count on in this cold cruel world, so we’re just going to report on this one day by day and see how it plays out. Today, Nicki Minaj has credited herself with providing a gay-positive perspective in hip-hop, largely because of her gay fans and the diverse population she grew up with. “I didn’t set out to do that,” she says. “I just like to put a spotlight on the people who support me, and it just so happens, you know, that the gay community has supported me — more than I ever could have imagined.” (@ontd)

The highest court in Britain has ruled that if a person in danger of harm or persecution because of their sexual orientation applies for immigration to the UK, they will be allowed to live in Britain, and refugees seeking asylum status because they are unsafe in their home countries cannot be deported. The article itself has a bad attitude about this, noting grudgingly that “this rule [applies] to lesbians also,” but we are very excited. (@sundayleader)