LOOK AT STAR-CROSSED FUTURE HUSBAND AND WIFE ATOP PONIES IN THE MAJESTIC DESERT!!!!!

You guys ever seen Brokeback Mountain?

Over the river and through the woods we go and subsequently arrive at Dana’s Memorial Tavern for yet another round of Shane’s Poker Night. Our introduction to the evening is Tess’s leg emerging lavishly out the door of a fancy car as she passes two thwarted bar-goers and waltzes in to her tables! The bangs are swooped, the bar is stocked, the money is being distributed in envelopes.

Tess heads into the back and Shane spots a white male extra getting up and heading in that direction shortly thereafter. Suss.

It’s time for Dani’s Night Out with Gigig, and Gigi’s laughing about Dani punching Finley in the face! They discuss Dani’s Dad (she’s worried he may be sick) and Gigi’s family (seven brothers) and how it was lonely for Dani growing up after her mother died and they’re laughing and drinking and it’s so warm and easy.

Are you thinking about having sex with me right now?

It crossed my mind…

As men are so often known to do — and continue to do, to this very day, even in this City of Angels — one comes over to hit on them, and Gigi explains that they are lesbians on a date, which predictably does little to deter him but eventually he returns to his man-box.

“I know this isn’t a date, but that was the fastest way to get rid of him,” Gigi explains. Dani says she so happy for Gigi and Bette but Gigi says she’s not sure it’s gonna work out and who cares about all that, she would like to learn more about Dani. I would like these two to begin a romantic and sexual relationship and I see no reason why all of us cannot have our needs met today.

We return to Poker Night to confirm nothing of interest to me personally is taking place. Shane asks Tess if she’s okay and Tess says she’s fine. OKAY HAVE SEX

I just saw Micah and Maribel kissing in the trailer so I’m pretty sure Micabel is really gonna happen!

What are you having for dinner? Good question. The answer for Alice is: martinis! She’s dining with her editor Tom but more pressingly, she’s spying on Nat’s date with Marissa. “This place is Hollywood, yo,” says Tom. Tom, with familiar gusto, extracts a laptop from his bag and begins asking Alice the important questions. For example — is she “a bisexual person”?

I mean do we really need an entire chapter about a one-night stand with a lesbian vampire?

Alice is a bit distracted trying to find an optimal angle from which to absolutely torture herself, but confirms this orientation and asks if he is bisexual. “No, I did play soccer when I was younger, and there were a lot of thoughtful men,” he says. “But actually I am 100% heterosexual.”  Tom remains adorably clueless, rambling about his ex marrying his friend and how he wouldn’t be able to separate sex from emotion and Alice is simply engaged in a warp-vision situation with Nat and Marissa. Alice is truly playing with fire here!!!

So basically you can pick whether you want unlimited soup or unlimited salad. But since we’re both doing it, I think you should say soup, and I’ll say salad, and then we can share. For soups, the Minestrone is the healthiest, but the Zuppa Toscana is hospitaliano in a bowl!

Marissa touches Nat’s hair and Alice begins a little panic attack and decides to exit the premises through the kitchen — Tom chases after her out into an empty alley where she can have a mental breakdown.

It’s not jealousy, she insists. In FACT, it is simply being stabbed in the heart and having all of her organs removed and extracted violently from her body. Tom suggests they put it in the book, which I love. Alice says she didn’t think seeing them would hurt this bad. She realizes, standing on the pavement outside a restaurant with her editor from the movie Clueless, that it’s over.

This just isn’t something she can do. And I wish we could get more here — wish we could explore, for example, how she’s likely got a lot of baggage from Dana, who left her for Lara after Alice had tried so very hard to be cool about them even being friends. But I’m also eager for Alice’s next step and kinda shipping her with Tom, so?

Back at Poker Palace, Shane bla bla Jack straight came in high yadda yadda counting her money. Tess says the man who followed her in the back groped her. Shane climbs atop her rescue animal and insists she finds the guy and I don’t know…. punch him? 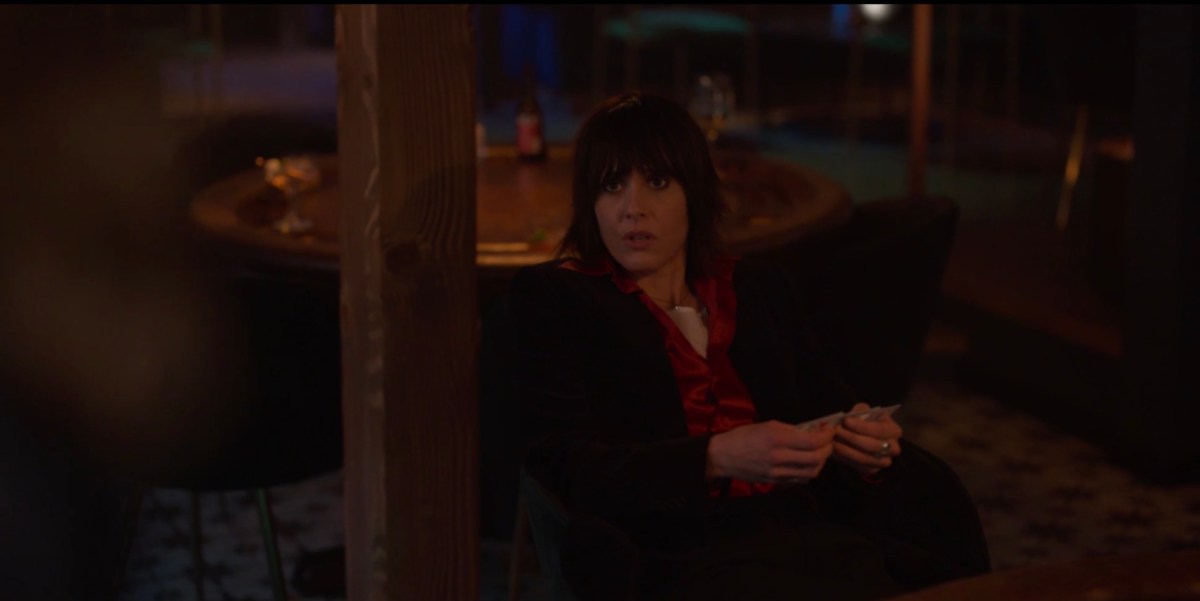 Tess implores Shane to calm down and listen to her. She took care of it by taking a “rake” — a portion of the winning pot. It’s illegal but, she says, it is customary if a guy is winning too much or is a prick.

Nat arrives home smelling of pussy juice and toasted ravioli to find Alice still in her very cute work blazer instead of sleeping, as she anticipated.

I told you, your nose is completely symmetrical. He did a great job!

And that’s a wrap on Alice and Nat. It’s time for a closing musical montage!

Sophie arrives home and drops her keys… right into a bowl!!!! It’s a slam dunk with an assist from our very own Sarah Finley!!! The crowd goes wild!!

Angie is looking at pics of herself and then pulls a pic of Marcus Allenwood and a baby out of her back pocket.

Tess and Shane are counting their money like big ballers. Also Sounder III is there. Like in that painting of a poker game.

Sophie walks over to where Finley is standing in the kitchen and wraps her arms around Finley’s waist. AWWWWW!!!!!

Bette is googling Pippa Pascal. She calls Gigi, who silences the call — she’s still in the car with Dani, talking about her family. She reveals that her full name is Golnar Ghorbani but “Gigi’s just a nickname my Mom invented for stupid Americans in grade school.”

“I had the best time tonight,” Dani says. “And it really came out of nowhere.”

“The pleasure was all mine,” says Gigi.

OOOOPP surprise there are a lot of police cars outside Daddy’s Manor?!?!?! EEEYIKES

The Round-Up:
Gay Squabbles: 4 this episode, 15 total
Lesbian Sex Moments: 0 this episode, 2 total
Quote of the Week: Sophie’s face when Finley tells her that Dani took the red pepper