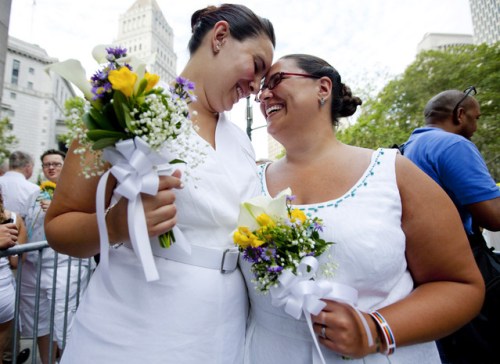 This past weekend was the first opportunity for gay couples in New York to wed; the rush of people who took advantage of it in NYC was overwhelming, with the city issuing 659 marriage licenses and performing 484 marriages in one day. (The NYT has moving portraits of 20 of them on their website.) In honor of the occasion, The New York Timeshas also put together a Special Issue on marriage equality that highlights some of the unique and interesting angles of marriage for modern queers, and whether marriage equality with straight people translates into marriage being the same as for straight people. 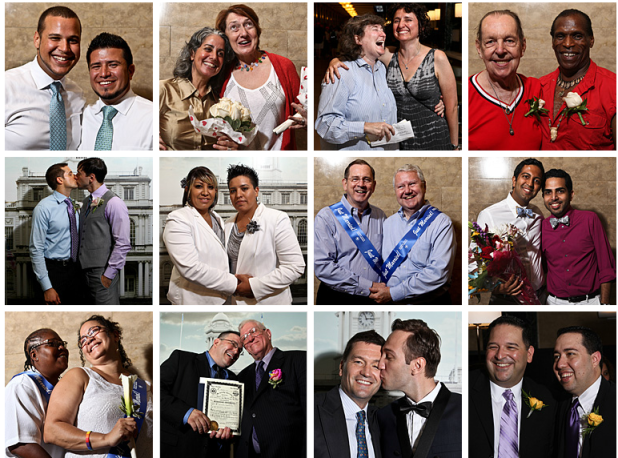 portraits via the new york times

For instance, there’s the revelation that when marriage becomes an achievable life milestone for same-sex couples in the same way that it is for heterosexual ones, it also becomes possible for the parents of queer people to push for it, just as straight couples have had to suffer through for centuries:

“I’m a Bible-thumping Lutheran who just got my church to put rainbow stickers on their door,” said Ms. Robinson, who is divorced and uses her maiden name. “If they were married, I would feel more like I could write Lindsay’s name in the family Bible in ink.”

While at the same time, for some couples legal marriage is less of a social or familial checkpoint and more of a move for protection from the everyday injusticesthat gay people and their families face:

Around 4 a.m., an attendee poked his head [into the hospital room], saw me and asked, “Who are you?”

“Melinda’s domestic partner,” I lied. Although we lived together, we hadn’t filed the paperwork. He squinted through the dark dawn, looked at his watch, and said, “Visiting hours will begin soon enough.” I held my breath, not knowing if that meant I had to leave and come back or could stay and he would overlook the time.

Despite some states’ bans on same-sex adoption, it’s still easier in many places to raise children together than it is to be legally wed, there’s also the case of new or longtime parents who may not care much about the institution of marriage for themselves, but who are now marrying to provide legal stability and cultural normalcy for their children.

While some things are the same, what comes out most clearly in these stories is difference – the ways in which we are now equal but still separate. How for many couples, who have already been together for longer than many legal marriages last, a wedding this weekend isn’t so much a major milestone in their relationship, but a marker of the fact that they can finally have some level of public recognition for it. How more than a few couples are marrying for the second or third time, despite already having had a ceremony and all the legal protections that the law currently allows – just to bask in the fact that they can.

One couple, Pat Dwyer and Stephen Mosher, are even going on a ‘marriage tour,’ marrying in every state where it’s legal. (One has to wonder when they’ll be able to make it to 50, if that moment will come in their lifetimes.) Within the mainstream cultural understanding of what marriage is, this makes no sense. A wedding is The Happiest Day of Your Life – but it’s just a day, and repeating it changes everything it’s about. (Unless you’re one of the 46% of marriages that back in 2008 ended in remarriage for at least one person, in which case it’s only the first instance of The Happiest Day of Your Life.) (Or a couple who chooses to renew their vows, although one could argue that’s a different situation.)

When taken together, the NYT’s Special Issue makes a compelling argument that gay people are redefining marriage – just not in the way that NOM and the religious right fear we will. Those who are now entering into legal marriages are doing so because, having been denied it for the entirety of their lives up until now, have had time to realize exactly how much they want this. Statistics show that in states where gay marriage becomes legal, divorce rates stay the same or drop — which may be partially explained by the fact that in many states, the process for gay divorce remains thorny even after marriage is legalized, but the fact that in the UK less than 1% of civil partnerships had ended in divorce years after they were legalized seems to support the idea that same-sex couples enter into marriage less frivolously than their straight counterparts.

The significant contingent of gay couples who oppose or aren’t interested in marriage as an institution strengthen this fact – despite the NYT’s profiles of their pushy parents, the fact that many young gay couples aren’t marrying when their straight counterparts would feel socially pressured to makes the marriages of those who do want them more meaningful.

Marriage has been a mainstay of American culture the way the Superbowl Halftime show or political sex scandals are — it’s a hoop that’s so normal to jump through that the decision not to have a wedding is almost more newsworthy than an announcement of one. While there are those for whom the ceremony does have major religious significance, for many Americans its importance is only social – pleasing parents, seeing far-flung family, shopping for a dress and tux and receiving three different coffee machines at the wedding. For the 484 couples married on Sunday, the ceremony meant something so different it almost does seem like conservative critics are right, and using the same word just isn’t appropriate.

For some, it was something more powerful than they can describe, a deeply emotional experience that finally validates their love, something that can’t be compared to Britney Spears’ infamous and oft-referenced short-lived Vegas “marriage.” For some, it was a perfunctory process that they felt they had to go through to keep their family secure. Either way, despite the fact that most of the marriage equality movement has been predicated on convincing straight people that we only want what they have, what actually happened in New York City this weekend isn’t something that the average straight person is likely to understand. 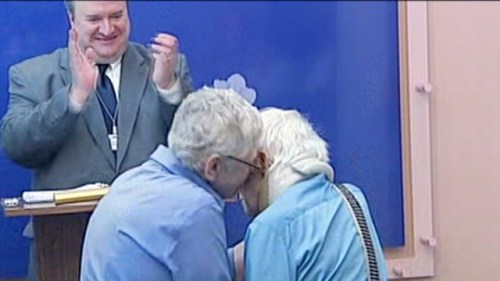 As is only reasonable given the fact that we’ve been denied access to it for all but the last decade of our nation’s history, “the institution of marriage” has come to mean something unique and unprecedented to the gay community, and to individual same-sex couples. Marriage is a political golden ring, a prize to be won, but also a gateway for some into being a “normal family,” and a way for others to change what being a “normal family” means. It’s something that we can radicalize by taking part in, even over and over again – for instance, with a “marriage tour” that has overtones of a (joyous) protest (and recalls NOM’s Summer of Marriage Tour). It’s something that we can radicalize by refusing to take part in, able to say “no” for the first time to a choice that for our whole lives we weren’t allowed to make.

New York isn’t the first place this choice has become a reality, but it’s the biggest and most diverse, and some speculate that it could be the tipping point for the rest of the nation. There’s no way to know whether that’s true. But we do know that even though the whole world is looking on this week, the community and individual celebrations (or rejections) of this moment are ours, and only ours, because we’ve made them that way.