The Fish Child (El Niño Pez) is not just a clever double entendre title for a lesbian love story — it’s also a legit character in this film.

The Fish Child is a “thrilling romantic drama” — a gripping tale of forbidden lesbian romance and a crime heist gone wrong … plus some additional class issues. Maybe throw in some theft, a cute dog, human trafficking, and a gun fight and you have the whole package. So it’s still basically what every lesbian relationship FEELS like. But in this movie, it’s all really happening, NOT JUST IN YOUR BRAIN CONTAINER. 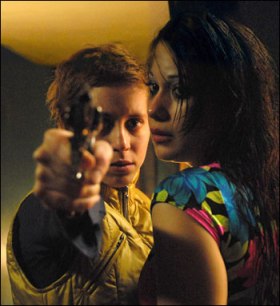 The true depth of the love story opens with the two young women sitting next to one another whispering confidentially:

Lala: “Then, don’t see him again. Him or anyone else.”

Emme speaking in Guarani: “I love you. I want you to be mine.”

Lala repeating it: “I love you. I want you to be mine.” Kissing ensues.

Unfortunately, that is the closest we come to seeing pure, untainted love between the two women. The scenes that follow are laced with crime, affairs, lies, and secrets. But as long as I’m not directly involved in any of it, count me in with a bowl of popcorn and a snuggie to watch the drama unfold!

You can buy the movie and read more about the plot via Wolfe Video, of course. The DVD is available July 26th, so mark your Autostraddle calendars!

In the meantime, google Mariela Vitale and Ines Efron. I promise you won’t regret it.

Oh, and it’s in Spanish, so if you don’t speak la lengua you may want to watch it with your reading glasses on duh.