Today marks the first day that same-sex couples in Illinois can finally be civilly united in the sight of the state government. It’s a huge milestone for a lot of individual families, as well as for the Midwest as a whole. Achieving the right to civil unions meant overcoming some serious opposition, and that controversy still remains. But for the most part, this is a day of celebration, and for the most part people are celebrating.

Frank Barcellos and Robby Davison have been together for 16 years and even had a commitment ceremony, but today is the first day the state of Illinois recognized them as a couple.

The couple was the sixth to receive their license in Winnebago county. They say they can’t wait to start sharing the benefits. 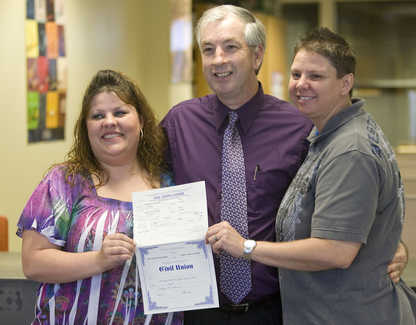 They aren’t without opposition; plenty of people are still holding out for legal marriage, and civil unions still feel like a weak compromise. And then there’s the traditional opponents, the anti-gay “family values” conservatives. For instance, David Smith of the Illinois Family Institute says that civil unions are “anti-family:”

And the Catholic Charities of Rockford, at least, have chosen to give up their state-funded status to pre-emptively avoid the possibility of ever being legally obligated to place an orphaned child in a home with gay parents who have been civilly united. It’s unclear whether this was actually a real possibility, or just an unsubstantiated fear, like the anxiety that socially conservative churches or religious communities will be forced to provide religious weddings to gay couples. On Top Magazine reports that “the charity services 11 counties and its decision could displace the 350 foster children it serves and leave 58 employees out of work.”

But despite the opposition, civil unions in Illinois are now a fact of law and of life, and couples all over the state lined up with pride and joy to finally get the recognition from their government that they have been waiting for seemingly endlessly. And the media seems to happy for them; there are plenty of stories about the very first license in each county. Because really, isn’t theirs the story that it’s important to tell? People like Tamara Vowell and Teri Schenk?

“She’s my best friend. She’s the only person I want to be with,” Schenk said. “She’s the one I want to spend the rest of my life with.”