One of the extra special magical funtime experiences of DOMA, and the limbo status that DOMA currently exists in, is the issue of what it means for gay binational couples. Historically, since same-sex marriages aren’t federally recognized, even legal marriages aren’t enough to grant a non-native citizenship, and even legally married gay couples can face deportation and permanent separation by the government unless they both decide to relocate to another country. When Obama declared Section 3 of DOMA unconstitutional, it was an admission by the government that the premise on which these deportations are based is faulty. So they should be done now, right? Well!

It’s complicated, obvs. For a little while immediately after the DOMA announcement, it seemed like they might be over. But then it seemed like maybe it wasn’t at all. But in the meantime, binational gay couples go on existing, and go on hoping against hope to be allowed to live in the same country! And with each case that goes up, there’s the hope that this will be the time when it changes. And sometimes, like this week, that hope seems somewhat justified.

Attorney General Eric Holder has “vacated the decision” of the Board of Immigration Appeals on the case of Paul Wilson Dorman, an Irish citizen living with his partner in New Jersey where they have had a civil union. What does this mean for other binational couples like Josh Vandiver and Henry Velandia? Well, not that Velandia, who is a Venezuelan national, isn’t necessarily going to be deported. It means that Holder is basically noting his personal specific reservations to the Board of Immigration – for instance, the fact that discriminatory treatment of same-sex marriage is unconstitutional – and suggesting that maybe they take a second look at cases like these. As Queerty puts it:

Now, this doesn’t mean that anything has been decided. The BIA could still take a careful look at DOMA and civil unions and decide, “no, we’re still going to deport gays.” But it’s equivalent to your boss saying “are you suuuuuuure you want to do that?” So if nothing else, it’s likely to give them pause… in other words: Holder is saying to the BIA: “stop this specific deportation. Look at what’s going on with DOMA. Think very long and hard about whether you should be deporting a couple that has a civil union.” (Our words, not his.) 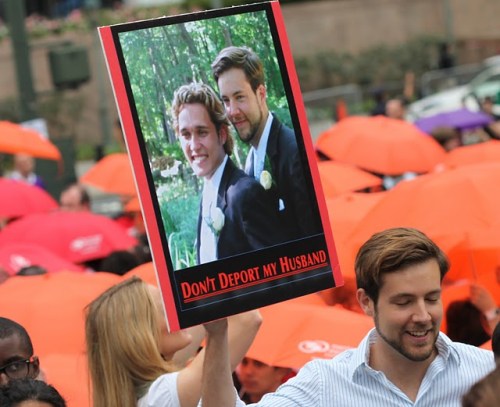 This is potentially great news for Vandiver and Velandia, whose case has drawn so many supporters that a protest is staged for today at 11 am in New Jersey for Velandia’s immigration hearing. But it may have implications that go beyond their family – plenty of people are wondering whether this signals a change in policy mandated from higher up, possibly by Obama himself.

“This development could be a sign that the Obama administration is looking for a way to protect gay and lesbian binational couples who are currently barred from the regular marriage-based immigration process by the Defense of Marriage Act,” said Lavi Soloway, co-founder of Stop the Deportations and Immigration Equality.

Of course, there are also those who see this move as less than redemptive, given the fact that it’s still very possible for Velandia to be deported, and given that some hold Obama personally responsible for the fact that we still have gay deportations at all:

On February 23, 2011, the Attorney General released a statement in which he indicated that Section 3 of the Defense of Marriage Act (DOMA) ‘will continue to be enforced by the Executive Branch.’ In his statement, the Attorney General made it clear that ‘the President has instructed the Executive agencies to continue to comply with Section 3 of DOMA… Please note that it was Obama who ordered agencies to continue deporting same-sex, foreign-born spouses.

The agencies involved have gone back and forth on this issue plenty of times already, and whatever the result of Velandia’s immigration hearing today, it seems unlikely that his fate will represent a firm and permanent stance on the subject of deportations of binational gay couples. The legal standing on this issue will likely change, and change again, and then be rocked once more by whatever eventually pans out with DOMA. But for the time being, we can hope that one couple will be able to to stay safe and happy together for at least the present, and that eventually, more people like them will be able to do the same.