Amid the celebration of Obama and the Department of Justice’s decision to no longer defend DOMA in federal court, there have also been warnings not to forget the attendant grain of salt: that this decision was not the same as a repeal, and that an actual repeal would be very difficult, given the stubbornness of the Republican-majority House on much less controversial issues. But this week we see what might be the first real consequence of the DoJ’s decision, and it’s more than even staunch optimists had hoped for: a bi-national gay couple has been granted an adjournment of deportation as they try to have their marriage recognized by the federal government. 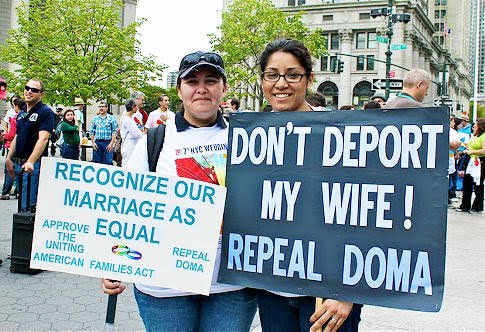 Monica Alcota and Cristina Ojeda have been together for four years and married for one, a marriage that was recognized on the state but not the federal level. Since Ojeda is a recent immigrant from Argentina, this is a scary thing – Ojeda has already been detained with the possibility of deportation once:

That’s exactly what happened to Ojeda –– for three months at least –– in 2009. As the couple traveled through upstate New York by bus to bring Ojeda’s belongings from Buffalo, where she had just finished up a master’s degree in social work, to Queens, where the two women now live, a spot border control check resulted in Alcota being detained by immigration officials. She ended up in a privately-run detention center in Elizabeth, New Jersey, from which she could have been deported at any time.

The threat of deportation has always loomed for the couple, and seemed to have come true when the hearing with Judge Bain was scheduled. The couple was in the process of submitting a Form I-130, a formal petition to have the government grant Ojeda permanent residency based on her relationship with Alcota, just like a heterosexual couple. In a deportation hearing yesterday, Immigration Judge Terry A. Bain ruled that Ojeda’s proposed deportation back to Argentina should be adjourned at least until December, allowing the couple time to pursue residency with the claim of their Form I-130.

The judge’s ruling is staggering, because it implies a belief that their request for recognition by the government could be granted. Bain’s decision means that, given the current status of DOMA, she sees at least a possible foreseeable future where Ojeda and Alcota’s marriage has the same legal status as a corresponding heterosexual couple’s in the eyes of the federal law. “It is almost impossible to overstate the significance of what happened in there,” Soloway said immediately after the hearing. “An adjournment based on an I-130. It would never have happened a year ago. I don’t think I even would have filed it.” Steve Ralls of Immigration Equality, which advocates for families like Ojeda and Alcota’s, says he’s hopeful that Bain’s decision might set a precedent for other cases; it would be welcome news to all of the other binational gay couples who also have to constantly fear deportation.

This ruling is excellent news, and tells us that at least some people in the know believe that the repeal of DOMA might not be far off. It’s not necessarily the ruling anyone expected, but as the couple’s other attorney Noemi Masliah says, it’s also “realistic in light of recent developments.” In declaring Section 3 of DOMA unconstitutional, Obama has made his plans for it fairly clear: to the extent that it’s possible with the attitude of the House, he wants it repealed. Even if he isn’t able to complete it before the potential end of his presidency in 2012, it seems unlikely that any political candidate can persuasively argue for its continued existence. As Nancy Pelosi recently pointed out, keeping DOMA alive is (literally) more than the government can afford right now, as is losing the millions of dollars that gay marriages would mean for the country’s economy. As the budget/union debacle in Wisconsin effectively demonstrates, even strong social conservatives aren’t willing to stand by Republican lawmakers if they play fast and loose with their constituents’ jobs, benefits or taxpayer money.

Ojeda and Alcota’s adjournment is until December; we may not see the end of DOMA by then, but it’s just as likely that they’ll simply be granted another adjournment at that time. Judge Bain is like a judicial canary in a coal mine; we may be finally reaching the point where it’s generally accepted that DOMA isn’t defensible on a legal, financial, or moral basis.