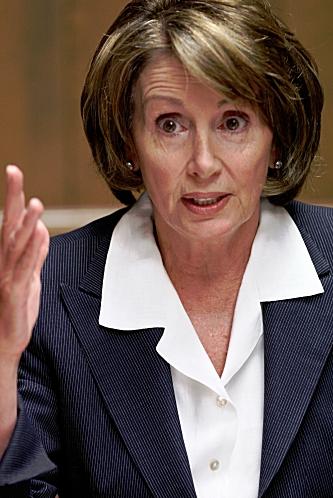 Pelosi Says WHAT THE HELL

The Republican majority House of Representatives isn’t pulling any punches as far as setting itself up in opposition to President Obama’s administration; you may remember their response to President Obama’s declaration that he would no longer have the Department of Justice defend DOMA in court, which was to suggest that the House hire its own lawyers to continue doing what the Department of Justice had deemed unconstitutional. Rep. John Boehner and his compatriot Rick Santorum haven’t backed down from that position, and now the former Speaker of the House (the position which Boehner occupies now) has some questions for them about how that’s going to work.

Republicans have been all about cutting spending, as is their custom, pressuring Democrats to abandon many social and government programs (as well as less obvious things, like collective bargaining, to questionable effect.) In light of that, Nancy Pelosi wants to know how much defending DOMA is going to cost. Boehner is apparently talking about hiring private outside lawyers, an enormously expensive proposition; their fees would be paid with taxpayer dollars, some of which will, of course, come from the queer people whose marriage rights are being withheld. In her letter to Boehner, she asks how he can justify something so costly AND unconstitutional.

The House Bipartisan Legal Advisory Group (BLAG) voted this week by a 3-2 margin to direct the House General Counsel to initiate a legal defense of the Defense of Marriage Act (DOMA). As you know, the Democratic members of the BLAG voted against directing the House Counsel to initiate the costly defense of a statute which many believe to be unconstitutional under the Equal Protection clause.

While respecting the role of the BLAG to make such decisions, I disagree in this circumstance because of the number of cases, at least 10. There are numerous parties who will continue to litigate these ongoing cases regardless of the involvement of the House. No institutional purpose is served by having the House of Representatives intervene in this litigation which will consume 18 months or longer. As we noted, the constitutionality of this statute will be determined by the Courts, regardless of whether the House chooses to intervene.

The American people want Congress to be working on the creation of jobs and ensuring the continued progress of our economic recovery rather than involving itself unnecessarily in such costly and divisive litigation.

Thank you for your responses to these questions concerning the cost and oversight of the litigation as it proceeds through the courts.

While we’re on the topic of government cost-savings, here’s another news story that’s possibly relevant: the government is currently so low on money that it’s passing an emergency measure just to maintain the funding needed to keep itself in operation for the next three weeks. The legislation currently on the table would reduce discretionary spending by $6 billion; no cost-saving legislation has been passed so far because Democrats and Republicans were unable to agree on the size and focus of budget cuts. So far every plan the Republicans have proposed has been rejected by Democrats as going “much too far,” and much of the cuts would be from education and human services: $1.6 billion to health and human services, $850 million in tax aids and credits, and $400 million to higher education. Republicans, meanwhile, have rejected Democratic proposals, insisting that they don’t go far enough; they say that government spending is out of control, and Democratic measures are just enabling it.

So far, no one in the House seems to be bothered by the fact that Boehner’s plan would cost the government (and taxpayers) money that doesn’t exist, especially since the marriages it’s preventing would put significant amounts of money back in the state and federal government’s pocket. It would seem that the classically defining characteristics of the Republican party – cutting government spending and government interference in the personal lives of citizens – have officially taken second place to an all-consuming obsession with denying minority groups full participation in American life.