It appears that we lost two more lesbian TV characters on The Vampire Diaries last night. Heather is at the tail end of her vacation and will do the research to report back to you on in Tuesday’s Boob(s On Your) Tube. We’ll also see the return of Empire, a late but great peek at this week’s Grey’s Anatomy, and some much needed queer sitcom happiness. In the meantime, Lexa’s funeral happened last night, and the episode was even more abysmal than I imagined. 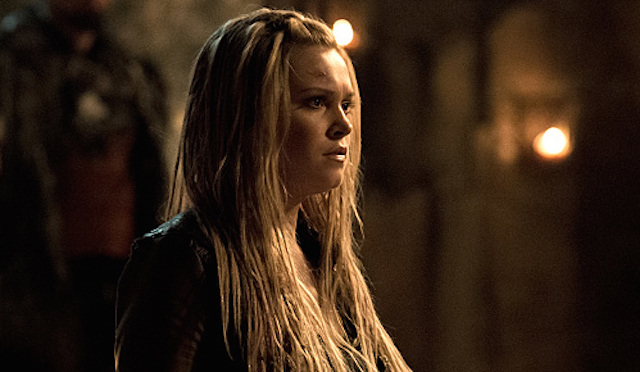 What’s under that cloth?

The name kept repeating in my head. My heart pounding in my chest, blood pounding in my ears, sweat pouring out of my body, and adrenaline sitting in my legs with nowhere to go. This was a panic attack. My third in three hours. I’ve never felt them at this rate or severity before. They’d fade after 10-15 minutes and then return right when I let my guard down. That’s what it felt like at least, but of course it was completely out of my control, guard up or down.

This was six days after Thirteen aired. A few factors probably contributed to my attacks, but my brain-on-fire chose Lexa to repeat in a voice that didn’t entirely sound like my own. It sounded like something far away, like in that space between dreaming and consciousness when you don’t have any control of where your mind is going. Except I was wide awake. The next day after my attacks I felt so drained, but I also felt afraid. What has happened to me?

My life was in hyperdrive but Lexa hadn’t left my thoughts at all. I’m in graduate school full time, TA two classes, and I have another part time job in the evenings. And I was hurdling toward midterms. I wrote my recap for Thirteen in a one hour break between class and work, with little sleep and no food. In fact, in the days between the episode and my panic attacks I hadn’t eaten more than one meal a day, some days only snacks. I remember being genuinely amazed by this because I’m hypoglycemic: usually if I don’t eat every 4-6 hours, my blood sugar crashes and I become seriously ill. But I didn’t feel shaky or fatigued or hungry. I was in starvation mode. This was truly affecting me physiologically. It wasn’t until I had my attacks that I realized how much.

“Grief isn’t in stages, it’s continuous cycles,” a friend told me. And I felt them.

Yes, I was angry. Yes, I was sad. Sometimes switching back and forth, other times simultaneously. They won’t get me again, I swore to myself on my drive to school one day. They won’t fucking get me to buy into this again.

But I was also ashamed. How could I have had such hope? How can I feel so upset about a character? Why couldn’t I just cry then heal like I have with so many others before her?

When I tried to explain what was going on to my coworkers and family I couldn’t stop smiling because I realized just how ridiculous it would sound to them, and immediately felt uncomfortable. (And when I feel uncomfortable in social interactions, I smile). Thank God I have my friends online who understand. I can’t imagine how much worse this could have been without them. We went through this together.

Thankfully I was talking to my friends right up until last night’s episode because I was dreading it. It was the funeral and the first 13 minutes had already been released. I had avoided watching them, but heard what happened. But I knew I had to watch it. This may be triggering.

Clarke and Murphy have been held in Clarke’s bedroom for the last 24 hours, where Lexa’s black bloodstains still remain. The nightbloods have been summoned for the conclave. Titus wants to let them go, but Clarke wants to see Lexa. They go to the ceremony room. Lexa lies in a sheet, and Aden is performing a ritual, with all the other kids on their knees behind him. Clarke keeps herself from getting too emotional: she wants to confirm with Aden that when he becomes commander (he was Lexa’s favorite after all), that the SkaiKru will be safe. Aden assures that whoever is chosen will protect Clarke and her people; Lexa made all of them vow it. They loved her.

This tender moment is ruined by Ontari and Roan, who have returned from Ice Nation for the conclave. Ontari is a nightblood so she must be allowed to compete for the “flame” (the AI in Lexa’s neck). Ontari has no intention of competing fairly. Clarke doesn’t want to leave until she is certain Aden is chosen and tries to persuade Titus to make sure he wins. And while they argue, Ontari slaughters every single young nightblood, dousing herself in black blood. When the crowds are summoned to the ceremony room, Ontari shows them Aden’s head.

They do not show the murders, they do not show Aden’s head, but the violence of this act strikes deep because of how senseless it is. Just like Lexa, these children are murdered 90 seconds after they show emotion, the minute they express love and grief.

Later, Clarke reminds Titus of the nightblood who wasn’t killed at Lexa’s conclave. Her name is Luna and Clarke conveniently remembers that Lincoln knows where she is. Titus gives Clarke the flame and a book with the Ascension ritual inside. This is all neat and tidy storytelling and doesn’t make any practical sense. But it’s all for naught. Ontari realizes the flame is gone. Titus commits suicide and the camera hovers over it for way too long (who directed this episode?). Ontari just decides “tell the people I’ve ascended, they won’t even check.” Why has this never happened before, if this is an option? Ontari is the commander anyway and will attempt to wipe out SkaiKru. Good riddance, really.

In Arkadia, everything is still awful. Bellamy has had a change of heart and he has a hard time understanding why people are mad at him? Octavia chains him up with Indra while she attempts to rescue Kane, Sinclair and Lincoln from their executions.

While they escape, Pike announces on the radio that if Lincoln doesn’t turn himself in, all the grounders in jail will be executed. Lincoln can’t let his people be slaughtered, so he surrenders. He is led into the middle of Arkadia in chains, pushed down to his knees, and shot in the head. He was shot because he loved his people and wanted to protect them. Octavia looks on from outside the gates. She weeps leading up to the execution but after it’s over, her face hardens into steely resolve. Women have to suck it up, you know.

These deaths hurt because there is no hope. In the beginning, I believed the point of this show was that we have abilities inside ourselves, like strength, adaptability, pragmatism, wisdom, and capacity to love already that make us able to survive in a world like The 100. But not anymore. Now this show is trying to say that if you love someone, that if you have hope, it will be robbed from you. Is this the kind of story they really want to tell?

I still think of Lexa often. I still feel sad and angry at times, but it’s quieter now. I’m comforted knowing there are so many others like me, and I know now we shouldn’t feel ashamed. We contributed to some real good with the Trevor Project fundraiser. We’re holding creators accountable and gaining attention from so many mainstream sites. Our fight isn’t over. Ste yuj.