Hey y’all, Tegan and Sara are releasing some new swag, this time in the form of a CD/DVD set called Get Along. The two-disc set includes a live record as well as three films titled ‘States,’ ‘India’ and ‘For the Most Part,’ which follow the girls on tour, selecting clips from their 12-year career. I don’t really like promoting merchandise ’cause it makes me feel like a big trend pimp, but I also feel like I would be doing you a disservice if I failed to mention that the deluxe edition also comes with three limited edition posters and four bonus digital tracks. 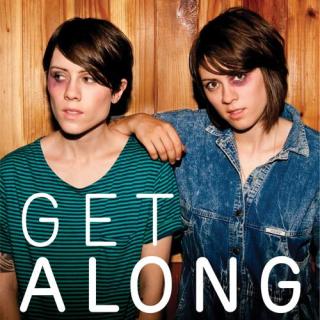 i hope i never figure out who broke your heart

So, besides being a huge lesbian stereotype/fangirl, why should you care about these new T&S items? Well.

I was 17 in 2007 when Tegan and Sara’s fifth album, The Con, dropped. It was more or less the summer of my coming out, and consequently, my first experience leading the double life of a newly-outed gay. By day I was a slightly awkward, maybe bisexual camp counselor plugged into The Con on repeat on the bus to and from upstate New York every day. At night I would peruse the Internet attempting to make sense of my intense, and seemingly inexplicable, attraction toward this band’s music. This summer, by no small coincidence, was also the summer that I developed an affinity for bandanas and skinny jeans, which is another story entirely. This was also two summers before the birth of Autostraddle (we we ever so young?), and that year, all Google searches of Tegan and Sara led to once place — saraandtegan.ca. For the next year, I lived on this website. After school, on weekends, all night, meeting and talking to girls across the country and around the world (including, of course, one Miss Emily Choo). I never told anyone in ‘my real life’ except for my then-girlfriend, and even then, not until months had passed and my ties to these people had become undeniably real.

Becoming a fan of Tegan and Sara and the process that it took me through was the first time I was ever exposed to any sort of queer community — and the first time that I realized that community is something real that can be found online. In that community I found a support group, a core group of friends, and – cheesy as it may sound – power and identity within myself. I knew for the first time that my sexuality was valid, that I was not alone, that there was a future for me (and girls like me), and that that future was going to be huge. 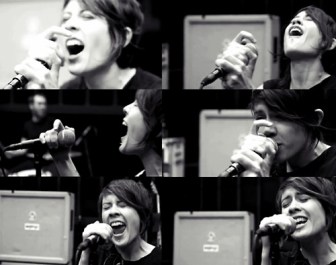 nobody likes to but i really like to croy

It’s been almost five years now, and what was once that future is now our present. These friends that I’ve made, we watched each other grow up. We who were once a huddled mass of closeted and confused high school kids are now becoming the most talented, passionate, interesting, diverse, and self-assured individuals I have had the privilege of knowing. We don’t talk every day anymore. Some of us don’t talk anymore at all. But we grew up together in a small slice of our generation. We came out to ourselves and each other while listening to the same songs.

And even though this experience has been something personal for me, I hope the feeling is not exclusive or unique. I’m not sharing this necessarily because I want you to own this box set, but because you too were a babygay once. Maybe you still are. I just wanted to post this up as a reminder that the things in our past are really important to us, and the things and people who helped us discover who we are never really leave.