Have you guys seen the amazing slice of heaven Tina Vasquez, Mia McKenzie, Julio Salgado and Reyna Wrath posted at Black Girl Dangerous yesterday? “Unfit For Product Placement: Radicalizing the Cartoon Characters Of Our Childhoods” is my absolute favorite thing on the internet right now. (And that’s saying a lot, since we’re doing our best to fill the internet with sandwiches today. But this Black Girl Dangerous article is next level, fulfillment of childhood dreams awesome.)

Here’s the setup: a couple weeks ago, there was this Swagger New York article going around showing certain 90s cartoon characters as stereotypically tall, thin, rich “it girls” dressed in DVF, Rodarte, Marc Jacobs, etc. to “take on” New York fashion week/sell the public on capitalist consumerism and traditional beauty ideals. McKenzie and friends took one disgusted look at the images and wondered: “how could we parody them in a way that both poked fun at their original product-placement-readiness while also making a point about growing up and becoming who we, and our friends and communities, became (hint: we are not NY fashion models)?” 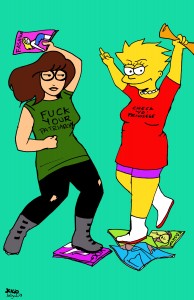 Grown up Daria and Lisa share a love of dismantling patriarchy, smashing mainstream beauty standards, and using their middleclass, cisgender, heterosexual, white girl privilege to fuck shit up from inside .

The writing is fantastic. The art is spot on.  And the stories of our favorite childhood cartoon characters grew up are sheer perfection.

So what are you still doing hanging around here, weirdos? Go read it!