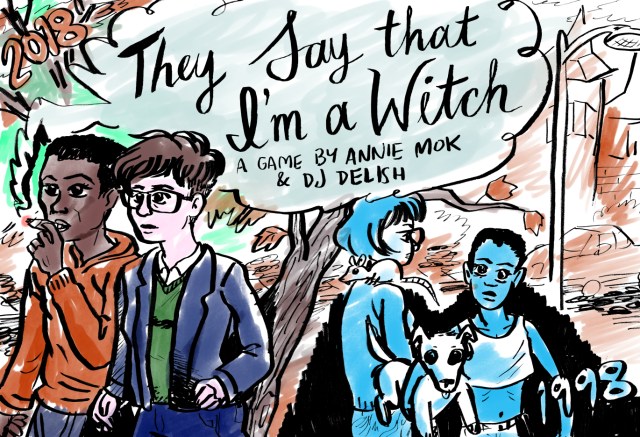 Annie Mok is a cartoonist, illustrator, and musician who lives in Philadelphia. I don’t remember when I first came across her work — maybe I was searching for other trans woman artists on Twitter? — but I was struck by it immediately.

Her comics vacillate between charmingly smudgy, nervous, and chaotic, and intricately detailed. They are always incredibly personal, disarmingly matter-of-fact, and intimidatingly gorgeous. They are mostly about her own life and ideas, and often discuss or utilize nerd culture to explore big ideas (Knuckles Comics uses Sega’s Sonic franchise to discuss Proust, for example). Many of her comics center around video games, and recently she decided it was time to create her own!

“They Say That I’m a Witch” was created as a collaboration between Mok and DJ Delish, who co-wrote the story and also provided its soundtrack. It isn’t a “video” game, per se. It doesn’t have any video, or even visual, elements. Instead it’s a text-based “choose your own adventure”-type game; you select from two protagonists (semi-autobiographical versions of the creators) and go through vignettes in their life, switching between 1998 and the present. At certain key moments, you’re required to make a decision, which will affect your path through the game — like a WRPG or a Japanese visual novel.

I don’t want to give away any of the story, because the game is quite short — it can be completed in a single sitting. That being said, playing a game with a trans woman protagonist was exhilarating. Traveling back in time to school days, and getting to confront one’s bully, hit me viscerally. I found myself going through the game over and over, choosing all of the different options to see how things would play out differently, and trying to conceptualize the simultaneous paths of both protagonists and how their stories mirrored each other thematically.

The game works best in the Chrome browser and can be downloaded from Annie’s Gumroad for only $2.00. At that link, you can see many of her other comics and games, much of it free! This TDOV, support an independent trans woman creator and have some introspective fun while you’re at it!

Abeni has written 88 articles for us.