Sundance darling Tallulah has all the makings of an indie hit. It’s full of complicated relationships, dark and pedestrian secrets, and a plot driven by characters who are at once sympathetic and kind of awful. It successfully avoids clichés — there are no manic pixie dreams to be found, for example — and the original writing combines with an all-star cast to create a movie worth seeing on the big screen or on Netflix, where it was released Friday.

Throughout the film, we don’t know much about Tallulah, or Lu’s, past, except that everyone who was supposed to take care of her let her down. We meet Lu (Ellen Page) as a drifter in her 20s who has nothing but a van and a boyfriend, Nico, who says ‘I love you’ before they fight and he leaves to make his way back to New York to find his corner of Washington Square Park and his mother.

When Lu wakes up to find him gone, a new part of her journey begins. She beats Nico to his home and his mother Margo (Allison Janney) slams the door in her face. In a short interaction, the curiosity and tension between Margo and Lu is clear. But they have no common ground except a boy who ran away from them both. The link is based in pain, and it’s simply not enough — not yet.

This is where I should mention that this isn’t a May-December lesbian romance. Janney and Page revive and expand upon the chemistry they shared as step-mother and daughter in Juno. But it is a movie about women — about women who have been abandoned, who find each other, who hurt each other deeply. It blows the Bechdel test out of the water; the men who have betrayed these women are largely foils for their own self-discovery and growth. The film adeptly interrogates class, though not race — all the main characters are white, though Uzoamaka Aduba does a beautiful job in a supporting role as a social worker.

Janney and Page are joined by Tammy Blanchard, who plays Carolyn, a new mother and trophy wife who leaves her toddler Maddie with Lu in a hotel room while she gets wasted and leaves to hook up with a relative stranger.  Long story short, Lu feels Maddie isn’t safe with Carolyn and steals away with her in the middle of the night and goes back to Margo’s baby in hand, claiming she is hers and Nico’s. Margo takes them in, and she and Lu slowly become something like friends. 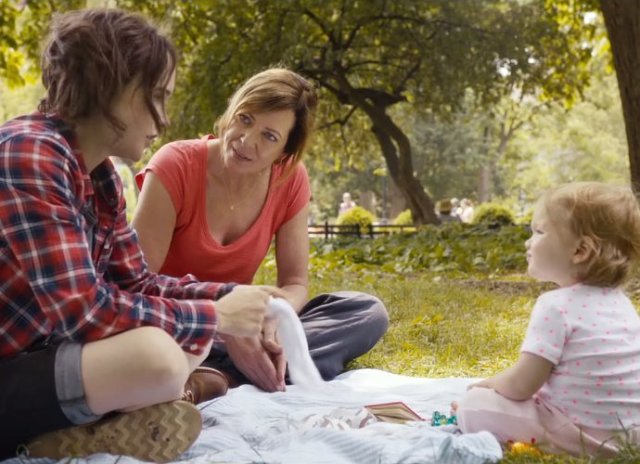 Although Margo and Lu are the main draw, there are a lot more elements to this movie. Lunch with Margo’s gay ex-husband and his new partner is one of the best scenes in the film, sketching a whole universe and providing a window into Margo and her husband’s marriage without trying to give more information than the audience can handle. There’s the undercurrent of disappointment created by Nico’s silence and absence, and the fear of Carolyn’s husband’s emotional abuse that helps explain her behavior — that and some very obvious but unnamed postpartum depression. There’s the mix of tenderness and mistrust that grows between Lu and Margo. And most of all, there is Lu’s lie and the ways it begins to unravel.

The story is rich, and the writing and direction — headed up by Sian Heder, who writes for Orange Is The New Black — feel balanced and believable, even when the story dips a bit into fantasy. And the trio of impeccable and perfectly-cast actresses form the foundation of a moving film about three women trying to get free from their mistakes and disappointments.

The film soared at Sundance, and now it is available for streaming on Netflix.