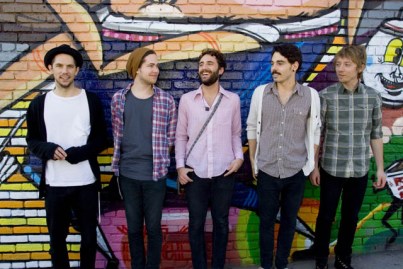 This LA-based band released their debut album, Gorilla Manor, last month in the U.S. and though it’s been floating around in the U.K. for over a year, it’s just starting to gain momentum. At first glance, Local Natives seems like just another nondescript indie rock band. There’s a lot of music to sift through lately, after all. But give their album a listen, and you’ll realize that this band stands out among the rest.

Local Natives features three-part harmonies that I can only liken to the hobochic phenomenon. Unlike the perfectly choreographed voices of a band like Fleet Foxes, Local Natives sound like they’re winging it. Yet their songs’ construction is too elaborate — too unusual — to write off as unplanned. When they’re not busy harmonizing, guitarist Taylor Rice and keyboardist/percussionist Kelcey Ayer trade lead vocals while guitarist Ryan Hahn lends his voice for back-up.

Ayer’s percussion, combined with that of drummer Matt Frazier, is another Local Natives’ hallmark. Their polyrhythyms make each and every track from Gorilla Manor a joy to deconstruct. These guys love snare like Christopher Walken loves cowbell. To those with a less critical ear, don’t be dismayed — this album is accessible to all, and you won’t find yourself skipping any tracks.

Check out their video for “Airplanes” below or click through to listen to my favorite track, “World News.” You won’t be disappointed! (Or if you are, let me know in the comments.)

Local Natives are playing a whopping NINE shows at SXSW, so be sure to catch them at one of them if you’ll be there. You can find dates on MySpace.