Before writing blurbs for Boobs on Your Tube, I never would have thought that writing a brief summary of a single episode of Survivor would make me feel deeply emotional.

But that’s because until this season, we didn’t have Karla.

She’s the quiet manipulation of Parvati Shallow, the blunt charisma of Sandra Diaz-Twine, the intelligence masked as unthreatening dorkiness of Aubrey Bracco. But more than any of that, she’s Karla Cruz Godoy — distinctively, irreplaceably, disarmingly, authentically herself. And that whole is a whole lot greater than the sum of its parts.

This week was Karla’s episode. And I’m gonna say it, this is starting to feel like a winner’s edit. I sincerely hope I’m not wrong.

At the start of this episode, we learned that James left Owen out of the previous Tribal Council vote, which will become relevant later on. This episode’s challenge was both an immunity and a reward, in which the remaining tribe members were split into two teams of five each — meaning there would be two winners, and two people sent home, at two separate Tribal Councils (one for each team). This challenge was a hands-and-arms endurance challenge — and remember, Karla totally busted up her hand in an earlier challenge! She literally has stitches CURRENTLY!!

This season has voted out so many women, so early on, and before long, Karla is the last woman standing, up against only Sami (on her team). Gabler, from the sidelines, cheers, “Way to go, big boys, hang in there!” and without missing a beat, Karla responds, “What about the big girls, huh?”

I hope someone writes a whole essay about this moment. Just before her comeback, Karla didn’t look happy. She looked exhausted, and like Gabler’s comment only further exhausted her (on top of, you know, being starving and dehydrated, etcetera). Even while saying it, she seemed exhausted (understandably). But after she said her instant-Survivor-canon line, she looked absolutely freaking thrilled! Just beaming! GLOWING! I’m pretty sure she knew, in that moment, she had it in her to win this challenge.

And guess what? She fucking did. Of course she did! She’s Karla!!! 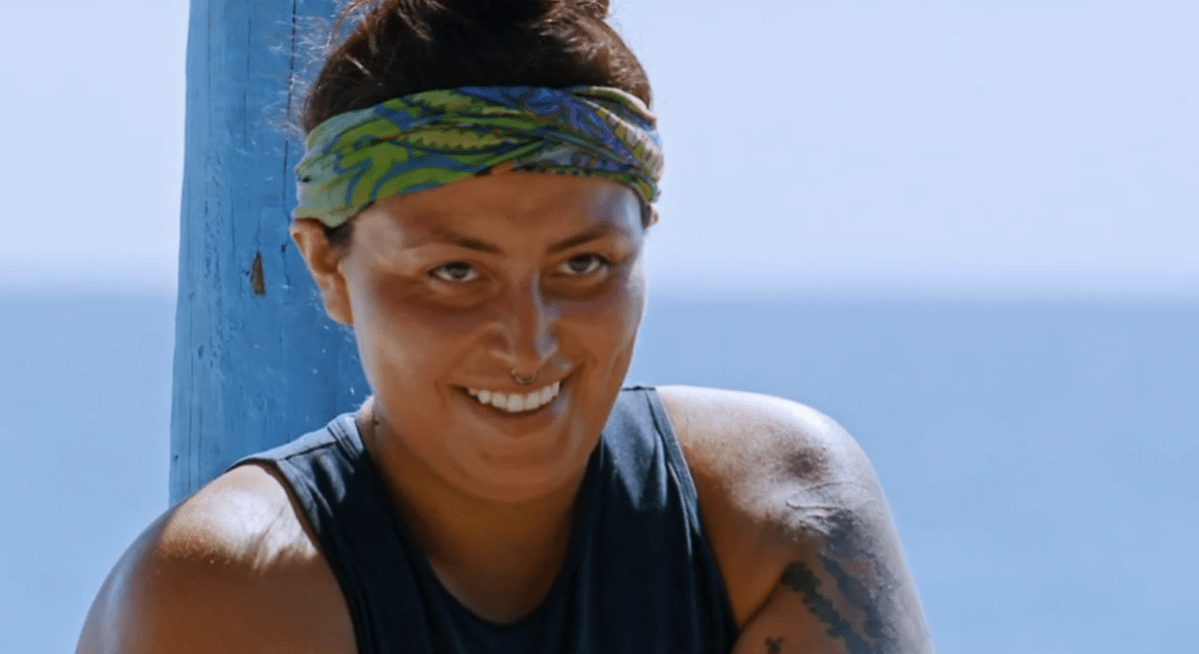 Caption: Karla putting a man in his place, as she should, thank you Karla, we love Karla

On the other team, Cody won immunity, and he was the last standing overall, so his team got the reward. The two teams then branched off to two separate tribes. Cody’s team debated whether to send out Cassidy or Ryan. The most important part of this is that the main reason they wanted to keep Cassidy was because they thought that getting rid of her might anger Karla and James, since they three are allied. Even when she’s not there, Karla’s calling the shots!

Back on Karla’s team, Owen and James got into a screaming match, and Karla was quite literally trying not to laugh. Love this for her. Karla wanted to keep James, because he’s her ally, and Sami, Noelle, and Owen wanted to vote out James. Noelle decided to use her steal-a-vote to steal Owen’s vote, so that James isn’t suspicious and therefore doesn’t try to use his Knowledge Is Power advantage. The best part of all this was that Sami tells Karla this whole plan, because, wait for it, “Karla’s opinion matters more to me than anything else right now.” Karla has done it again! Like a mob boss in sheeps’ clothing, she somehow is able to appear non-threatening, while also inspiring just about everyone around her to value her opinion above, well, everything! It’s like this game was made for her. At Tribal, it all goes according to plan — James goes home. Karla may have lost an ally, but frankly, I’m not worried. Everyone seems to want to be her friend/beta/sub!

The second Tribal was quite straightforward and honestly boring because of the lack of Karla. Ryan got sent home, implying that Cody and Jesse’s main priority was not upsetting Karla. (They saw James was out at that point, so they couldn’t have cared too much about upsetting him. Incredible.)

After the episode ended, I was still thinking about Karla’s confessional after winning immunity, in which she explained how she managed to pull off the win: “It’s all because of believing and trusting,” she said. “In me.”

Well, queers, there you have it. Struggling to embrace your identity? Trudging through taxes? Just having a really freaking bad day? You know what to do: believe and trust. In you!