The Supreme Court is currently considering a number of issues that could make a major difference in what the future of America looks like, from affirmative action to same-sex marriage. Today they made a ruling that seems more fitting for the past than the future — they struck down a key component of the Voting Rights Act, specifically the portion which requires states to get federal permission before they can make changes to their voting laws.

The Voting Rights Act dates back to 1965, and was created in response to the fact that discriminatory and racist voting laws, like the practice of requiring that citizens pass a “literacy test” (when black citizens’ access to education was severely restricted), disenfranchised many black and African-American voters across the nation. The VRA instituted federal oversight of voting practices, requiring that states with a history of voter disenfranchisement get clearance from the Department of Justice before making any changes to their voting laws. The VRA has been renewed four times; the most recent renewal would have kept the Act in place until 2031. But after the most recent election, Shelby County of Alabama brought a case arguing that since they had basically equal voter turnout from black and white voters, the VRA was unfair to them and no longer needed. 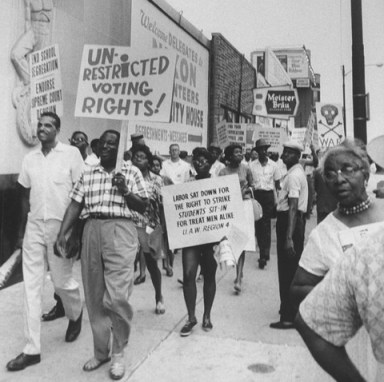 Today, the Supreme Court agreed with them, by a vote of 5-4, declaring the provision which requires federal clearance for certain states to be unconstitutional. The part in question, Section 4, designates which states are to be singled out for federal clearance, was still using data from 1975. Shelby County’s claim, which the court has supported, says that data is no longer reflective of reality; essentially, that we have moved on from the kind of racial discrimination that was commonly practiced in 1975 and no longer need laws to protect citizens from it. The decision was written by Justice Roberts, who said that:

“In 1965, the states could be divided into two groups: those with a recent history of voting tests and low voter registration and turnout, and those without those characteristics… Congress based its coverage formula on that distinction. Today the nation is no longer divided along those lines, yet the Voting Rights Act continues to treat it as if it were.”

Whether or not Justice Roberts thinks that the nation is still ‘divided,’ the country has seen its fair share of controversy over voter laws in the past few years that, for many, call into question whether voter discrimination is truly a thing of the past. Literacy tests are no longer a common practice, but a law in Pennsylvania that would have required very specific photo identification for voting was halted just before the election in November 2012. Much like literacy tests, these laws don’t include any language that specifically discriminates against people of color; purportedly, they exist to protect against voter fraud, although no legislative body has ever been able to prove that voter fraud is attempted often enough to be a legitimate concern to anyone. But a 2012 study found that voter ID laws would in fact “disproportionately demobilize” young voters of color, who were much less likely than other groups to have the photo ID that voting required. The study found that “overall turnout… by young people of color ages 18-29 could fall by somewhere between 538,000 to 696,000 in states with photo ID laws. …Nine percent of whites don’t have such ID, compared with 25 percent of blacks and 16 percent of Hispanics, the Brennan study said.”

Additionally, in 2012 the Williams Institute found that voter ID laws “may create substantial barriers to voting and possible disenfranchisement for over 25,000 transgender voters this November.” 41% of transgender citizens surveyed said they didn’t have an updated driver’s license, 74% did not have an updated passport, and 27% had no documents that listed their true gender.

For context, these are laws that are already perfectly legal and enforceable even with the Voting Rights Act in place. Without the VRA, states would have freedom to go much further than this without any pushback from the federal government. Laws like Arizona’s SB 1070 are a reminder that many states are perfectly willing to pass laws that openly discriminate against people of color, and there appear to be very few, if any, consequences for them.

Justice Roberts acknowledges that the fact that many states have racially balanced voter turnout is probably a result of the Voting Rights Act, but doesn’t explain in his decision how or why the benefits of the VRA would continue without the VRA in place. Analysts across the board have argued for some time now that one of the GOP’s major challenges is winning the Latin@ vote; without the VRA, there’s no need to work to create a platform that will appeal to Latin@ voters when they can just create laws that will make it difficult or impossible for Latin@s to vote at all. They won’t even have to wait to do so — the Supreme Court’s decision is taking effect immediately, and a voter ID law in Texas is already moving into place.

Congress remains “free to try to impose federal oversight on states where voting rights were at risk,” but Roberts’ decision requires that they do so using “current data.” In addition to collecting and analyzing new data, Congress would also have to come to an agreement about which states require federal oversight, which is very unlikely given how politically divided and contentious the current Congress is. In her dissenting opinion, Justice Ginsburg wrote that:

“The great man who led the march from Selma to Montgomery and there called for the passage of the Voting Rights Act foresaw progress, even in Alabama… “’The arc of the moral universe is long,’ he said, but ‘it bends toward justice,’ if there is a steadfast commitment to see the task through to completion.” That commitment has been disserved by today’s decision.”

President Obama has expressed “deep disappointment” with the decision. He makes that comment not only as the President, or as the nation’s first black President, but as someone who’s often co-opted as proof that America has moved beyond racism, when in fact his entire life is testament to the contrary. Frustratingly, his election provides many with the means to reassure themselves with the thought that the institutional racism the Voting Rights Acts works against is over, when in fact it’s unlikely Obama could ever have been elected without the VRA’s protections (it’s no coincidence that the spectre of “voter fraud” and voter ID laws which coincidentally target voters of color reached new heights of popularity during his re-election campaign). But Obama’s campaigns, especially his first, were marked by intense organizing effort for voter education, voter registration, and activism for voters’ rights. In light of the Supreme Court’s decision, the nation will have to once again rely on these tactics and more if it wants its marginalized citizens to be actively represented in its government.