Previously on Supergirl, we were down to one Worldkiller, Supergirl decided to travel literally to the ends of the Earth (and beyond) to get a rock for Lena, and Alex started taking care of a traumatized Ruby who saw her mom go bad.

Supergirl heads out into space to what she was lead to believe was a random meteor, but upon arrival she discovers that there’s actually a secret city on it. So she turns the spaceship into a meteorite to camouflage her way to the surface.

Down on Earth, Reign is gaining immunity to Lena’s kryptonite faster than they originally thought, meaning Supergirl’s rock-fetching timeline is tightening and they have no way of contacting her to let her know. So all they can do is twiddle their thumbs and hope she makes it back in time.

In Alex’s loft, Ruby is stressed about the whole situation, but Auntie Alex lets Ruby know that she has all the faith in the world in Supergirl and that worrying won’t get her here any faster. 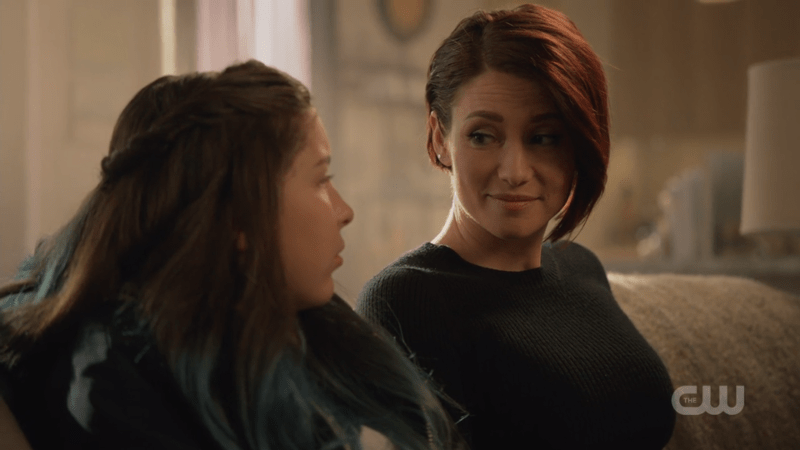 “Just look at my hair. There, don’t you feel better now?”

To keep her mind off things, Alex uses the age-old tactic of ice cream and shopping to distract young Ruby. At first it seems to be working, and their dynamic is very adorable, and things are going well…until Alex tries on some sunglasses and sees someone lurking in the mirror like it’s some kind of horror movie. 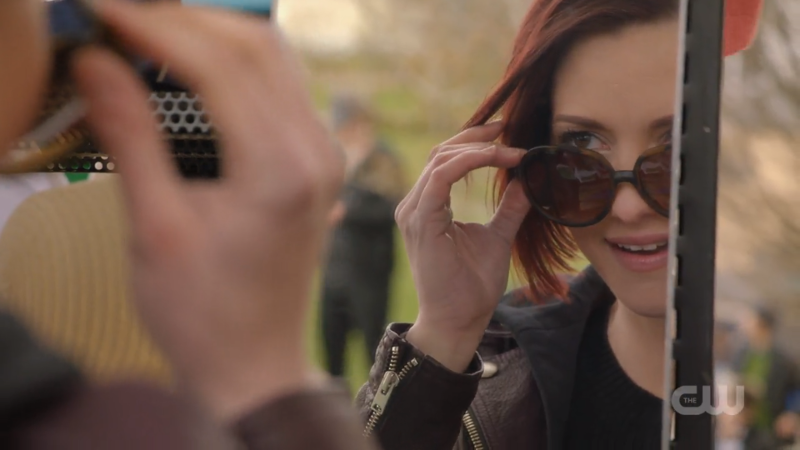 That someone starts shooting at her and tosses a grenade at her which she scoops up like a softball star and shoves in a hot coal bin (??!!) and escapes without a scratch.

While this is going on, down in Lena’s Lady Lab, Reign is full-on taunting Lena with sultry sass. 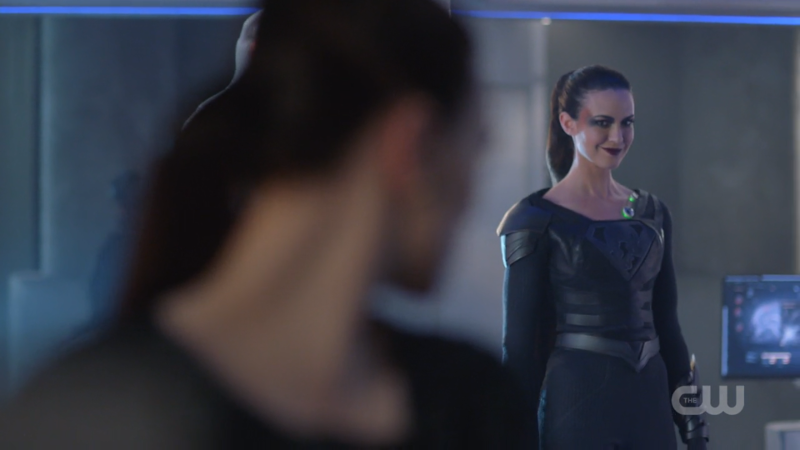 The longer Reign is here, the more I love her??

Lena tries to dish the sass right back but then Reign starts to get real with her, feeding on Lena’s fears, saying Supergirl won’t need her anymore once this Worldkiller business is over, saying that the only way to stop her is to kill Sam. She doesn’t think Lena could do it, and frankly I don’t think Lena does, either. 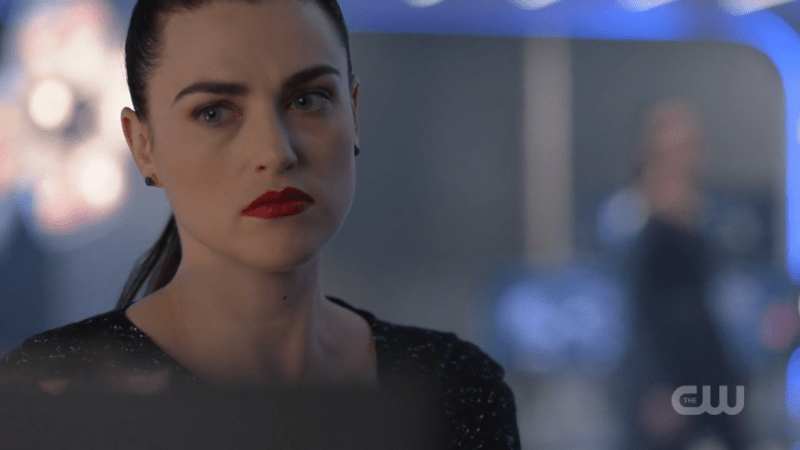 After the incident in the park, Alex takes Ruby to the DEO, because this “secret organization” is now sort of like the restaurant in New York that is supposed to be an unknown speakeasy but also you can’t get in without a reservation. The worst kept secret, is what I’m saying. Alex sends Ruby off to read and then gets serious: someone is trying to kill her. 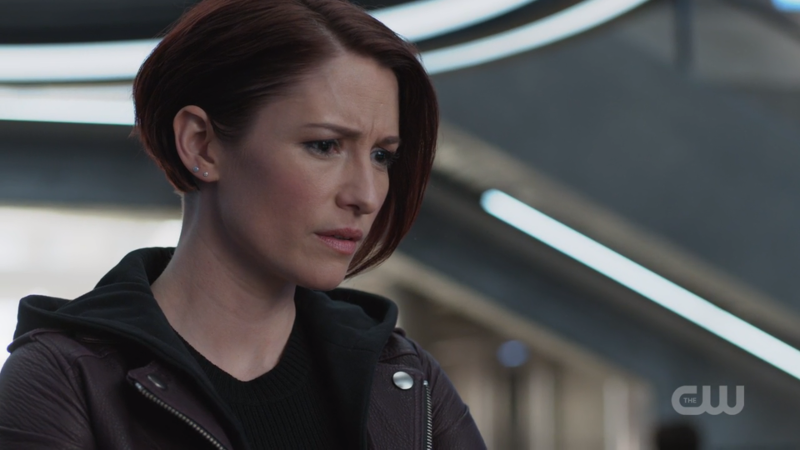 “What? I can’t die. Twitter won’t stand for it! #lesbianlives”

And Alex’s speech about it is so very Alex because in the same breath she talks about the death threats against her specifically she worries about what that means for Ruby, since she’s in her care until Sam gets better. But her friends are on the case, so she needn’t worry.

They narrow it down to Ronald Collins, who Alex credits as her first arrest, but she was 17 and it was the case her and Kara Harriet-the-Spy’d back in high school, so I’m not sure I would call it an ARREST necessarily, but either way there’s reason to believe he’d be holding a grudge against our girl.

When Kara gets to the mystery meteor city, she starts to head to where the black rock she needs is and finds herself being shot at. She runs into town and realizes her supersuit stands out in the sea of beige so she borrows a cloak and continues on her way.

She finds the building that houses the black rock, and Kara reads the writing on the wall—literally, there are Kryptonian words on the walls—and realizes it’s a Kryptonian memorial. Realizes that this city somehow, impossibly, is Argo, the city she was born in. As she realizes this, her mother appears. Her not-dead-after-all, new-face mother. 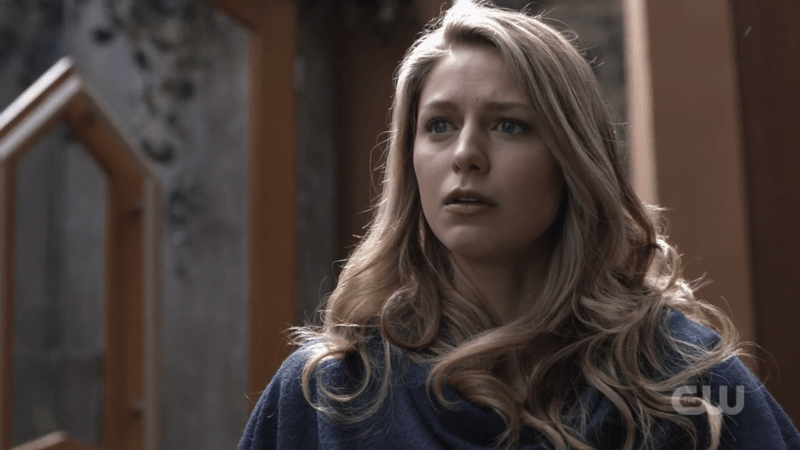 Kara’s mom saw her pod get knocked off course and has spent all these years assuming she was dead. Kara thought the same about her, what with the whole planet exploding, and they both feel guilty for not looking for the other. But Kara doesn’t really have time to reminisce right now, because Earth is in trouble and they need some of that black rock. The only issue is, the rock is their life source, their shield, their atmosphere. They need every bit of it to survive, so even though Kara only needs a small chunk, it’s going to be up to the council if they can take it.

Alex heads out to confront the man she thinks is trying to kill her, finding him in a bar, unamused yet generally unfazed by her approach. 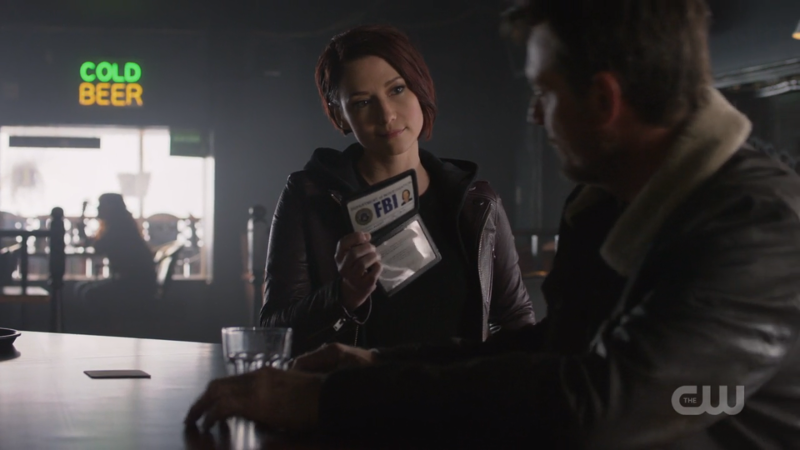 After talking to him for a while she realizes that this man is far too busy wallowing in his own self-pity and guilt to be hunting her down. Alex leaves the bar, confused, and hops on her bike, only to find out that it’s been rigged to explode so she jumps off it and she’s fine but her BRAND NEW BIKE IS DECIDEDLY NOT. 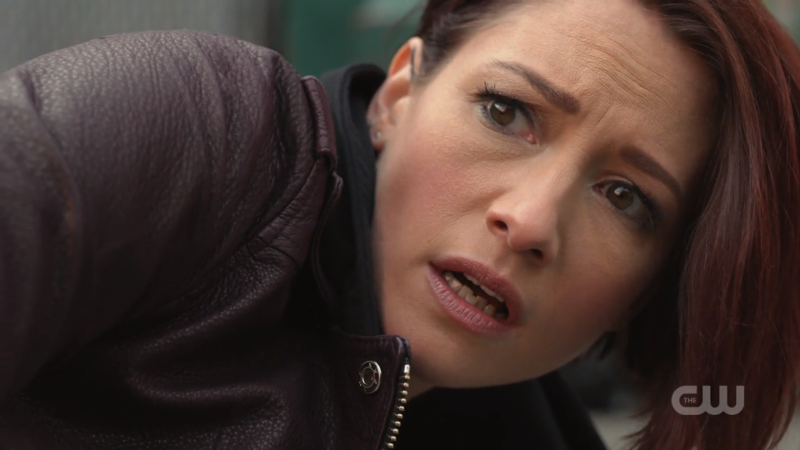 Alex’s next plan of attack, instead of chasing down every other bad guy she’s ever cuffed, is to lure the guy out. So she sets a plan with J’onn and springs ot action.

In Argo, Kara reconnects with her mother and I’ll be honest with you, I spent the entire time assuming it was a trap. Kara just seemed so…calm. She was more emotional when she saw her mom-hologram. Maybe because she knew it wasn’t real? Maybe Kara is in shock. Either way, she excitedly tells her mom about her life on Earth, about her Best Mom Eliza Danvers, and her sister, who is also her best friend and generally just amazing. 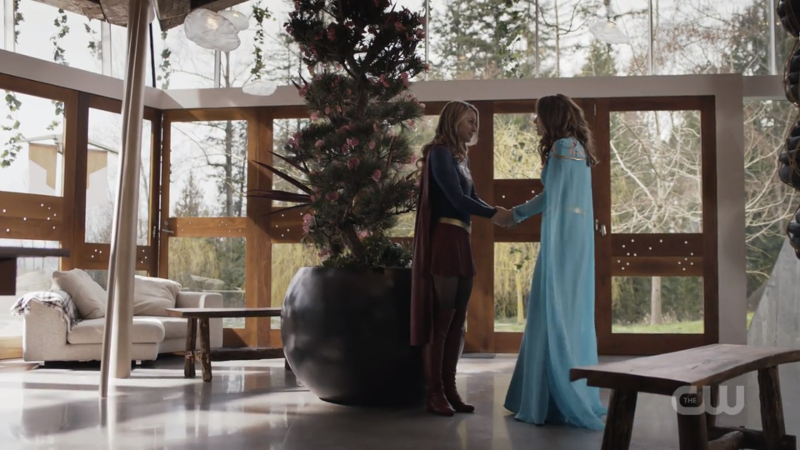 I think I saw this place listed on Airbnb once.

Allura talks about Fort Rozz and how she regrets not working harder to find a compromise with her sister. She asks Kara for forgiveness, and Kara gives it freely. It’s all very sweet.

Lena, needing a break from Sassafrass McReignface, goes to her office to wistfully look out the window and remember times when she was excited that Supergirl appeared on the balcony she built just for her. You see, Lena is having a hard time deciding on what she should do. Killing Reign would be their best shot at saving the world, but then Sam would be gone forever. 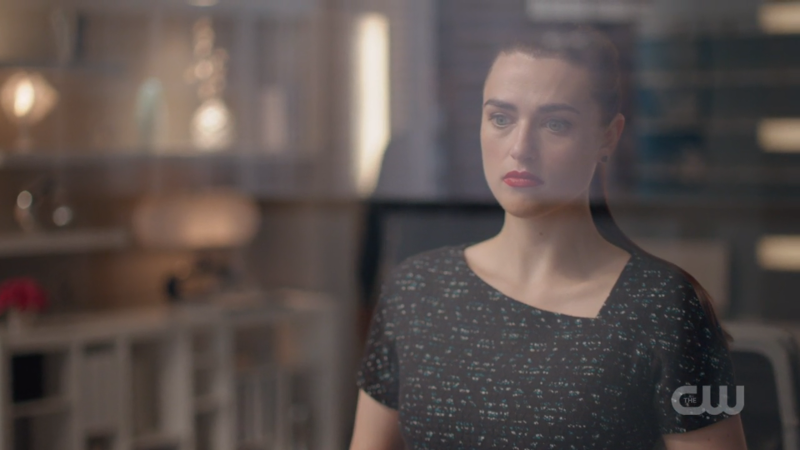 James implores her to think about what Sam would want, and though Lena doesn’t like the answer, she knows what she has to do if it comes down to it.

Kara, really enjoying embracing her Zor-El in Argo, goes before the council to ask for some of the black rock. The council thinks the Worldkillers are just boogeymen (well…boogeypeople) but she presses on, explaining that Earth is in danger, explaining why they need her help.

Alex’s plan that she’s putting into motion involves J’onn shapeshifting to look like her and going for a jog while the real Alex hides in a sniper’s nest on a rooftop. 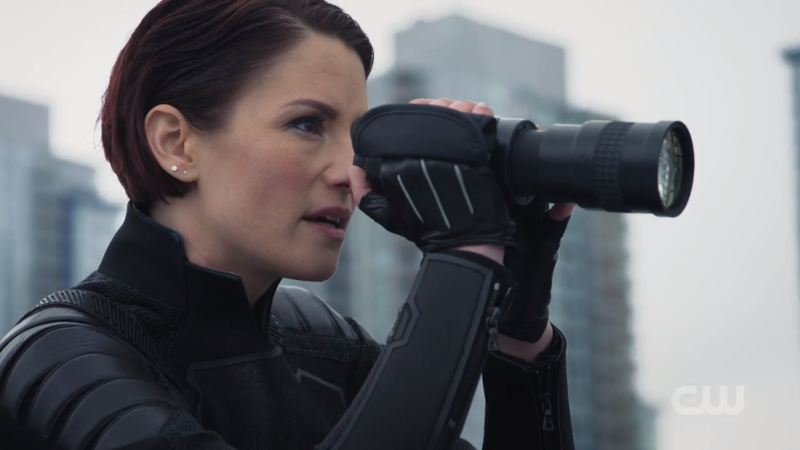 “Ooh, look at that hot lesbian in running ge–OH that’s me!”

But Alex’s attacker knows it’s her on the rooftop and goes for her, leaving J’onn to watch from the ground. As Kara’s voiceover talks about the wonders of Earth, of her human family, Alex parkours around, jumping from building to building like it’s her normal commute. But then things take a turn for the worse; it looks like Kara’s plea is being rejected, and Alex’s attacker has her Mufasa’d off a building. 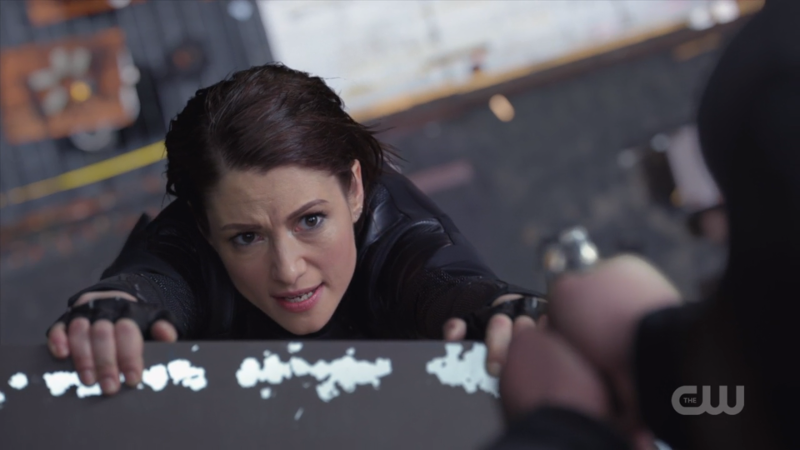 Alex realizes this guy looks familiar, and he says she arrested his twin brother from Fort Rozz, in denial that maybe his brother deserved to be arrested. She somehow gymnast flips up onto the building and overpowers him, just as her sister wins the vote to get a little black rock to take back to Earth.

Kara says goodbye to her mom, feeling pretty good about knowing it won’t be the last time.

At the DEO, Alex is feeling a little shook about the whole ordeal they just went through. She’s feeling torn between being a good agent and being a good caretaker for Ruby, and that’s making her wonder if when it comes down to being a mom herself someday, she’ll be able to reconcile her maternal instincts and whatever instincts make her jump off buildings in pursuit of a bad guy. She’s not sure if the part of her that isn’t afraid to put herself in danger and the part of her who wants to build a family can co-exist, but J’onn tells her that she is super smart and he knows she’ll make the right choice when it comes down to it, if a choice needs to be made at all. 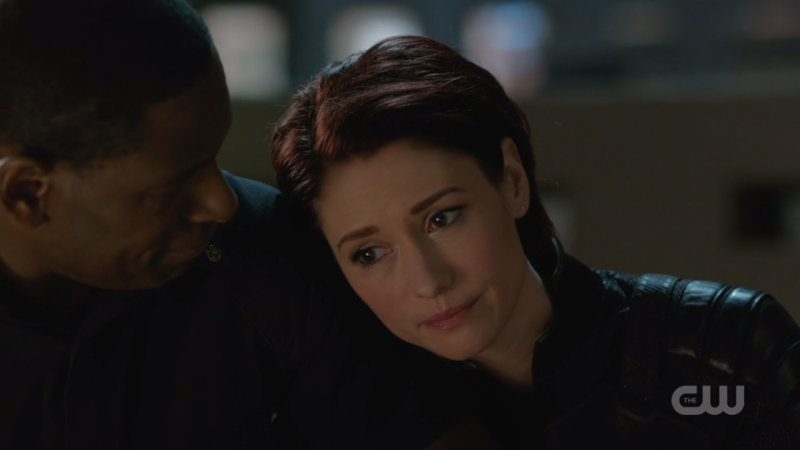 Down in the bunker, Reign is taunting Lena again, calling her strong but ruthless, saying they have a lot in common, saying Lena is darker than she realizes. One single tear falls down Lena’s face, hearing this horrible things come out of her best friend’s mouth, knowing what she has to do. 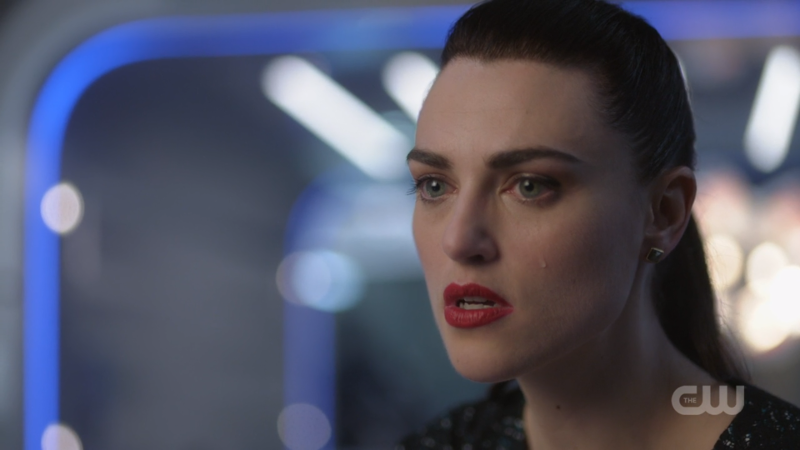 The tear that shattered our souls.

Reign taunts her more, almost begging her to end her, and Lena starts to up the Kryptonite, but Reign just rips the port out of her chest and breaks the barrier.

Supergirl shows up then, just in time to get a fistful of Reign.

Three more episodes! Do you think Alex and Kara will ever have a heart-to-heart or, hell, even a pizza night ever again?