First and foremost: Happy Birthday to my girlfriend, who is perfect, who I love to pieces, and who can finally pretend that they’re older than me (hahaha, I’m older than you baby!!!). Can’t wait to keep growing with you forever and ever. Ew, is love real?! Ugh. I guess so.

Okay, now. Happy Sunday little bumblebees! This week I hung up most of my art, cried only like three days out of the week, applied for two jobs, and discovered a bunch of new Hebrew music. It was a solid 6/10, and what more can I ask for? As Ari from Grease Bats (god I have a gay name) reminded us yesterday, “the entire world is in a collective depression”, so any moments of happiness are to be celebrated! So, while we celebrate my average week and the birth of my girlfriend, let’s also get into some collective joy!

+ I found this song this week and added it to my country music playlist and uh, you need to hear it if you haven’t.

+ Mikael Owunna’s photo project, “Limitless Africans” looks at LGBTQ+ African immigrants living their lives in over 10 countries. Such as this gorgeous photo entitled “Four Queer African Women in the Snow:” 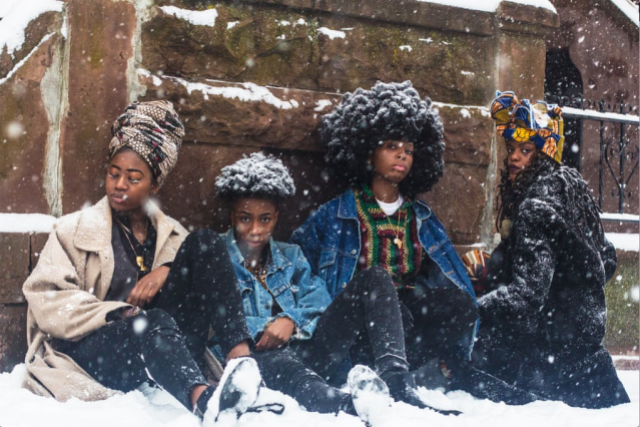 Historically, these are spaces that have not been welcoming to black people. They’ve been hostile, violent. There’s a shot of the Black Panthers in the snow by Hiroji Kubota where you see that same idea of black people asserting ourselves in a space of snow, asserting selfhood even as the world tries to tell us that we can’t. We’re going to take it for ourselves, just like we did on this street, in the face of the elements.

+ In the New York Times’ obituary series covering those whom the paper previously ignored, Susan Ware writes about Leonora O’Reilly, who fought for the rights of working class women.

+ Outfest, the LGBTQ+ film festival is virtual this year, and here are 10 films making buzz.

+ Shania pulled out the leopard print bodysuit to remind men that they don’t impress her much in Orville Peck’s new music video.

+ Quinn Whitney Wilson is more than King Princess’ girlfriend, she’s an artist in her own right, and she’s helping Black women to shine through her work.

+ Do people care about Shakespeare anymore? Anyway, he’s “definitely bisexual”, whatever that means for someone who died over a century ago. I’m really glad we called him Shakesqueer in high school. Feeling ahead of the curve.

+ Listen, don’t stan politicians. But it is cool to see that Alexandria Ocasio-Cortez has a towel rack that’s obnoxiously normal.

+ A visual history of the Suffrage movement.

+ If there’s any time to study the work of Octavia Butler it’s now; and the Huntington Library in San Marino, CA will fund a one-year fellowship for someone to do just that!

+ Some lesbian penguins have just adopted an egg. Good for them.

+ Brandi Carlile was on the Kelly Clarkson Show and baby when I tell you they sang down?!???? I love her so much.

There was so much good news to choose from this week, and I’m so happy I got to share it with you. I’m gonna celebrate another successful week with some of the sourdough biscuits that I recently made and give my cats some playtime because they are feeling… some type of way about me being around all the time but not playing with them every waking moment. I love you, I’m proud of you, I’m grateful for you (Especially after y’all helped keep the site alive for another year! Thank you!!!). Drink water, take naps, take walks, and remember that love is real. See you soon friends ❤️