Hello, luminous LED solar string lights! It’s the mooooooooost wonderful time of the year! It’s Star Wars: The Last Jedi box office season! Rejoice, ya’ll! Actually, I haven’t seen it, but I probably will. When I see all those other movies I’ve missed since I had a baby dinosaur. Which is when it comes out on Netflix or Hulu, honestly.

I digress. My particular family does, indeed, celebrate Christmas (in a purely commercial and good cheery way). Waffle and I exchanged gifts last night because we’re traveling today and Monday to visit family. Look at this sweet haul! These babies are going to look so good with the Hard Femme and Misandrist pins I gifted myself during the AS merch sale! Imma need a new denim jacket for my shiny new enamel pin collection! I got Waffle this custom artwork of our cat by a local artist who also used to be our Unitarian minister. 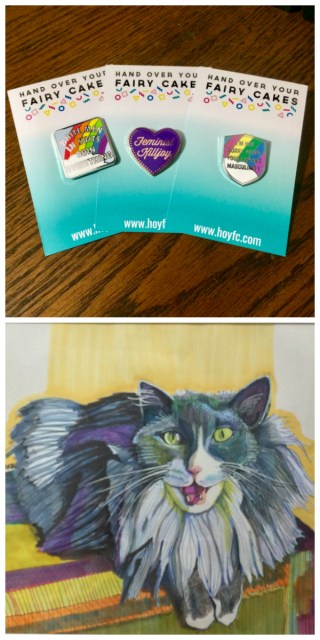 How are you celebrating Star Wars and/or Xmas and/or annual Chinese take-out night this Sunday Funday?

The EqualiTeam is here to save the day! Donate to the Kickstarter here

Or adult humans. Anyone who wants to color fun, comic-book-style pictures of socially conscious and badass superheroes! Beth and Laura Winters are the twin sister co-founders of Equalitoys, a company whose mission is to make toys that teach children empathy through inclusive and diverse representation. Equalitoys first release, Her Highness Build Robots, a princess coloring book that flips princess stereotypes on their head, was successfully crowdfunded in 2014 and continues to sell in bookstores everywhere and on Etsy. (It even did a stint in the Wildfang store!)

Their upcoming book, EqualiTeam Saves the Day, is a progressive coloring/comic book that features superheroes of all genders, backgrounds, and abilities. Each superhero uses their own superpower to make society more fair and inclusive. Yeah, I know! Here are some of the superheroes in the book! 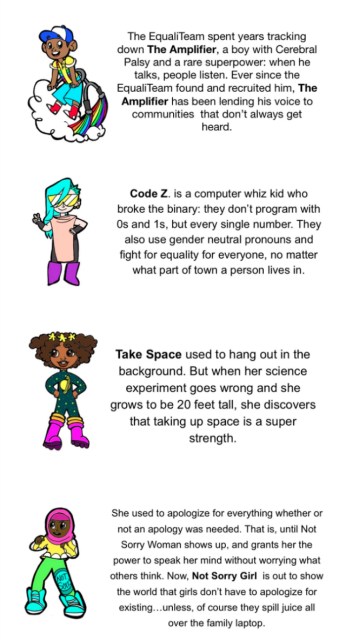 According to their Kickstarter page:

EqualiTeam Saves the Day! tells this story of 7 superheroes, with ethnicities and genders as diverse as their superpowers.The story of each superhero is told over six pages: two pages relate the origin story and four more show the superhero in action.

Check out the Kickstarter for sample pages from the book and more info about the project! A pledge of just $12 gets you a book and a sticker!

The Force is Queer With This One

Excited to talk a little Star Wars with my buddy @theellenshow today!!

I spent years as an actor hearing things like “Well, it’s not really a female story” or “We’d love to hire a female cinematographer, but there aren’t any.” So what I love about being part of any company or tribe right now is that we’re taking a different kind of consideration about how to go to the next level of respect, of storytelling, of supporting no gender prejudice in the workplace. To be part of a franchise that speaks to women, girls and diversity — and always has — feels particularly awesome. 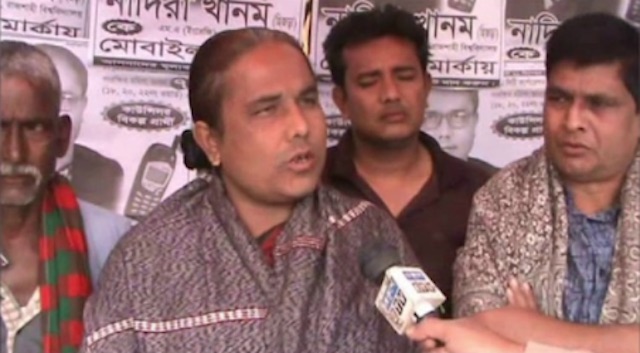 Nadira Begum, a Hijra is running for a councillor’s position in the Rangpur City Corporation’s election in Bangladesh.

Begum was exiled from her family because of her gender identity and faced discrimination for being a hijra in employment. Despite that, she earned a Masters degree and became a social worker. She opened an organization to advocate for trans rights in South Asia and wants to use her platform to progress trans rights in Bangladesh.

The election was Thursday and Begum has a good shot at winning, according to local press! She isn’t the first hijra to run, but the first to have a real chance to win!

Here, Queer, You Know the Drill

I Want a Fiona For Christmas

Whether you celebrate Christmas or not, you definitely want a Fiona for Christmas!