Hey hotties, it’s time for the Quarantine Edition of Straight People Watch. I know what you’re thinking: why. Well, like my Too Hot to Handle friends know, you’ve got to make the best out of a situation that’s not on, mate. Turning two negatives into a positive with a bit of a laugh, hey? Right proper fit, maths, innit? Anyway, I’m fine, obviously, but guess who still aren’t? 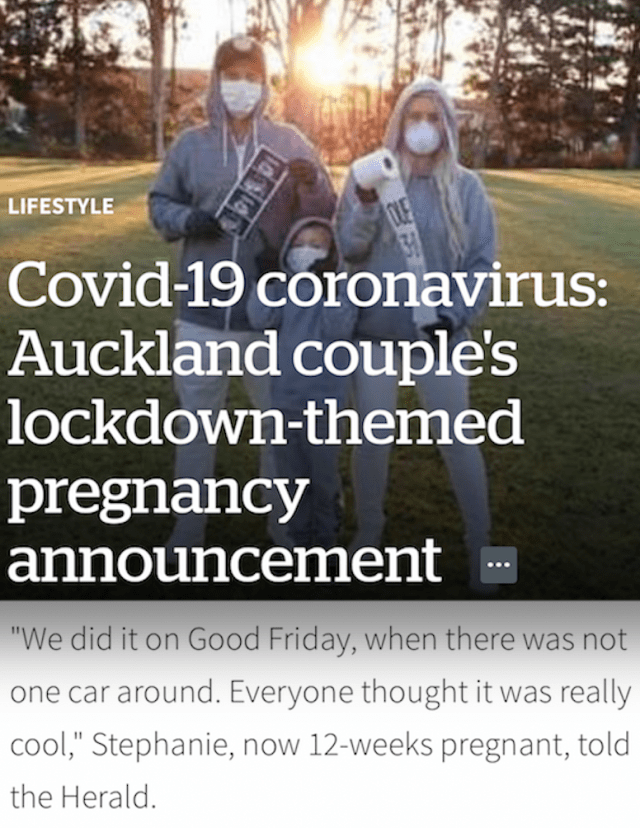 This couple threw on their best sweats and N-95s and wrote their baby’s due date on toilet paper. “Everyone thought it was really cool,” said Stephanie, a liar who can’t even come up with a good lie even though she has all the time in the world. 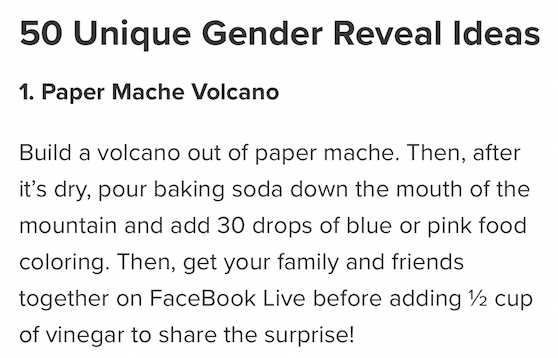 FIFTY? I can’t even give you 50 regular ideas right now (“There should be a website where you can order quarters!” – My only current idea.) and you’ve got 50 gender reveal-specific ideas ready to go, with detailed instructions? Go work for WHO, you nut! Find a cure! Also, a volcano made of papier mache? Make a volcano out of onion rings like an adult. 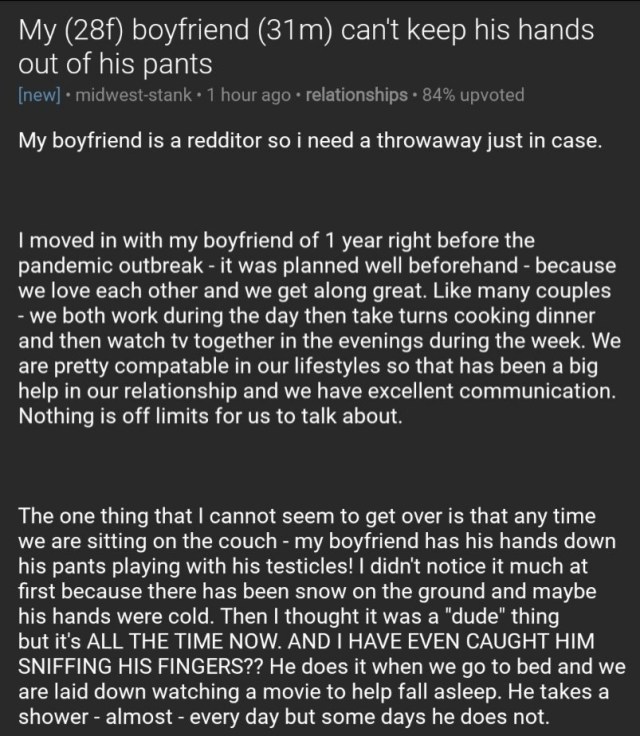 I know it’s not fair to go on the reddit relationship threads for content because it’s as easy as Britney Spears beating Usain Bolt’s 100-meter time, but sometimes a girl’s gotta do what a girl’s gotta do. Other times, a girl’s gotta ask for help about why her boyfriend can’t keep his hands out of his pants as if he’s missing the shame center in his brain. Hey, I’ll be straight up with you: evolution was a mistake. Literally a mistake, yes, but also conceptually: somebody goofed. We didn’t think this one all the way through. 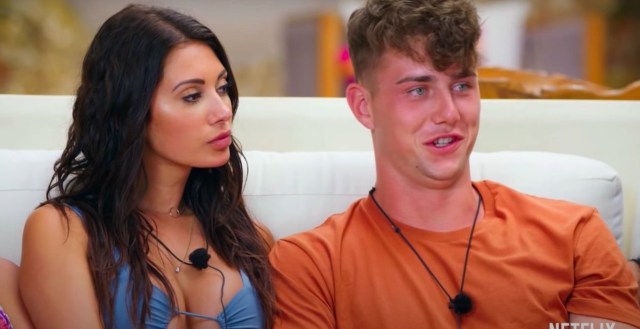 This is Francesca and Harry from Too Hot to Handle, a reality dating show on Netflix that came out last week, for those of you that didn’t watch it in its entirety in one sitting for some reason. Francesca is an Instagram model who called the 22-year-old Harry the hottest guy she’s ever seen. Her words! “Harry is the hottest guy I’ve ever seen,” Francesca said after being publicly shamed because of something Harry did that he then blamed on her, also publicly. And you know what? Fine. That’s between you and your god. But something’s gotta give. Harry’s main selling point about himself is that is he likes to have fun. Okay? So does my neighbor who paints her plants. Where’s her show? We’re at a point in time where the matrix mods have gone sicko mode on everything besides the male standard? No to this! Either sink us to the bottom of the ocean or level us up! 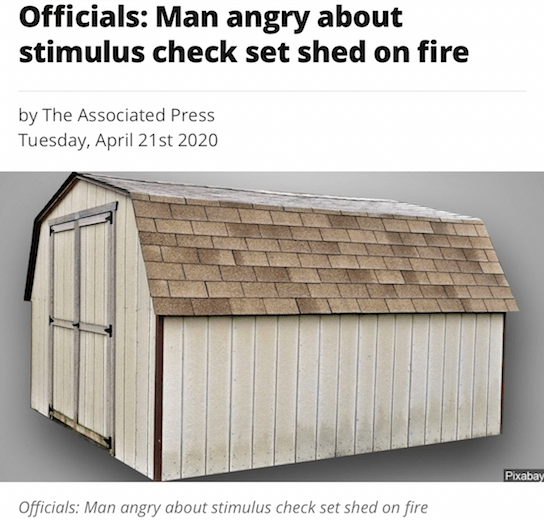 First of all, love this graphic. Zero notes! Second, what this headline fails to tell you is that this man set his mom’s shed on fire. I get the frustration, but you couldn’t damage your own property? Take after your forefathers and punch the drywall in your hallway, bud! 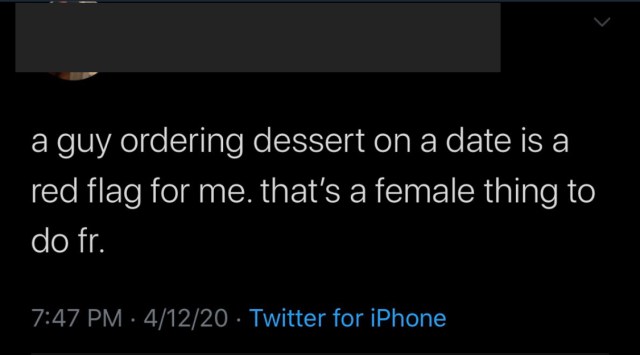 This exists within the quarantine time frame and is a stunning display of brain worms, so if it fits it sits, baby. Fellas, is it gay to experience a fleeting moment of pleasure? Ladies, would thou not like your man to live deliciously? Unfortunately, I am 100% certain that this also applies to fruit for her. So where does it end? Vegetables are good for you also… and caring for your body is pretty feminine. Dairy has estrogen and it’s like, women much?? Legumes give you energy to move and dancing is a form of movement so… yikes. 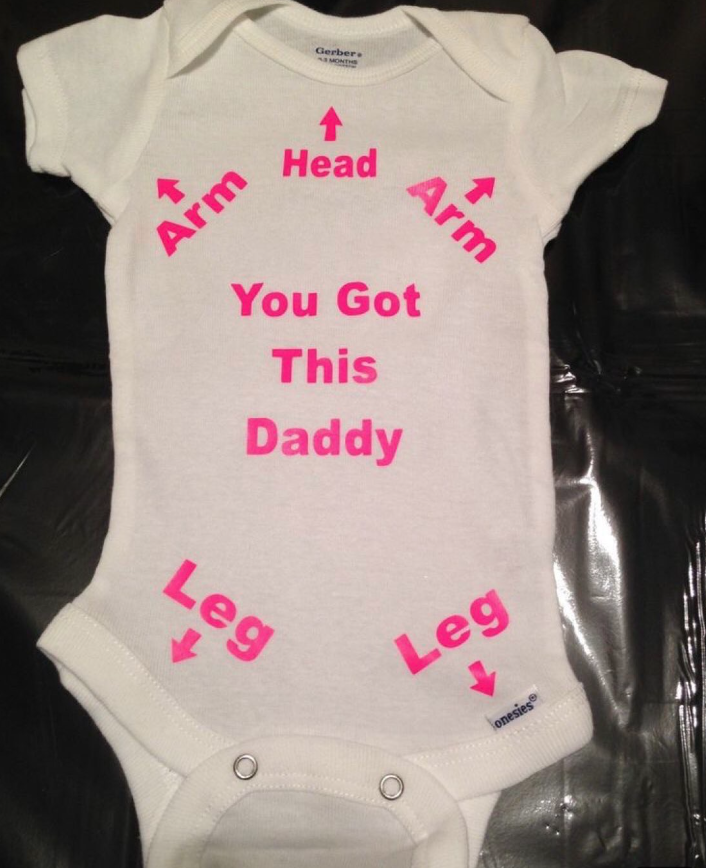 Daddy’s going to get you dressed, okay, sweetie? No, you don’t have to cry. You know him! Yes, that’s right, the one who has his hands down his pants in the scary room. He’s going to be around a lot more. Oh, honey, take a breath, you’re going to give yourself a headache. I’ve made a map, and now Daddy knows where your legs are, don’t you, Dave? See? There’s nothing to worry about. 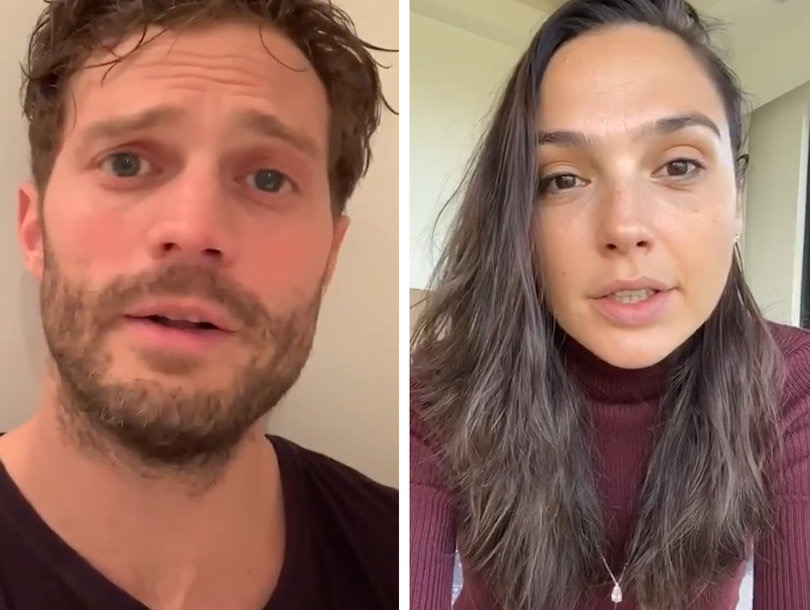 I bet this image instills a Pavlovian response in you at this point, doesn’t it? Gal Gadon’t! What a TIME. This cannot be stated enough about this video, but what a hellish viewing experience. Look at that man, sweat pooling, face strained, and who has since admitted he was on the toilet when he recorded his segment. Not even a patio? Gal Gadot calls you up and asks you to record something for the internet and your first thought is to bring your phone with you the next time you go to the bathroom? Oh, and no one tell me if there are not-straight people in this video. I’m not watching it again and the memory of it immediately got siphoned into the authorized personnel-only area of my brain. 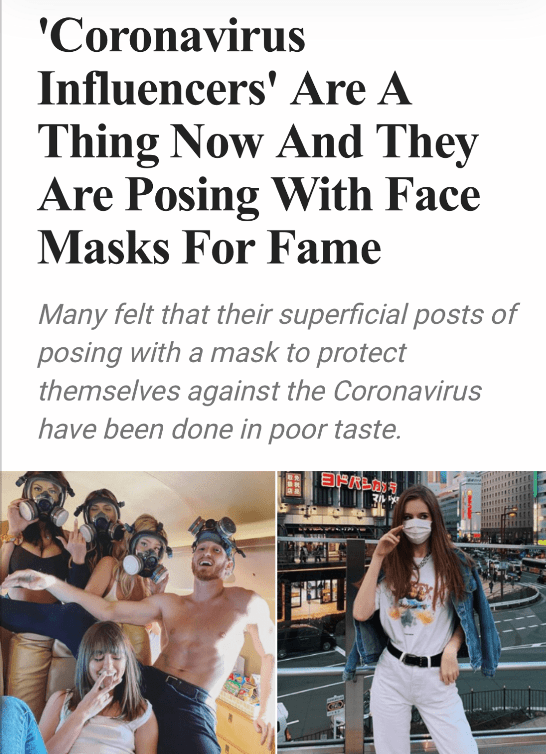 If I was an influencer I would simply collect $3000 for posting a single meme and not post a picture of me celebrating (?) with my PPE mask. Chalk that up to me having two ideas now. 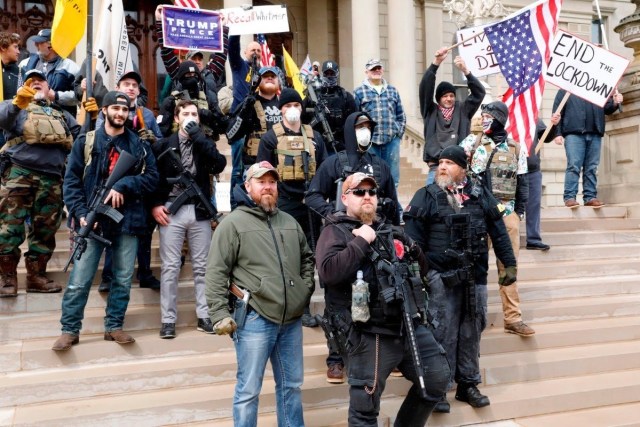 The plot of National Treasure but about finding the original coronavirus cell to shoot it. 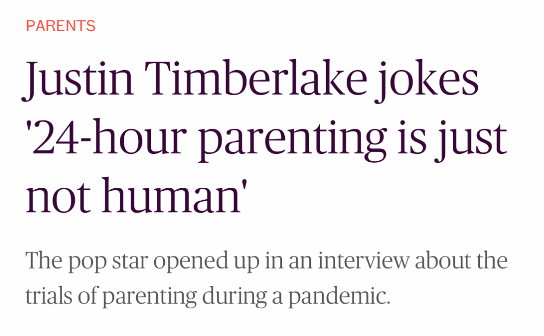 Aren’t straight people’s whole thing having children and knowing how you have to take care of them? Or is their whole thing just taking pictures together in restaurant booths and captioning it: “This one 😋”? Either way, I have some bad news for Justin Timberlake and Jessica Biel about the next 13 years of their five-year-old son’s life. I should tell their personal assistants to get a hold of their nanny so they can tell their housekeeper to explain to their personal chef that they’re going to need an extra special meal for our talk later. 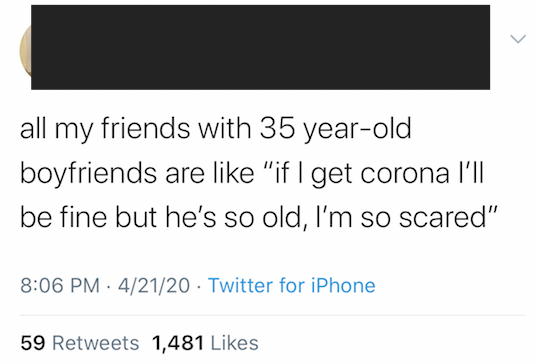 ALL your friends? [Julia Louis-Dreyfus as Selina Meyer laughing nervously and whispering “What the fuck?” to herself.] 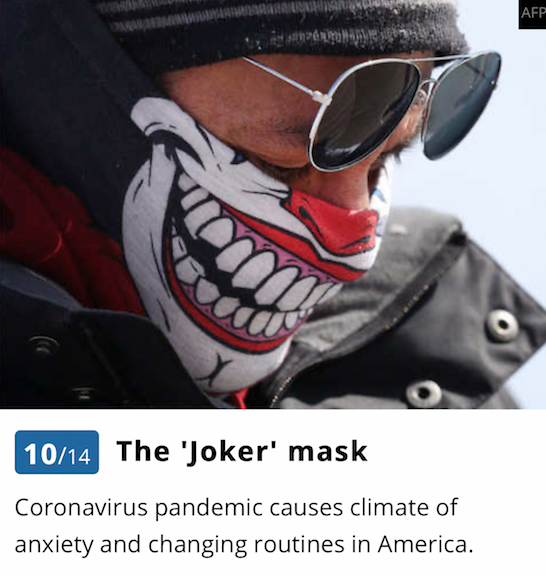 Why am I “so serious”? Well, it’s a pandemic and everyone’s freaking out and also you’re a white guy with joker paraphernalia?? An important reminder in these trying times is that regarding the small things you absolutely have control over — for example what you wear on your face that other people have to see — the option to calm down is available to everyone!

As mentioned, I know we’re having “a bit of a laugh” but what the hell, man. I now have a third idea. Instead of pretending to smear poop on a distressed child, what if you had them write a poem about their thoughts? I bet it will scare you, like the time a child I know wrote, “It cood always be that whay but you cood chang evreything” on a piece of paper for no reason! 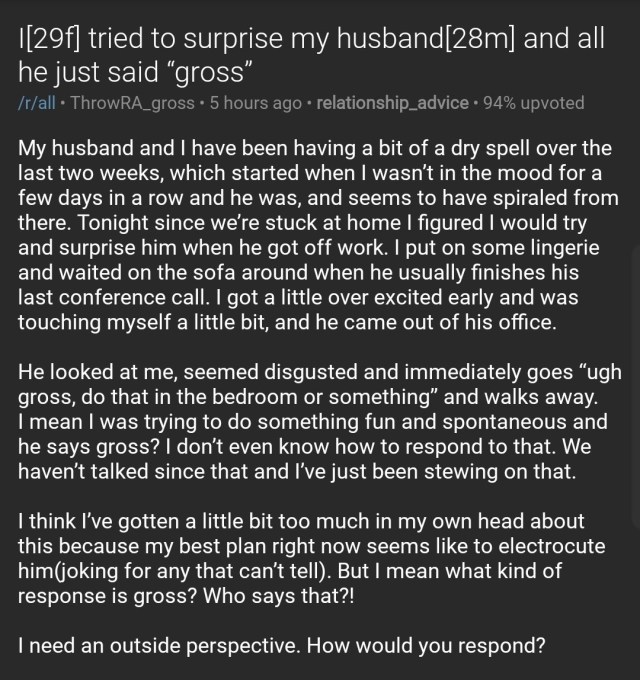 Ho, Tone! You hear ’bout this weather thing? Men are placin’ bets on it. Real money. Hard-earned cash about the weather outside. 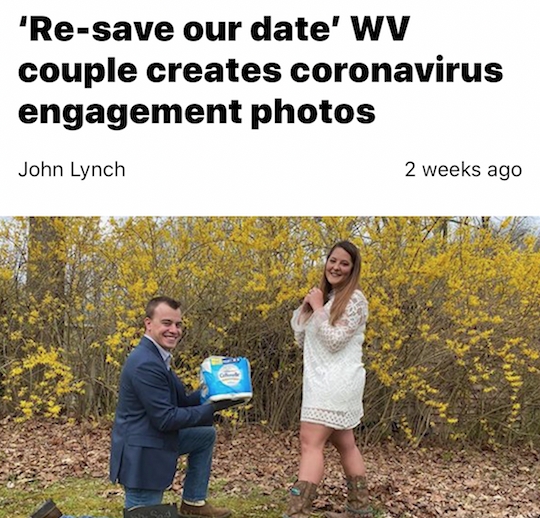 U.S. conservatives want the Supreme Court to overturn the legalization of gay marriage, but this is cool, too! 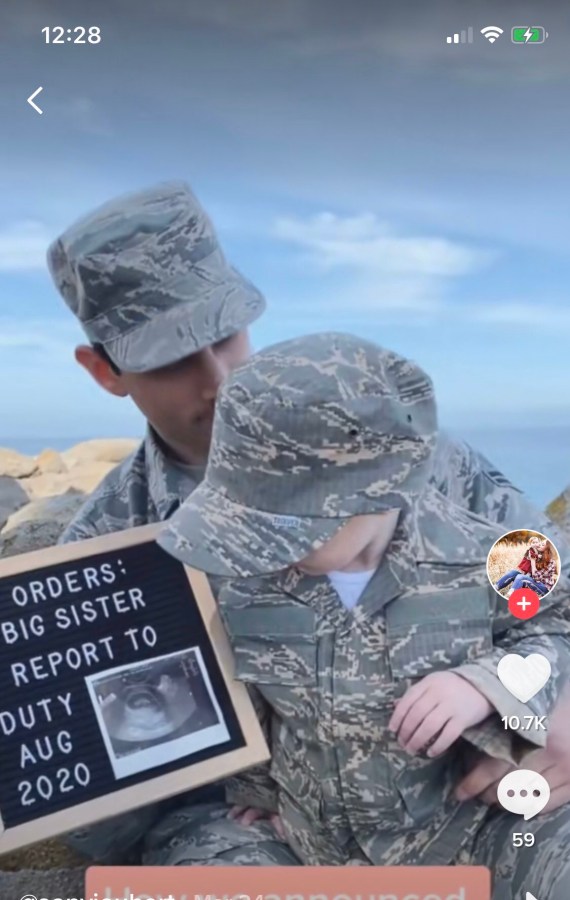 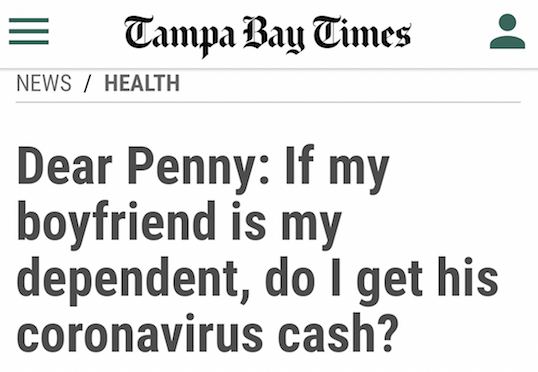 Hey, big spender! Your boyfriend’s your what now?

Anyone know what we’re protesting anymore? No? Great. When I say, “SIMON,” you say, “BIRCH!” SIMON!

Okay, hear me out. What if the things going into straight women’s vaginas that become trends are a series of clues meant to unlock a guide for help? Light, wasp nests, vapor rub, steam, glitter, and now ice… You go toward a LIGHT. Inside the bulb is a WASP NEST. You RUB it in order to release what looks like STEAM (swarm of wasps) that becomes a genie of sorts. You ask the genie for your first wish. Instead of your wish being granted, you are attacked by wasps. On your skin appears to be GLITTER (hundreds of wasp stings). You have to get away and into an ICE BATH. THE ANSWER IS IN THE BATH.