STRAIS ON GAYS:
One of the things I personally find consistently hilarious is straight people talking about gay stuff, and this article from Psychology Today called “Why are so many girls lesbian or bisexual?” is no exception. It is written by a (presumably) straight man who reminds me of Spock and includes memorable quotes like “…a growing number of girls self-identify as lesbian or bisexual. Not that there’s anything wrong with that, as Seinfeld might say,” and “Girls kiss other girls at parties because guys like it,” one teenage girl told me. “It makes the guys hoot and holler, so the girls do it again. They’re just doing it for attention. It’s not for real.” It’s actually not that bad overall and does its best to be objective instead of sensationalistic, but then again it also interviews a girl who says she’s bisexual now because an ex-boyfriend tried to make her shave her vadge, and asks if the increased visibility of queer women is because “guys are losers.” Also did I mention he looks like Spock. (@psychologytoday)

THIS IS FOR YOU SARAH PALMZ:
I think it says a lot that every gay news site we follow has covered this story. “Two elderly otters who were best friends and lived side-by-side for 15 years have both died of a heart attack within an hour of each other… zookeeper John Miller said the Asian otters, who were 19 and 16 years old, had been best friends for 15 years.” (@dailymail)

DINAH:
Have you been reading our series of Dinah Shore liveblogs? Maybe you should be, because we defo met Miley Cyrus while getting coffee yesterday, and Riese wore all black to the white party, and also BOOBS. Seriously. #desertstraddle2010 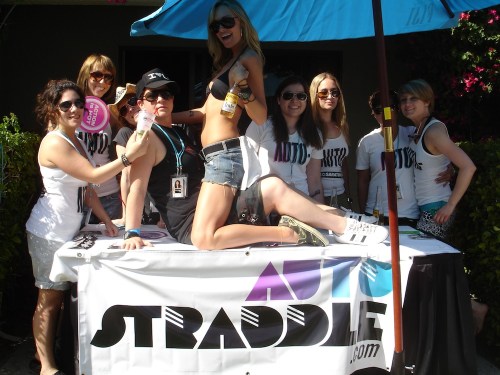 CORONATION STREET:
Um, speaking of sensationalistic, there’s going to be a lesbian storyline on UK soap Coronation Street! Don’t worry though the actress has a boyfriend in real life so it’s totally ok. “We’re both really happy. He’s been making the odd joke about me ­becoming a lesbian, but it’s what I expected and I can handle him.” (@dailystar)

PAQUIN:
Oh hey, I dunno if you heard, but Anna Paquin came out as bisexual! Also she crashed the True Colors Foundation site when she did. Other charities should follow this example and have hot female celebrities come out in order to gain support for their causes. LOOKIN’ AT YOU KRISTEN AND ELLEN (@kmtr)

CAFE:
Portland, OR is now home to Tuff Luck, a really great-sounding trans-inclusive cafe. “The cafe is inclusive of anyone who identifies as transgender, regardless of transition status, and raises funds for a variety of health care needs, including therapy, hormones, and surgery. Richardson’s friend Seamus Bogues created the shop with the goal of funding their top surgeries and told Just Out they eventually want to provide the same option to others.” If you’re anywhere in the area, definitely pay them a visit! Because apparently right now they can’t afford to pay their employees! (@theadvocate)

GAGA:
You thought you had heard every Bad Romance cover, didn’t you? Normally we wouldn’t bother you with another one, but this girl is very pretty.

And hey, do you feel like listening to the demos for “Just Dance” and “Monster?”

And also crashed the True Colors Foundation’s servers. Other charities should learn from their example and convince other hot female celebrities to come out to bring attention to important causes. LOOKIN’ AT YOU KRISTEN AND ELLEN (@kmtr)