Straddler On The Street: Rebecca, 37

Rebecca is a 37 year-old electrician, scuba diver, marathon runner, and artist hailing from Massachusetts but currently living with her partner in Philadelphia. She emailed me with a submission to this column because she wanted other members of the LGBTQ community who work in the trades, particularly those who may have a non-standard gender configuration, to see a face like theirs out in the world and on this site.

It was really fun to interview someone who has so much experience in a world that I personally know nothing about, so I think this interview will be really enjoyable for everyone, whether you work in the trades or not. But if you do work in the trades, know that this interview was conducted particularly with you in mind, and also be sure to reach out to Rebecca via Autostraddle for tips and connections with other awesome women in the profession. 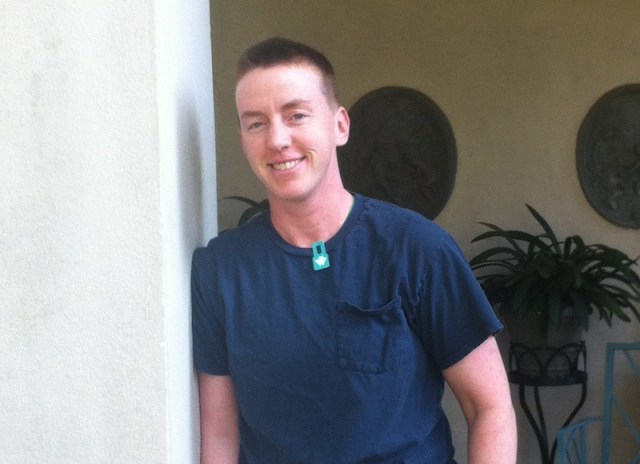 Tell me a little bit about your day to day life. What is your job like?

I am an electrician. I am an apprentice, which means I don’t yet have my license. I will be taking my licensure test this coming year. An apprenticeship basically consists of on the job training, as well as a classroom component. I currently do residential work. Here in Philadelphia, there are a lot of row-houses with old wiring, so we work on wires that are fifty to a hundred years old. We bring things up to snuff, replace things, and make sure stuff is safe. I have also done a bunch of commercial work: wiring luxury boxes in sports arenas, putting AC units on grocery store roofs, wiring hundreds of lights in parking garages, putting in charging stations for electric cars…

How did you end up where you are today?

I have always loved building and making things. I started doing stuff with Habitat for Humanity and helping friends and acquaintances build stuff. Around the same time, I was getting into building homebrew synthesizers and other odd electronic musical instruments. I built a little electromechanical machine that could add binary numbers. I realized I wanted a job in which my tasks were clearly defined, and in which each task had a distinct beginning, middle, and end. I also wanted a job in which I could concretely tell whether or not I was performing my job well. If electrical work is done on time, on budget, and according to code, it’s good. If not, it’s bad. I tend to be somewhat of a black and white thinker. Adding all those factors together… voila, I’m an electrician.

That is really cool! Do you have any tips for someone who might want to go into that line of work, or for people who want to go the route of trade jobs as opposed to desk jobs in general?

I do. Get experience. Volunteer with Habitat for Humanity. No experience is required, and they provide tools. There is another organization called Rebuilding Together. They have chapters all over the US [and it’s the] same situation: no experience or tools needed. If you already have experience, put a resume together and pound the pavement and submit it to all contractors in your area. Most will say no, but you don’t care about that. You only need one to say yes. Also, send me a personal message on Autostraddle. I will do all I can to help. My username is electrician.

That is so nice of you. Thank you! I think I know the answer to this, but are there many women in your field?

There are practically no women in my field. There was an initiative in the seventies to get women in the trades, but there are actually fewer women in electrical work now than there was then. My field is 98% male. 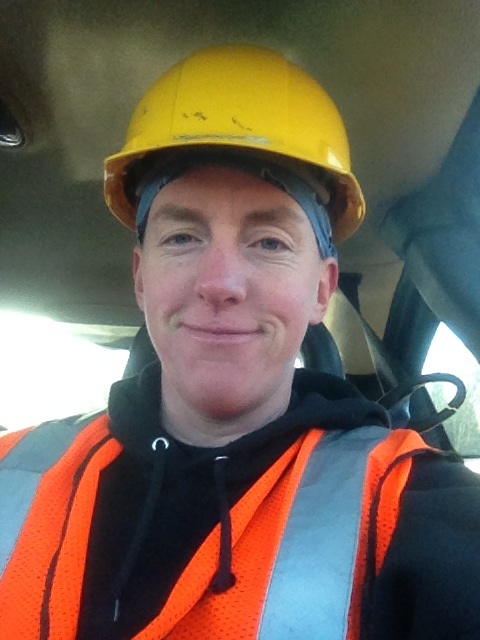 “I have always loved building and making things.”

Do you ever experience any stereotypical “backlash” type behavior?

Being a woman in the trades can be incredibly difficult. I tell people that it’s like learning two trades: the electrical trade, and the trade of how to navigate this kind of situation as a woman, and in my case, as an LGBT person and a gender nonconformist. The second trade is much more difficult to learn, because it is more complex and ambiguous, and most of your co-workers can’t help you learn it, because they don’t have any experience in it.

Having said all of that, I have found an online support group for women in the trades, and that has been great. Those women kick ass. Again, if any tradeswomen are reading this, send me a message, and I will help you get connected with other women. I attend night school for my trade, and a woman from my school just contacted me to be a part of a program aimed at helping people get into jobs that are considered nontraditional for their gender. That’s a good thing.

That is all really interesting, and all stuff I have very little personal experience with, so I’m fascinated. How old were you when you first got into volunteering with Habitat? Did you work any other types of jobs before coming to this trade?

I started with Habitat as a teenager. In a previous incarnation, I was an elementary school special education teacher.

Cool. In your submission for this column you also mentioned some other pretty impressive things you do – scuba diving and marathon running?! Can you talk a bit about those passions?

Growing up in Massachusetts, I was always in the ocean. In adulthood, I was talking with my best friend after just having finished reading Jacques Cousteau’s Silent World. I said to him, “I’ve always wanted to go scuba diving.” He said, “what’s stopping you?” I said, “me, I guess.” I signed up for a scuba class the next day.

I have been running my whole life. When I was eight years old, I was sitting in my third grade classroom, looking out the window. It was the day of the Boston Marathon, which is a huge deal in Massachusetts. I could viscerally feel the excitement of people around me. I formulated the idea to run a marathon while I was sitting there looking out the window. Years later, I did it.

Nice! And you are also an artist?

What sort of art do you do?

I do art that allows me to zone out while making a repetitive pattern. I find it relaxing to do activities that require focus, but no “figuring.” 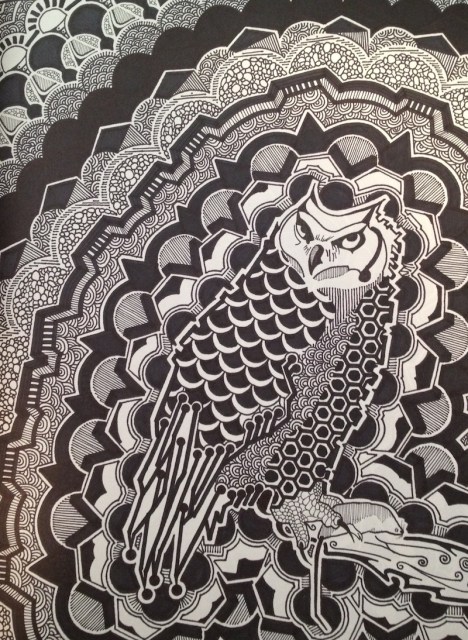 An example of Rebecca’s art

That makes sense. Can we talk about ACLU’s My Big, (Il)legal, Gay Wedding contest? I had never heard of it until you mentioned it in your email!

I had never heard of it until my better half told me we were entering! Her aunt suggested it to her, and we thought it was a great idea. The ACLU is holding a contest in support of marriage equality. Couples who live in states where gay marriage isn’t legal can enter. A vote is held, and the winners can travel across state lines to get hitched in a state where gay marriage is legal. My partner and I live in Pennsylvania, so if we win, we will be taking the RiverLink ferry – we are big supporters of public transportation – with family and friends to Camden, New Jersey. We will get married in Camden’s kickass aquarium, surrounded by neat marine life. Our wedding is diver-friendly. You can vote everyday, so I have been voting like a banshee. I know banshees scream, but I will say I am voting like one.

Hahaha, that is so awesome! Can readers vote for you guys?

They absolutely can. Here is the link: https://weddings.aclu.org/entry/178731. My partner and I both have pretty layered and complex feelings about gay marriage being thrust forward as our movement’s most prominent political issue, but we hope to adopt children, and marriage is an important demonstration of our commitment and stability.

That’s a really good point. I will tell Straddlers to vote for you! How long does the competition go on for?

Mid-January! And thanks! That’s much appreciated.

Of course. Speaking of the Straddler community, how did you discover Autostraddle?

I believe I fell down some Google rabbit hole. I’m thankful for that. You guys have a super interesting site.

Thank you! You mentioned that you’re from Massachusetts – what brought you to Philadelphia? And do you like it there?

I love Philadelphia, and I’m here because my partner is from here. Philadelphia is a cosmopolitan city that is priced like an industrial city. The town I lived in previously had one fully functional traffic light, so it’s exciting to have such a big change.

It’s great that you like your new home. I’m going to wrap up with a few final questions. Who is your hero, either professionally or in your personal life?

I really respect my partner. I think she’s very courageous. I also have a lot of respect for my mother. She passed away ten years ago, but she didn’t take any nonsense from people, and yet was extremely caring and empathetic. She had a huge effect on my life.

Do you have any plans for the future?

I hope to buy a house and start a family with my partner.

That sounds so nice. Finally, do you have anything else you want to share with the Autostraddle community?

I’d like to thank the makers of the site for doing what they have done.

Cheers to that! Thanks, Rebecca! 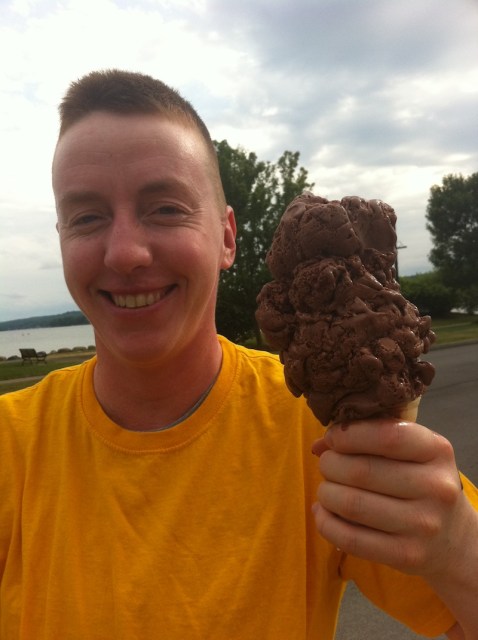 Another potential plan for the future: eat more ice cream cones like this one.

Hi crush monsters, this has been Straddler On The Street, a feature where I celebrate all of you incredible Autostraddle readers by hunting you down, demanding you chat with me, and then writing about you on the internet so we can all crush on you. Get excited, because butterflies in your stomach 24/7 is a fantastic way to live.