Standing on Ceremony: The Gay Marriage Plays is comprised of eight short plays by an amazing lineup of award-winning playwrights including Mo Gaffney, Moises Kaufman, Neil LaBute and Wendy MacLeoud. Originally planned as a series of benefits around Los Angeles, the event  spread across the U.S. to 40 different theaters in 19 states performed simultaneously last weekend as part of a cultural movement.

With marriage as a unifying thread, each 10-minute vignette explores a different facet of same-sex relationships, including Joe Keenan’s “This Marriage Is Saved,” in which an evangelist decides his tryst with a hustler has actually strengthened his relationship with his wife, Macleod’s “This Flight Tonight,” featuring a lesbian couple boarding a plane to their wedding in Iowa, and Doug Wright’s “On Facebook,” adapted from an actual Facebook wall thread chronicling one long fight among friends on the subject of gay marriage. My favorite short of the evening would probably be Paul Rudnick’s ”My Husband,” in which a liberal Jewish mother laments her gay son’s single status, going so far as to Photoshop a New York Times wedding announcement (the ultimate status symbol) to brag to her friends. 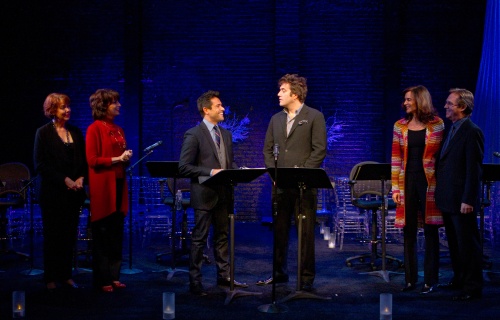 Cast of Standing on Ceremony: The Gay marriage Plays

The initial New York City cast features a mix of Broadway and TV vets including Mark Consuelos (aka Mr. Kelly Ripa), Craig Bierko, Polly Draper, Harriet Harris, Beth Leavel and Richard Thomas. Hopefully some openly gay actors & actresses will join the cast as they rotate every six to eight weeks (similar to Love, Loss and What I Wore).

If you happen to be in New York City for the holidays you should absolutely put this on your itinerary and after walk mere blocks to Marie’s Crisis to cement it as the gayest night of your life.

Check out standingonceremony.net for cast and ticket information.