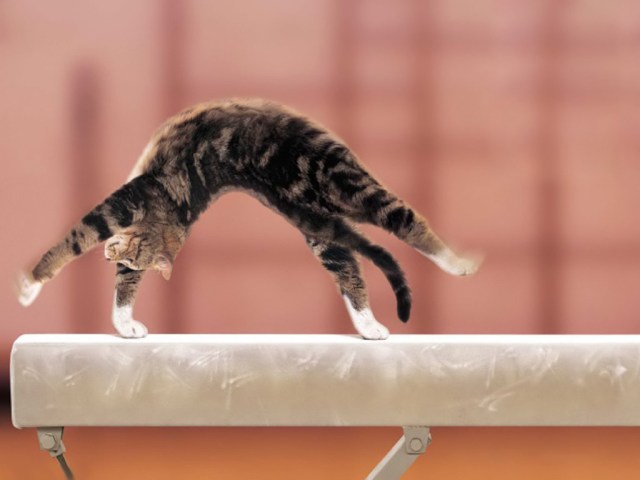 This is me
via vaysburd on livejournal

Yes, this is the Bible Belt.
Yes, there are queer-affirming congregations.

Yes, someone thought this shirt would be cute to wear to Alabama football games. 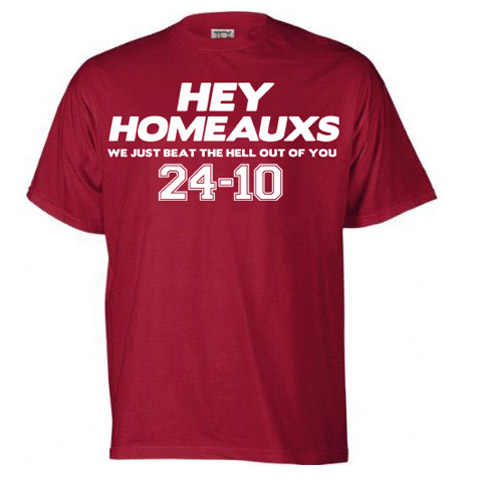 Yes, most people think this one is much cuter. 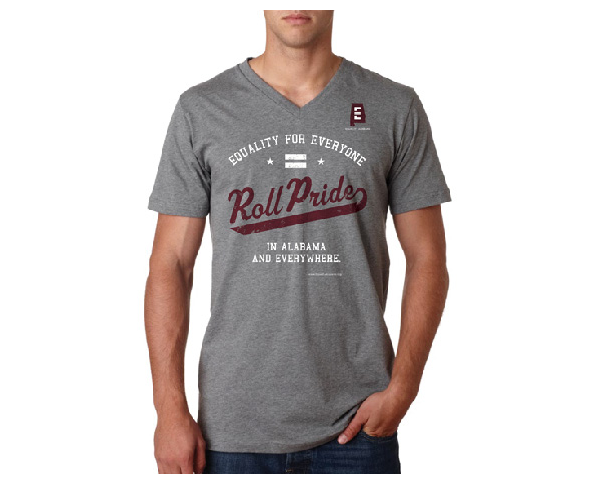 Yes, it’s still in our law books that sexual education teachers are required to emphasize that “homosexuality is not a lifestyle acceptable to the general public and that homosexual conduct is a criminal offense.”

Yes, it’s still the case that badass youth advocates and an openly gay legislator are willing to be highly visible to change that law.

This is the never-ending balance game. On the one hand, you want people to understand clearly that the overall culture is highly conservative, oppressive, that legal protections are beyond lacking etc… but on the other hand you’re obsessively proud of the collaborative, progressive, even radical LGBTQ+ community that exists here despite never really being invited in on the national conversations. It’s like, “Yes we have queer college groups, yes we have Safe Schools Coalitions, yes we have PFLAG chapters, yes we have LGBTQ film festivals and photography exhibits. Why do you think we don’t? I mean, I know why you don’t… but why don’t you?” You know? Balance.

One of the most transformative experiences I’ve had as a queer southerner was the opportunity to be one of a handful of coordinators for the Southeastern LGBTQ+ Student Conference.

The conference will reach its seventh consecutive year this February 21st-23rd at the University of Alabama in Tuscaloosa, Alabama and it is a perfect example of how to play with this balancing game in a way that empowers queer students from high schools and colleges across the deep south.

As a student organizer, I got emails all the time from prospective students and their parents who were surprised that our high schools, colleges, and universities in the deep south even had LGBTQ student groups so it was a distinct pleasure to melt their faces off with the news that we absolutely do have them and they all get together to do some intensely progressive stuff.

The conference is completely student-run and travels to different university hosts in the region each year. It’s also completely free for college and high school students to attend. Call it Southern hospitality. We called it annoyance at the fact that people would ask us unironically if we were going to go to Creating Change next door in Georgia when that cost hundreds of dollars and we were broke college kids. Seriously?

As you might imagine, there’s not a whole lot of proactive support from university administrations for such an endeavor. A lot of our Southern schools don’t have diversity/multicultural centers and thus the weight of LGBTQ organizing is placed fully on the students and a handful of their supportive faculty and staff. 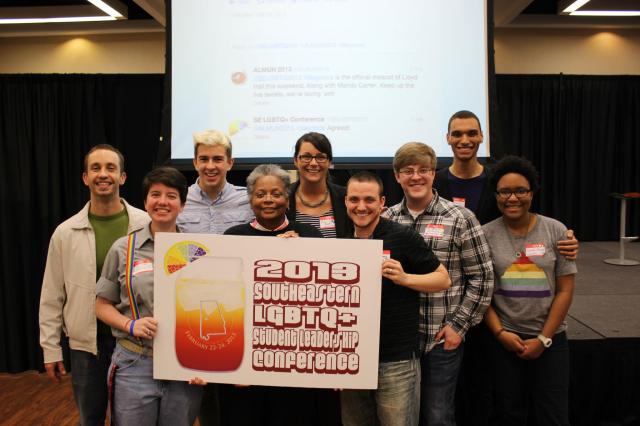 Student organizers with Mandy Carter of the National Black Justice Coalition and trans* activist Eli Strong -that’s me on the right!

This is a blessing and a curse. On one side, it meant complete and total agency. As students, we were free to set the agenda, approve workshops, invite who we wanted… to make it as queer and radical as we could and be virtually beholden to no one. On the other side it meant we were totally on our own to make it happen. A small group of around 10 of us, all students, handling everything: scheduling, logistics, coding the website, designing the programs, manning the Facebook page and Twitter account, putting credit cards on the line with fingers crossed that we’d be reimbursed – meanwhile trying not to fail classes/get harassed while doing the queer organizing work that we so desperately needed. Simultaneously, we had to prove to conservative administrations and apathetic queers alike that we needed it.

As a focus of the conference, we set out to be highly intentional about the kinds of conversations we wanted to spend our time having. We didn’t want people from queer national organizations to fly in, tell us how backwards the deep South is and what we’re doing wrong, then fly back to their comfortable “more progressive” hometowns. That sounds obvious as I write it, but you would be surprised (or maybe you wouldn’t) by how much people love telling the South the we suck at things. Queer Southerners included.

To understand, you have to acknowledge the self-defeatist mentalities that young southern queers often find themselves battling. We have a tendency toward internalized struggles not only based in reconciling our identities but also our geography. “I’ll never be truly happy here. I’ll never be truly safe here. I’ll never find community here. I have got to get out.” These are thoughts that it’s pretty safe to say the majority of queer southern and rural kids have had at some point. The narratives of fleeing the South for a Northern queer mecca and ideas that people from those cities are the ones who can lead the South of its backwards ways are pervasive.

Not helpful. Instead, we wanted to get queer youth in contact with the people and organizations proudly doing LGBTQ advocacy work down the street from them. Folks like The Southern Poverty Law Center, Southerners on New Ground, the National Black Justice Coalition, Alabama Safe Schools Coalition etc. 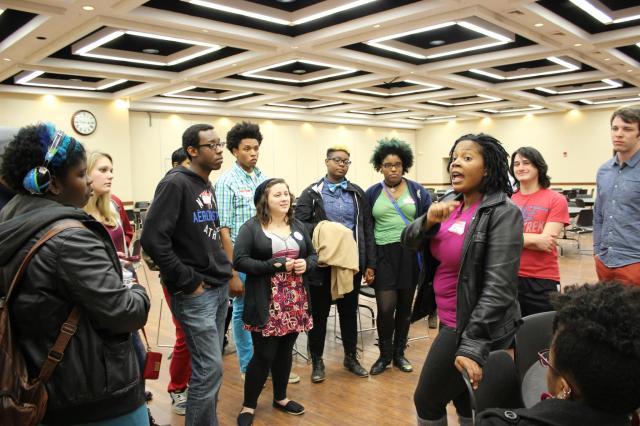 We wanted to break the habit of treating queer Southern organizing like it’s some new fresh thing we got from out of town. We didn’t want to act like we were reinventing the wheel. We wanted to stop pretending like we needed to have the most basic of conversations around LGBTQ identity (“This is a trans* person”) when we were totally down to handle complexity (“This is transmisogyny”).

We got chills and teary eyes in the first session when leaders from the Southern based LGBTQ advocacy organizations we invited told us simply that we didn’t have to leave the South. I can’t remember ever having heard anyone tell me that so plainly before.

Meanwhile the emails still come in asking, “Do y’all even have gay people down there?”

And we want to break the assumption that the South has to play catch up to the national movements for queer rights and set forth the idea that we could lead occasionally if we want to.

Why not? We’re kind of obsessed with being champions down here. 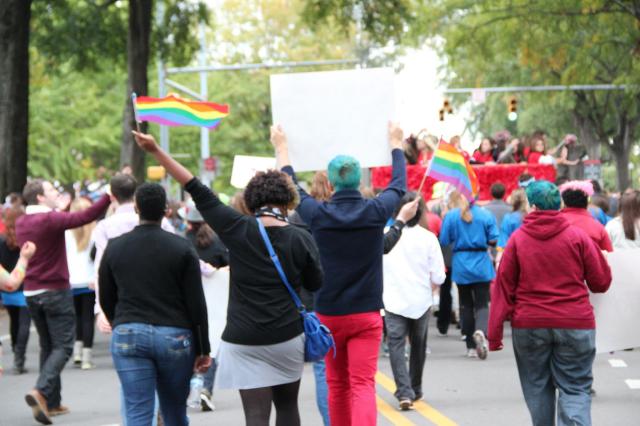