“We write to taste life twice, in the moment and in retrospect.” Those were the words of my first literary heroine, Anais Nin. Her expurgated diary Henry and June was given to me at the start of my medical transition. As I molted into the early stages of femininity, I was a co-conspirator in Nin’s love affairs. Moving between June and Henry Miller, I watched the way her performance for her lovers adapted to their presence. Her desire to know women exceeded her need to love men. Journeying beyond the combative nature of her relationship with Henry, the degree of intimacy she had with June was an oasis. I didn’t know this would be applicable to my life a few years into transition. One can never know in the moment if they have taken notice of what will be essential for the future self. But images embossed on my memories have beseeched me to reveal them. The heat of last summer and the familiarity of a woman made me susceptible to the vulnerabilities present in Nin’s diaries.

Winter bypassed spring and turned into summer, none being able to mark the moment of this shift. The extremities of this adjustment were told by our clothing without a word. Limbs that were once concealed by fleece were brazen in their display. This myriad of palpitating flesh embellished the grid of Manhattan. On a sidewalk seized by restless movements, she and I stepped closer into the space that had separated us. The freshness of the season had not yet worn off; the fragment of our mind that forgets what it’s like in the beginning. Keeping abreast of the passersby, the evidence of our intimacy was in the way we carried our hands. They were strategically placed so when they touched, it could be disguised as a perpetual accident. In honor of our silent dance, those near us were careful to walk around us instead of in-between. 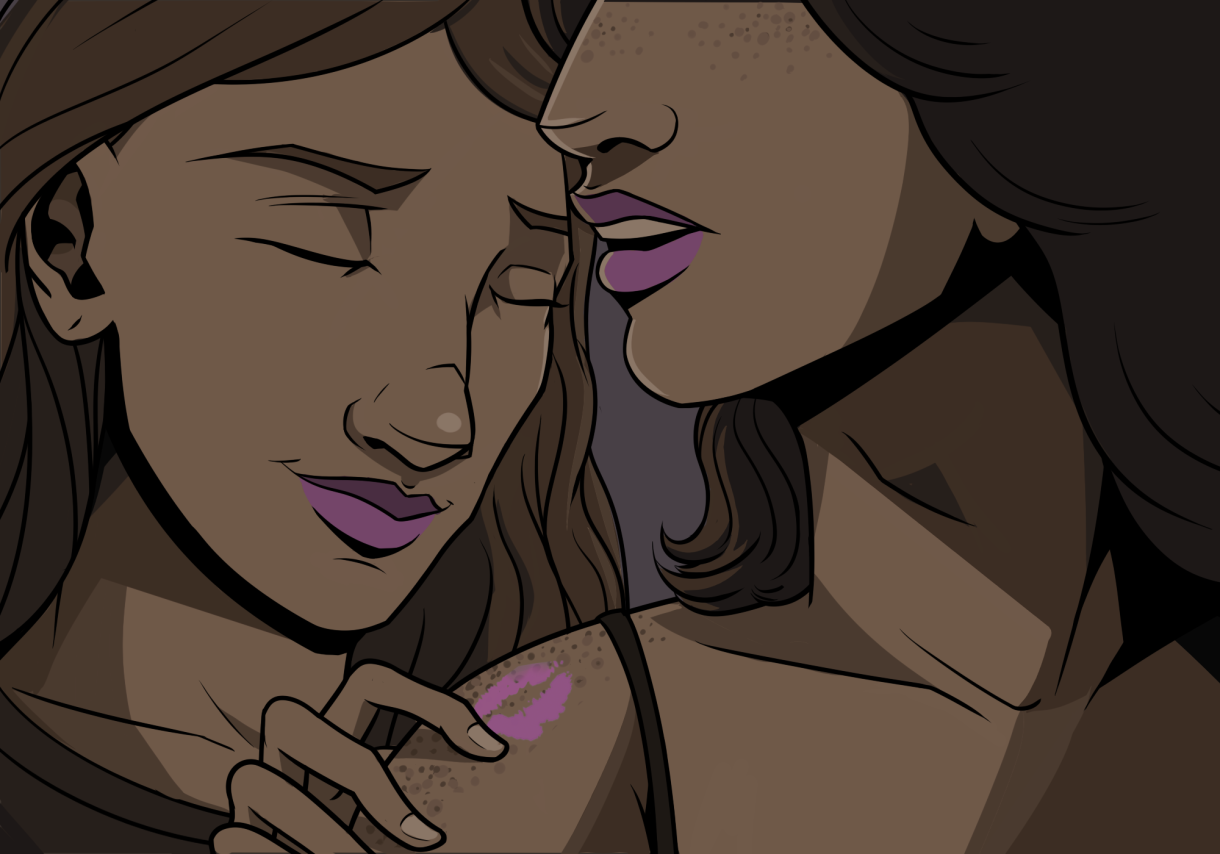 The genesis of this new kinship was overseen by the climate. Heat from the low hanging sun met a barrier of excess clothing on my skin. In response to puberty, I formed this barricade when the swimming pools and foliage of Tennessee had no place for me as a transgender adolescent. Shame, fear, and discomfort were all swaddled in a variety of weather inappropriate clothing. This reflex of being hidden persisted in adulthood. From beneath a canopy of fabric, I turned to look at my companion. With the ease of past summers spent in the sun’s line of vision, beads of sweat on her skin were condensed into droplets. All that was uncomplicated with her was a preoccupation within me.

“Let’s go in here,” were the sounds formed by her pink mouth; the same shade of pink could be traced back to my own lips. The shared tube of lipstick had acted as the liaison for our limited physical contact. She grabbed my hand and extracted me from the cyclical stream of bodies. Our close proximity remained as we entered a store spacious enough for us to separate. She exchanged my hand for a sale rack of clothing, reveling in the unrelenting need for reinvention at the start of a new season. Holding possible reincarnations of who I could be to my body, I scrunched my nose at the pink camisole she chose.

“Aren’t you warm in that? It’s 80 degrees outside,” she asked. If I knew the answer, I wasn’t going to let her know. Answering her question would be submitting an aspect of myself that I was still unfamiliar with. Still, I gave her enough to preserve our dance. “This is just what I like to wear, that’s all.”

She chose a rack full of clothing, circuiting around each category of the shop. Her decisive movements revealed that I wasn’t the only one withholding information. Watching her curate a new identity for me, I feigned an unawareness of being absorbed into her orbit. Standing still as I surveyed a pair of shoes, I felt her eyes on me. Determining the width of my shoulders and the span of my hips, she guessed my size in clothing. Following her, I eased into her lead.

“These are open, come on,” her voice trailed after her, as she made a clear line for the fitting rooms. Trying to understand the confidence in her maneuvers, I mimicked her walk. When I took my place standing next to her once more, one of the two open rooms had been taken. “Let’s just share this one,” she whispered from inside of the room, out of earshot of the fitting room attendant. Without bothering to simulate hesitation, I stepped forward into what would become a two-person incubator.

We were two women facing each other, both of us discerning that this was what the entire afternoon was centered around. The cisgender nonchalance she had to her body was met by my struggle to reconcile the exterior with the mind. She hung the clothing on the walls, securing our fortress from the migrating population of the outside. A Queendom of forms, the objects we carried in with us were our only audience.

The silence of our dance was over. Presentation of the unseen was required for us to continue.

She introduced a white silk georgette blouse by saying, “Try this one on, I think you’ll be able to breathe in it.” The silence of our dance was over. Presentation of the unseen was required for us to continue. Simple in its design, I examined the softness of the blouse in my hands. I wondered if this is was how she saw me. Nodding to accept her invitation, I turned around to change. I sheltered my newly developed body. Having fostered the growth of my breasts, I felt protective of them. They were too small and too far apart, but they were mine. Somewhere behind me her eyes were on me, waiting for signs of discomfort.

“Are you okay, Devan?” Her voice coated my eardrums. “I’m okay, this is where I want to be,” I thought, and I turned around. “Yes, I’m fine. What do you think?”

Stepping forward, she was now only inches away from me. The answer was in her gaze. Newly formed sunburns on her skin were magnified by the starkness of my own. The white silk georgette nearly camouflaged by my flesh but for the movements of my chest rising and falling. Responding on its own, my breathing picked up in its pace. Her eyes were on my shoulders, while mine remained on her movements. She traced the freckles on my shoulders with her fingers. This detail I inherited from my mother hadn’t been seen by the men of my past. Marking the occasion, she pressed her lips on the prime meridian of my ancestry. Pink lipstick now on my shoulder mirrored her sunburns.

She traced the freckles on my shoulders with her fingers. This detail I inherited from my mother hadn’t been seen by the men of my past. Marking the occasion, she pressed her lips on the prime meridian of my ancestry.

A knock on the door.

“Excuse me? Only one person allowed per dressing room. I have to ask one of you ladies to come out.”

No longer unnoticed, our dance came to a halt. Representative of a closeness that immobilized me, I removed the blouse and retreated into my own clothing. Attempting to steady my movements, she grabbed my wrist. The cloud of affinities that once enraptured us was dissipated by the presence just outside of our new home. Withdrawing my wrist back into my person, I opened the door.

“Sorry, there were no rooms,” was the automated explanation flung at the shop worker. Sounds of the voice of my companion reverberated far behind me, sounds that resembled my name. The clear instructions ricocheting in my mind couldn’t be penetrated by her voice.

“Two blocks up, two avenues over. That’s where the train is. It’s going to take us home.”

Merging with the populace of the sidewalk once more, anonymity was my asylum. The phenomenon of the city became a cavity without her. Her presence was the anchor that ensured me that life was really happening.

“One avenue left, and you’ll be on the train.”

Walking through the train’s closing doors, I turned on my heel. As we were hurtled through 100-year-old tunnels beneath the ground, I watched myself in the glass doors. Coercing myself to make eye contact, I considered what the train was moving me away from. I looked at my clothed shoulder, with it’s pink lipstick stain unknown to my fellow passengers. It was a secret beneath my clothes for me to keep.

Behind me in the reflection, a man was looking in my direction. Not at me, but the performance I’ve perfected. He lusted for the interpretation of womanhood that I’d created for the safety that accompanied being perceived as cisgender. I spoke his language in a skirt that was too short and a trafficable mane of long dark hair. These were my tools to paint a portrait for him to be distracted by, so I could be left to my own devices. While his eyes were on this image, I could step out of it and exist as myself. In the dressing room, that was where she found me. I wasn’t ready to be found.

June became July, which stretched into August. Apertures in the rhythm of the summer were growing. Firmly on the other side of the vernal equinox, the breach in time was tugging me away from the girl I was in the dressing room. Resolving to give purpose to the memory, I took my best friend to the ocean for her birthday. For me it was a reunion with the sea, after more than a decade of being unable to face one another. Having been given the gift of being seen, I freed my shoulders for the occasion.

As my best friend collected seashells behind me, I stepped into the waves. Watching my feet disappear into water, the tide picked up in response to my arrival. It’s capability for destruction was undetectable on this clear day in August. Embracing the current, I meditated on what we’d both seen in our 12 years apart. Heartache and hurricanes: necessary components that resulted in this homecoming. As I waved in response to my best friend’s call to come drink more wine, I thanked the afternoon in June for making way to this moment in time.

Nearly a year after that time, the effects a moment can have still occur. Typing this in baggy Levi’s, a tank top, and hair cropped to my ear, I can see her all over me. Colliding with her pillar of vitality as a body in transition stabilized me. Even as I scroll social media feeds to see her moving into an apartment with her new girlfriend, I click like. Because somewhere where the weather’s warm, and a tube of lipstick is shared, our dance continues with new participants.

Devan Diaz is a 23 year-old trans girl from Tennessee, living in New York. She does most of her reading on the train and spends the weekends trying to find the best southern comfort restaurant in the city. She judges Tinder dates by the confidence in their handshakes, and always manages to quote Virginia Woolf in every conversation.

Devan has written 2 articles for us.