I’ve been queer in New York City for 15 years, and sober for the last five of those years. However, long before I jumped in a U-Haul and planted my baby dyke roots in the Big Apple, I was born, raised, and spent a good portion of my life in Any City, USA. I stayed in my hometown for undergrad and came out during college. Like many Any City, USAs across the country, my hometown, at the time when I resided there, had little to offer in the queer culture department. Other than my college’s small LGBTQ student group, which had less than 10 regular participants, there was not a single LGBTQ-specific community center, sex shop, health center, coffee shop, or museum in the entire state. But, my city was home to the state’s only gay nightclub.

I remember the first time I frequented that nightclub. I was so nervous standing outside in line. However, once I got in, I felt like I was home, like I was free to be my true self for the very first time. No hiding. No shame. There were gay men openly grinding and making out. People were dancing and singing along to disco classics. A gorgeous butch go-go dancer who looked like a young K.D. Lang swiveled her hips on top of the bar wearing nothing but a tight pair of white men’s underwear and a tank top that had been cut off to a length that barley covered her nipples. An all-drag-queen punk rock group hailing from NYC stormed the club’s tiny stage and belted out a midnight performance of “Killing in the Name” by Rage Against the Machine. When they sang the song’s lyrics, “F*ck You, I Won’t Do What You Tell Me,” the audience pumped fists in the air and yelled back, “F*ck You, I Won’t Do What You Tell Me!” I was alive! That night, my queer identity was born in a bar.

I became a regular at the club and my drinking started to slowly increase. At that time, my drinking probably still could have been defined as binge drinking. But, when I binged… OH BOY, did I binge! And, after I moved to NYC, those weekend binges turned into drinking 5-7 nights a week. I came from meager beginnings, put myself through college and graduate school, held a good job, had great friends, and scored a decent NYC apartment. So, it took me some time to realize that drinking 5-7 nights a week was a problem. After all, I seemed to have it together and my friends, who were partying along with me, were more than functional — they were successful.

I was just doing what they were doing. And, we all were doing what (it seemed like) everyone else in NYC was doing. Even the women on Sex and the City (my generation’s Girls) were living the fabulous single life, going out somewhere amazing every night and guzzling Cosmos by the barrel. (By the way, Kristin Davis, aka Charlotte, is actually sober and proud.) If the straights were doing it, well then, we were not to be outdone because we were not normative; we were rebels!

The reality was that I had become another queer substance abuse statistic and there was nothing fabulous about my life. Or, at least everything that was fabulous about my life was being drowned in alcohol. I know what some of you are probably thinking: The bar scene is important to queer culture and it’s a shame that I had to abuse it, had to take it too far, right? And, I agree. The bar scene is very important to queer culture and, in my case, I had some biopsychosocial odds stacked against me that predisposed me to addiction.

via Celebrity Net Worth

But, one of those factors is being queer. According to the Pride Institute, “research suggests that alcohol abuse and dependence occurs at even higher rates [in the LGBT community] than in the mainstream population. Independent studies collectively support the estimate that alcohol abuse occurs in the LGBT community at rates up to three times that in the mainstream population. Said another way, alcohol abuse is estimated to occur in up to 45% of those in the LGBT community.” Although research has primarily focused on substance abuse among gay men, some studies reveal that lesbians and bisexual women also report higher rates of illicit drug use and heavy drinking than their heterosexual counterparts.

There are a number of factors that contribute to these higher rates, including, but not limited to, discrimination, stress, and lack of support networks. However, one factor that is often the rainbow elephant in the room is the LGBTQ community’s reliance on bars to socialize. Many LGBTQ individuals reside in areas, like my home state, where there are few opportunities to socialize with other members of the community except in bars. The Substance Abuse and Mental Health Services Administration states, “Legal prohibitions against LGBT behavior and discrimination have limited LGBT people’s social outlets to bars, private homes, or clubs where alcohol and drugs often play a prominent role.” Further, The Center for American Progress points out, “targeted marketing efforts by alcohol and tobacco companies exploit the connection many gay and transgender people have to bars and clubs as safe spaces for socializing and increase easy access to tobacco products and alcohol.”

NYC provided me with more opportunities to explore my queer identity outside of bars, but by the time I had moved here, my definition of what it meant to be queer was already skewed, rooted in the notion that being queer and being blasted and fabulous were inseparable. Besides, NYC also provided even MORE venues at which to get wasted. There were so many bars, nightclubs, and parties to attend. Every night was a wonderland that was not previously available to me back home. And, even if my friends and I were going to do something outside of a bar, like go to a gay beach, gay BBQ, or gay museum, those activities were usually preceded by a fair amount of “pre-gaming” and followed by another fair amount of “post-gaming,” because that’s what badass homos do.

A decade later, I found myself occupying a seat in AA. I made wonderful friends in the program, both gay and straight, and we all struggled at some point with redefining ourselves, with finding out who we truly are. Other than partying, what did we like, what were we good at, what defined us? One area that many LGBTQ individuals, including myself, struggled with was redefining what it meant to be queer. I always felt that my queerness was integral to how I define myself in general. But, if being queer was synonymous with getting drunk, then how would I ever be able to define myself as anything other than a drunk? Was I going to have to focus less on being queer? And, if that was the case, how could I do that in a world where I am constantly reminded that I am the “other?” Also, why was my queerness so hard to define when my regional, racial, national, and generational uniqueness seemed so evident and easier to incorporate in the healthier new me?

About one year into my sobriety, I went on a day trip to Fire Island, a stunningly beautiful gay beach community in New York that is also notorious for its all day and all night parties. All of my previous experiences of Fire Island involved getting obliterated (imagine that), so I was particularly bitter about this trip. How in the world could Fire Island be fun without booze? Yeah, the beach was spectacular, but then what? I was going to be the teetotaler while everyone else sipped on vodka by the pool and twirled around fabulously to Yonce and other divas.

Before the first wave of evening parties commenced, I excused myself to attend an AA meeting on the island. I was dragging my feet all the way there.

I entered the room and was surprised to see over 100 drop-dead gorgeous queers, tanned, in their summer gear, sipping iced-coffee, laughing, smiling, greeting each other with hugs, showing mad community love. WHAT? I thought there was going to be 3 washed-up, sad faced ex-delinquents there, and instead it was a gathering of fierceness and support that is usually only seen once a year during Pride. People were nice. They came up and introduced themselves, offered phone numbers, and shared their experience, strength, and hope. They even informed me that there was a recurring women’s seaside meeting on the beach that I should check out. All of a sudden, I felt as exhilarated and reborn as the first time I entered that gay bar in my hometown. 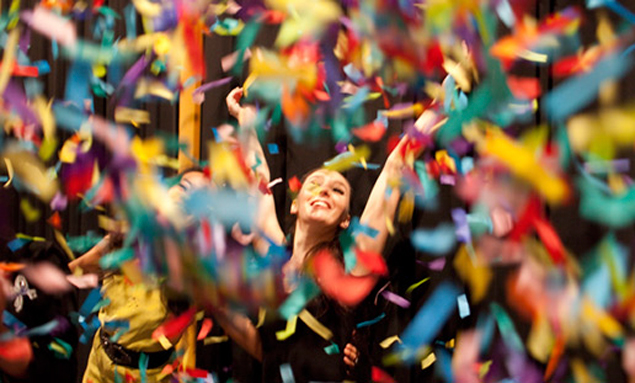 And, it got better. When I went to some of the parties later that evening, I saw some of the folks from the AA meeting shaking it on the dance floor like everyone else. We gave each other a nod, like we belonged to some secret gay sober association. (Because we did!) I was doing everything I had always done back home, in NYC, and now in Fire Island. I just didn’t have a glass of alcohol in my hand. (I had a virgin drink, and no one was the wiser.) I was present. I was kind. My words weren’t slurred. I stayed out later, harder, better, faster, stronger. My wallet was fat with money that I hadn’t spent on liquor. I even remembered every last minute of my night the next day. No blackouts. No regrets. Heck yeah, I was queer! And, I couldn’t wait to explore more of what that meant in every aspect of my life, from the office to the bedroom. Turns out that there is queer life beyond the bottle, and it’s fabulous!