I’m writing this article centering experiences of trans women of color, though other trans women may relate as well. I’m discussing our disposability, lack of desirability, and offering strategies to combat transmisogyny within our communities. I speak on behalf of myself, the experiences I’ve collected, and possible solutions. What’s stated here may not be true of every trans woman’s experience, and this isn’t an article that is asexual inclusive since I do not have experience or knowledge with those experiences.

As part of Trans Awareness Week, I think it’s incredibly important to talk about dating and having sex with trans women. We have a legacy of being queer that is often erased in narratives about trans womanhood, and this article aims to bring that up while also pushing this discussion further than just having sex with us.

I read this incredible article about having sex with trans women, and there’s also a pretty comprehensive zine called Fucking Trans Women that I would recommend though I have only skimmed it. After seeing both of these exhaustive resources on how to gender a trans woman’s body and how to have sex with her, I began thinking of how people already only value us for sex. It’s definitely important to have great affirming sex and less awkward or awful moments, and I want to push this conversation forward about loving trans women beyond sex. 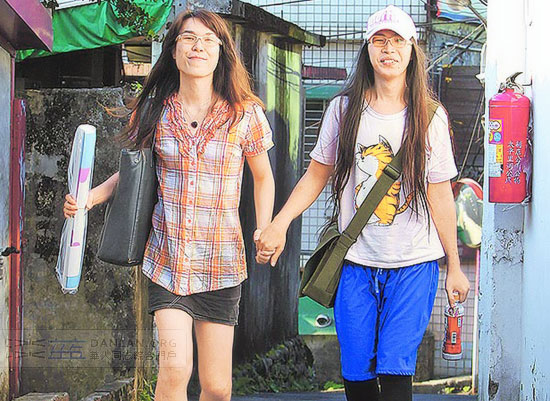 Abbygail Wu and her wife Wu Zhiyi
via whatsonxiamen.com

It’s within my experience, and the experience of at least a dozen trans women of color that I know, that we are the first to be disposed of in intimate relationships. By “disposed of,” I mean when life gets hectic for our partner(s), we are the ones who take the least priority and are the first “stressor” to be cut off. This is definitely an acceptable thing to do when someone is genuinely having their life fall apart and cannot maintain a relationship, so I am not advocating that every person stay in a relationship with a trans woman in every situation. I’m simply noting a theme that has been true for me and many trans women I’ve talked to about intimate relationships. I mean, what reason could you have for breaking up with us but maintaining a relationship (sexual, romantic, or a mixture of both) with other people? If your life is in shambles, wouldn’t it make sense to not be with anyone? Why are trans women the first to be cut off, and the only people to be cut off?

I feel like the answer of “transmisogyny” doesn’t explain enough. It’s because we are not valued as lovers, partners, or long-term relationships. The recent cultural trend of supporting trans women has made us highly prized assets; somehow you can prove your radicalness by being the example of someone who has worked through transmisogyny enough to view us as worthy of sex and love. But what kind of love views us as disposable? What kind of love makes us the casual fuck buddy while you pursue romantic interests with non-trans women? 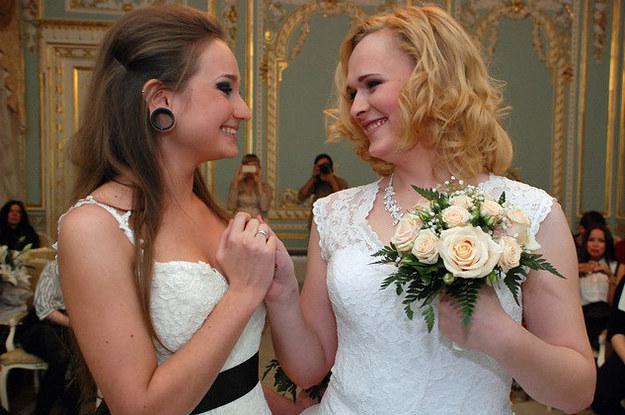 There are other patterns I noticed with trans women of color, and I’m gonna break these down a little bit, depending on how complex I want to get with them:

When we are in poly relationships, we get the least amount of time and/or emotional investment.

I’ve seen and experienced trans women being the least prioritized in poly relationships. Again, because we aren’t seen as valuable of long-term relationships or emotional investment, we are treated like sex experiments for Radical Points without being centered in another’s life. I’ve had a few conversations where TWOC admitted that they didn’t want to be in poly relationships, but didn’t think anyone would seriously commit to being monogamous with them. This has led to flexing our boundaries in order to have some semblance of love in our lives rather than nothing.

We are left or cheated on for lighter-skinned/white trans masculine people.

It is seriously a community trauma. Almost every queer trans woman I know has experienced being devalued for someone lighter-skinned or white, and/or masculine. This is probably one of the worst damages done to a TWOC because it has led to lots of feelings of self-loathing and questioning of self-worth. We are constantly resisting white supremacy. We are viewed as the opposite of cis white men, and to be left for a cis white man can lead to feelings of inadequacy and undesirability. Especially in situations where we are cheated on for white masculine folks, that deception and betrayal cuts deep into self-esteem because the message is “a white masculine person is worth the ending of our relationship.” 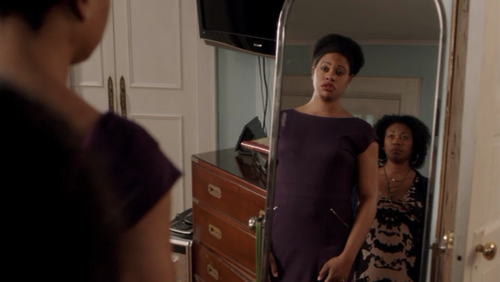 Sofia Burset and her wife, Crystal from Orange is the New Black

We are often the “first” for someone, regardless if they’re straight or queer.

Being The First for someone, regardless if they’re queer or straight, is one hell of a roller coaster. Since there’s so many narratives of trans women being loved in secrecy, it’s terrifying to be out in public with a First Timer since we are viewed as “giving them away.” I’ve tried to shrink myself, talk less, and become hypersensitive of my body instead of feeling present. As the article “Trans Women + Sex = Awesome” states, if you’re going to be with a trans woman for the first time, process that shit with your friends or therapist or family first before you place that responsibility onto us.

We bear the weight of stigma for our partners being attracted to us and being seen with us in public.

Related to my last point, we bear the stigma any person faces for dating us, especially straight cis men. Since cis men’s straightness is called into question for being with a trans woman, this can lead to a lot of issues with intimacy. We become the scapegoat, which can leave us susceptible to violence (Janet Mock writes about this here). We become the reason that cis men’s sexuality is invalidated. It takes a lot for cis men to own up to their desires towards us, especially when it involves sex *and* romance beyond bedroom dates. The best way for anyone to approach their attraction to trans women is being fiercely unapologetic about it to your social circles, and exposing us to as little of the lash back as possible.

Additionally, lesbians also face stigma for dating us because we aren’t seen as “real women.” This transmisogyny has been persistent in many lesbian communities because a strong basis for their identity is not having sex with a penis, which makes the assumption that all trans women have penises or want to use their penis in sex. Many lesbian or queer women’s spaces have made space for trans men but not for trans women. I encourage cis lesbians to talk to each other about why this is, to undo their transmisogyny of viewing penises as revolting, and de-centering the idea that being a lesbian requires an aversion to penis or that lesbians cannot be in relationships with women who have penises.

We don’t get asked out on dates in queer spaces, and there’s a lack of sexual tension that many other queers share with each other.

This notion that trans women are only straight stems from outdated medical guidelines around gender identity that created the idea that to be a “legitimate” woman meant being heterosexual. Trans women have a legacy of being queer, including Sylvia Rivera and her partner Julia Murray. Fallon Fox, an MMA fighter, is also in a relationship with a woman and I, too, am centered on dating, loving, and desiring femmes and women. Queer/lesbian trans women exist, and we’re worthy of the risk of being asked out just like every other queer.

We are viewed as supporting patriarchy by dating straight cis men.

Honestly, in my experience, I have found cis straight men who have handled and viewed me as a woman more readily and steadfast than cis queers. It is incredibly validating having cis straight men view you as a woman worthy of desire and love. I have had transformative sex with cis men who have unapologetically embraced my body in ways that countless queers have not. There’s been this hesitancy with queers who are afraid of my body, or who have not worked through their transmisogyny that makes them disgusted by my body. I know the focus of this article is on love, and when sex is tainted by disgust, that prevents folks from Making Love to us. By saying we are supporting patriarchy by being in relationships with cis men, you are denying us healthy, supportive, and loving relationships. And you can go fuck yourself for that. 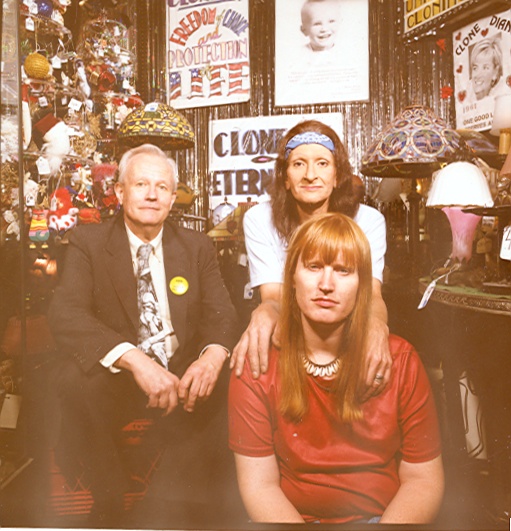 …and also, I dream of finding a femme or woman who has dated trans women before. As much as cis straight men are accessible to me now, my sexuality and desires are still centered on finding love and partnership with a femme or woman.

My goal in talking about these patterns was to make other aware of what trans women have to deal with when dating. I mean, there are simple things like Don’t Lie To Your Partner(s) that every person should know, but can always use some repeating because it’s still a problem. If you see yourself doing any of these things (putting the burden of being a First Timer on your trans woman partner, desiring whiteness and/or masculinity over your trans woman partner, giving trans women the least amount of your resources/time/intimacy, etc), seriously ask yourself why you’re being such an asshole and talk about it with people who aren’t your trans woman partner.

I know we’re magical and powerful and amazing and magnificent and can handle tons of shit, but maybe try to make our lives easier and enjoyable and relaxing instead? That’d be nice.

Luna has written 3 articles for us.