For someone who didn’t actually win the Iowa caucus, Rick Santorum has been riding a wave of good feelings and good media coverage for the past few days. (Then again, since he only lost by 8 votes, “not winning the Iowa caucus” is almost an arbitrary distinction in this case.) There’s much speculation as to whether Santorum can translate his Iowa success to the New Hampshire primary, and what it means that he did so well in spite of many peoples’ expectations. Santorum was seen as possibly-too-conservative outlier to Romney’s more appealing moderation — but maybe we were all wrong!

Or maybe we weren’t. Santorum’s attempts at winning over New Hampshire seem to have gotten a little rocky, as he left the stage at a town hall meeting to emphatic booing after a “contentious debate” over gay marriage. New Hampshire is in the middle of a tumultous battle over whether they’ll repeal their law legalizing marriage equality, and Santorum’s not the first GOP candidate to run into trouble there over his views on gay marriage.  But in front of a crowd of “mostly young people,” Santorum found himself outnumbered by the people in the audience who were ready to call him out on his anti-gay views — as well as how they conflict with his party’s stated goals of a smaller, less invasive government and protecting states’ rights. 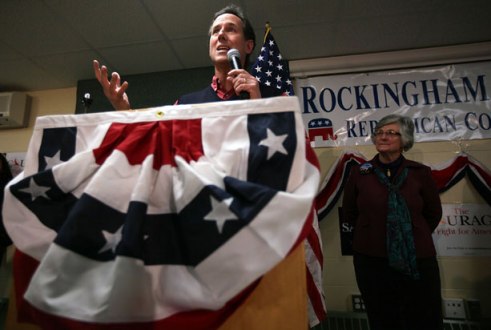 As more students shouted, Santorum tried to end the discussion that had devolved into students shouting over each other in an attempt to drown out Santorum’s words. While he was briefly able to steer the conversation away from the controversial issue, the candidate found himself in the same dangerous territory when a crowd member asked if he would adhere to the conservative pillar of state’s rights in cases when a state legalizes gay marriage and medical marijuana. “I think there are some things that are essential elements of society to which a society rests that we have to have a consensus on,” Santorum said. “That’s why I believe on things as essential as ‘what is life’ and what life is protected under the Constitution should be a federal charge, not a state by state.”

The audience also questioned how exactly Santorum had come to form such socially conservative beliefs if he didn’t seem to understand some of the basic issues behind them — for example, his apparent unfamiliarity with medical marijuana laws. Santorum’s response was that, obviously, he formed opinions from “his own life experiences” and that he “went to college too.” Which is pretty much all we’re looking for in a Presidential candidate, no? College education and vague drug references?

For the most part, Santorum’s negative reception was “an anomaly of sorts,” and many of the audiences he’s spoken in front of in New Hampshire have seemed to react positively. College students aside, New Hampshire has a healthy conservative base, to whom Santorum’s “personal narrative of coming from a Roman Catholic, working- class family with immigrant grandparents” may have plenty of appeal — especially since New Hampshire is close enough to Massachusetts, where Romney was formerly governor, to know exactly how moderate he is. But whether it’s the unending infamy of the word “santorum” or the fact that Santorum the person actually thought it was a good idea to allude to a slippery slope towards legal polygamy when asked to defend his “one man one woman” stance, it seems safe to say that the college-age crowd, or anyone who’s not completely entrenched in socially conservative ideology, is never going to help carry Santorum to victory. Which happens to be pretty much the exact crowd that did carry Obama to victory. It’s not really possible at this point to make real predictions about the general election or whether Santorum will make it there; it’s not even really possible to predict how he’ll do in the primary on January 10, as Iowa shows us. But the signs are there that plenty of Santorum’s target audience is ready to question his rhetoric, and maybe more importantly, that he doesn’t have much to say for himself when they do so. “Life experience” teaches us that doesn’t bode well for anyone, and especially not a Presidential candidate — if Santorum wants to remain as heralded as he is right now, he might want to figure out how to answer for himself soon.