So, the Iowa Caucus! Did you want to hear about anything else yesterday? I hope not! Because really all there was to think about in the whole wide world was who the Iowa caucus would indicate might possibly maybe be the Republican presidential nominee. 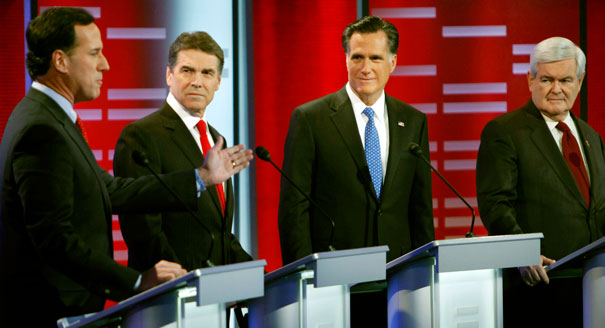 How does this work, exactly? That is actually a very good question! NPR has a helpful breakdown here if you’re not sure what’s going on. Basically, instead of each individual Republican party member showing up to a ballot box and choosing which candidate they would like to support via voting in a primary election, voters in Iowa meet in 1774 different local political meeting that start at a predetermined time and whose membership is determined by your residence. Each candidate has a “surrogate” give a speech in support of them in front of the entire caucus, and then the members of the caucus vote. The totals for that caucus, or precinct, are then added up and called in to the state party. If a visual explanation is more helpful, GOOD has a nice one here.

It’s a very unique voting process that prizes communal decisionmaking, but at the same time presents problems that traditional voting doesn’t — for instance, needing to find someone to cover at work or childcare for most of the day instead of just a half hour. The thing is that while the nation looks to Iowa as a possible predictor of who the Republican nomination will go to, we’re also aware as a nation of specific ways in which Iowa actually differs from the rest of America. Candidates have been campaigning specifically for Iowa votes for weeks now, with strategy and tactics designed to win over the population of that state in particular. After the caucus, they may shift gears and  do something (relatively) totally different for the rest of America.

As far as elections go, it’s actually pretty low stakes in real terms, although you wouldn’t know it from the amount of media coverage. Although it’s considered a “straw poll” and a possible predictor of who the GOP nomination will go to, it’s far from a foregone conclusion; for instance, in 2008 the Iowa winner was Mike Huckabee.

The Iowa caucus for the 2012 election was marked by being sort of baffling and also not allowing onlookers to pick a clear leader out of the pack of candidates, and in that way it was not unlike the entire race for nomination so far. Ron Paul, Rick Santorum and Mitt Romney were tied for much of the night, with a very slim margin between them. For others in the race, there was less confusion about their level of success; Rick Perry announced that he’ll go back to Texas to “determine whether there is a path forward,” and while Michele Bachmann announced that she’ll stay in the race, but the fact of the matter is that she’s in the position of being asked whether she even wants to stay in the race. While Gingrich had done well in polls up until now, a series of attack ads  set him back in a serious way, and he trailed Ron Paul by almost ten percent, whereas the top three candidates had at most a 3-4% margin.

While most prediction models, including Nate Silver’s, didn’t expect Santorum to carry the day, he did better than most expected (except, paradoxically, maybe Nate Silver himself, sort of). Romney and Santorum remained in an almost literal neck-and-neck tie right up until the end of the tallying, with the margin often only as wide as a few individual votes. In the end, Santorum surprised a lot of people with a victory, even if it was by 0.1%. (Although Silver notes that this doesn’t seem to have increased his odds of winning the nomination by much.)

Santorum may or may not be any closer to the Republican presidential nomination, but we are definitely closer to a future in which Santorum is discussed on every major and minor media outlet, and has the “Iowa caucus winner” title attached to his name as long as he stays in the race. Which, by the way, still has plenty of time to go. Here’s to the next 7(ish) months.

UPDATE: In the cold light of day, reports say that Romney may actually have carried Iowa, by literally eight votes.