As most of you have probably heard, Michele Bachmann won a poll in Iowa to determine their favorite Republican presidential candidates, with Ron Paul coming in second. It was apparently a big enough deal to cause Tim Pawlenty, at one point considered one of the frontrunners, to drop out of the race. But is a straw poll driven by money really the best way to determine who will win the Iowa caucus? Is it really time to start panicking about a potential President Bachmann (words I can barely stand to type)?

There are a lot of reasons to take the Ames Straw Poll with a pinch of salt. For one, it’s hardly an accurate cross-section of Iowa voters, considering how much of it is determined by money. It costs $30 just to get into the event, and in the past, candidates have often bought the tickets for their most ardent supporters and bussed them in from around the state. (It used to be that they’d bus them in from around the country, but the event now requires attendees to present proof of Iowa residency.) In addition, it is also frequently dependent upon the candidates’ willingness to cough up money. A minimum of $15,000 (to go toward the Iowa Republican Party) is required for candidates to set up a table outside the event, with the closer and flashier spaces going for higher amounts. This year, the highest bid was $31,000 from Ron Paul, whose booth featured everything from a classic rock band to a “Ben Bernanke lookalike in a dunk tank.” 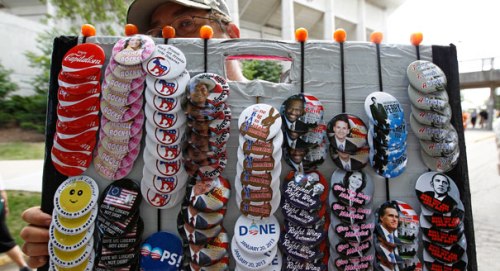 In addition, two rather big names in the Republican presidential race sat out the Iowa straw poll: Mitt Romney, who decided to focus his resources elsewhere, and Rick Perry, who announced his candidacy too late to be included on the ballot. Jon Huntsman and Newt Gingrich also didn’t participate (Gingrich sent a representative, but did not bid for a booth).

According to FiveThirtyEight, in all the years the Ames Straw Poll has been around, the winner of the Iowa caucus — a historically loaded victory — has always placed first or second in the poll. However, this is only the sixth time the poll has been held; it’s too small of a sample size to determine if the pattern will continue.

And of course, winning Iowa does not mean winning the nomination. Yes, Obama got Iowa in ’08 — but the Republicans picked Mike Huckabee, who went on to lose the nomination to John McCain, who garnered an unimpressive fourth place in Iowa and did not win a single county. Iowa Republicans tend to favor strong social conservatives, who often go on to fail in the more liberal East Coast states. After all, the first stop after the Iowa caucus is libertarian New Hampshire, where McCain triumphed over both Romney and Huckabee in ’08. At the time, McCain was still seen as one of the more “moderate” Republicans, a reputation not tarnished until his choice of Palin as running-mate.

So just because Iowa Republicans like Bachmann, that does not mean that the rest of the country will — and gay rights could be the issue that dooms her in more liberal states, where even Republicans are uncomfortable with her degree of homophobia. Despite her recent attempts to dodge the issue or make herself sound more moderate, the evidence is clear that Bachmann is holding fast to her anti-gay beliefs while the country is rapidly moving in the opposite direction. For example, she has recently claimed that she would reinstate DADT.

Moreover, there is the fact that gay activists aren’t buying her backtracking. She’s been a favorite target of pro-gay-rights crusaders, who’ve done everything from glitterbombing Michele to dressing up as “barbarians” and glitterbombing her husband Marcus’s clinic. Most recently, Bachmann’s speech at the Iowa state fair was interrupted by Gabe Aderhold, a 17-year-old gay Minnesotan who shouted that she treated him “like a second-class citizen” and “shame on you!” It’s no wonder, really; as Bachmann’s profile rises, more and more comes out about her connections to ex-gay movements and anti-gay extremist and “heavy metal minister” Bradlee Dean, not to mention the fact that Marcus Bachmann is probably in the “pray away the gay” business himself. Her backtracking may appease her true-blue supporters, but it’s unlikely to convince anyone else. 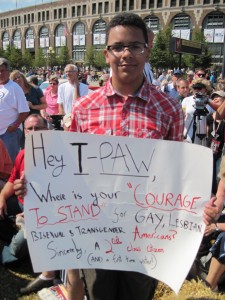 via The Des Moines Register

It’s important to also keep in mind Iowa’s recent gay rights history; in 2009, the Iowa Supreme Court overturned the state ban on same-sex marriage, surprising many who expected such a middle-of-the-road Midwestern state to trail the coasts on marriage equality. A year later, Iowa was the only state with same-sex marriage that had less than 50% of the public in favor, and in 2010, Iowa voters responded by ousting three of the judges who voted for marriage equality. Choosing someone like Bachmann could just be a continuation of this backlash, and may not play out in other states where the anti-gay movement is less inflamed.

Ron Paul’s second-place finish is perhaps more surprising, though it’s easy to explain away: Paul was the highest bidder for the Ames straw poll, guaranteeing him a strong finish. In addition, Paul’s followers are among the most fiercely loyal of any candidate’s (although still relatively small in number), and thus would be overrepresented in a contest that’s largely about enthusiasm (to pay the money and to drive long distances to show up). And as with Bachmann, he’s buoyed by the fact that two of the likely frontrunners, Romney and Perry, were not included in the straw poll. That said, a lot of liberals see his finish as encouraging. Personally, though, I’ve read a little too much about Ron Paul to still see him as the “least of all evils.” There is, for starters, his rather disturbing record on race. Back in 1992, his newsletter The Ron Paul Political Report published some extremely racist statements around the time of the Los Angeles race riots. Some choice excerpts courtesy of Daily Kos’s series on Ron Paul:

“Our country is being destroyed by a group of actual and potential terrorists — and they can be identified by the color of their skin.. This conclusion may not be entirely fair, but it is, for many, unavoidable…Opinion polls consistently show that only about 5% of blacks have sensible political opinions, i.e. support the free market, individual liberty, and the end of welfare and affirmative action…Given the inefficiencies of what D.C. laughingly calls the ‘criminal justice system,’ I think we can safely assume that 95% of black males in that city are semi-criminal or entirely criminal. If similar in-depth studies were conducted in other major cities, who doubts that similar results would be produced? We are constantly told that it is evil to be afraid of black men, but it is hardly irrational.”

You can read more at the link above; The Houston Chronicle also dug up more troubling statements during Paul’s 1996 Congressional campaign. The New Republic also did a feature on Paul’s racism during the 2008 election (which, unfortunately, isn’t available in its full version online) plus a recent follow-up (which, thankfully, is). Needless to say, these kinds of statements have earned Ron Paul many fans among white supremacists, from whom he hasn’t done quite enough to distance himself. He even accepted a donation from Don Black, head of notorious white supremacist forum Stormfront.org. 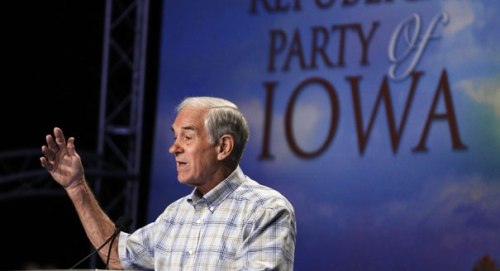 There is also the fact that Ron Paul is so extreme in terms of his distrust of any sort of federal government funding for anything (he wants to abolish the Department of Education, for example) and that, despite his reputation as a “rational libertarian,” he doesn’t believe in evolution and is very anti-choice, which make it hard for me to understand why liberals should be optimistic about his chances, especially in a race that also includes Fred Karger.

A kernel of hope, perhaps, can be taken in terms of the fact that Ron Paul is still billed as an alternative to socially-conservative Republicans like Bachmann, whatever his record suggests to the contrary. So his strong showing could perhaps indicate that even in Iowa, some Republicans would prefer somebody who is less virulently homophobic (Ron Paul’s position that gay marriage should be decided by the states isn’t great but better than most Republicans, and he voted to oust DADT, though he also opposes ENDA). Hopefully, Paul’s second-place win in the Ames poll will garner his less-savory views more news coverage.

However you want to interpret the Ames straw poll results, it’s up to you. But personally, I’m not panicking yet. On top of everything else, the Iowa caucus is still five months away. A lot can happen in five months. And a lot more can happen in the 15 months before the final 2012 presidential election. Time is still on our side.