Some people want babies. People I went to high school with are already having them by the twos and threes.  And remember The Real L Word’s Cori and Kacy?!? Pregnancy and parenting in the LGBTQ community, especially from the perspective of the genderqueer or butch, still leaves much to be explored, and representation of a butch dyke pregnancy are few and far between. (Also, have you and your lesbian feminists friends/lovers ever discussed the feminist collective family plan? Read on!)

Enter Pregnant Butch. A. K. Summers began working on the semi-autobiographical Pregnant Butch comic in 2005 following the birth of her son. In the series she shares struggles personally and socially with her pregnancy, and the oddity of being feminized throughout by people who had viewed her as masculine prior to the pregnancy.

Some readers may notice Summers’ work is influenced by Hergé’s Tintin. She explains in an article with Bay Windows, “I loved the idea of wearing things like knee britches and berets and cutting that kind of Tintin-esque figure, rather than being like a ’50s style butch who’s really going for something rougher and tougher.” Fan. In addition to this comic, Summers is also working on a graphic novel for children, The Minotaur and the Bicycle. 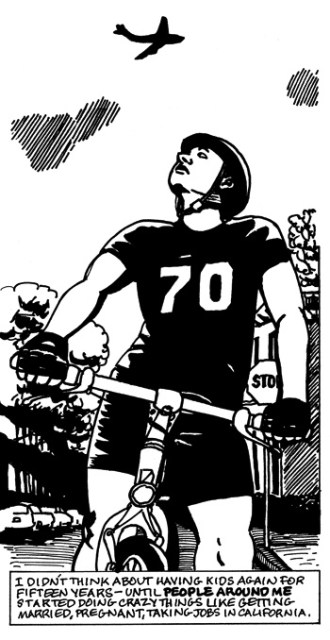 As of December 5, 2011, Pregnant Butch is being released one page per week through the webcomix collective ACT-I-VATE. Check it out now!