Despite being another pretty dark episode of Riverdale — especially when it comes to Betty’s traumatic arc — “Shadow Of A Doubt” is sprinkled with some little fun (and gay) gems, like when Veronica says, without hesitating for even a moment, that her favorite boxer is “Michelle Rodriguez in Girlfight” and Joaquin returns to reveal he’s living in San Junipero.

But the men of Riverdale drag everyone down into the darkness with their toxic masculinity that, in the end, is literally deadly. Let’s start with Veronica, who’s expected to meet with a revolving door of business boys, sharp-featured but ultimately indistinguishable teen boys who have been sent by their families to try to court the Lodges into new (likely less-than-legal) ventures like a sporting arena and a casino and a canned meat empire? Here’s a fun drinking game for this episode: Chug an entire milkshake every time someone says “make your bones.”

One of my favorite details of the alternate universe that Riverdale surely exists in is the fact that prominent mob families trust their teen children to help them run multi-million-dollar businesses and also do their crimes for them. Maybe this is realistic! I wouldn’t know; I’ve never been part of a crime family. But Veronica sure has! And she’s fully back in it after her brief rejection of the family ways last ep, trying to prove herself by taking a huge project on (and also hoping to do it all above board). She even enlists the legal help of attorney (née mayor) McCoy when Hiram initially shuts down her idea of a Sweetwater Casino.

But then Veronica finally, finally seems done with her parents once and for all, pledging her loyalty to Fred Andrews’ mayoral campaign instead of her mother’s. What pushes her there? Well, the Black Hood sort of shows up at town hall during the mayoral debate and starts shooting at everyone (slash no one?), and even though Hermione is clearly shaken up by this incredibly traumatic event, Hiram says they’re moving forward with the campaign anyway, seemingly putting his ambitions over his family’s safety (for like the billionth time?).

So now seems like a good time to really dig into Black Hood theories. The end of last episode nudged Betty — and us by proxy — toward thinking that Hal Cooper is the hooded killer, and that theory checks out pretty well. Maybe too well? This week, Hal’s with Betty when the Black Hood shows up with a gun at town hall, which temporarily convinces her he could be innocent.

Not to get too Pretty Little Liars here, but there almost have to be multiple Black Hoods, right? (Should I start calling them the B Team?) It seems very likely that Hal is at least one of them. In what’s easily the episode’s best storyline, cousin detectives Betty and Cheryl team up for some sleuthing and find… a lot of damning evidence against Hal, including the Nancy Drew book that the Black Hood used as a cypher earlier in the season. (Cheryl also provides more fodder for my Shakespeare/Riverdale games by saying “wherefore comes this accusation?” after Betty first tells her she thinks her pops is a serial killer.) 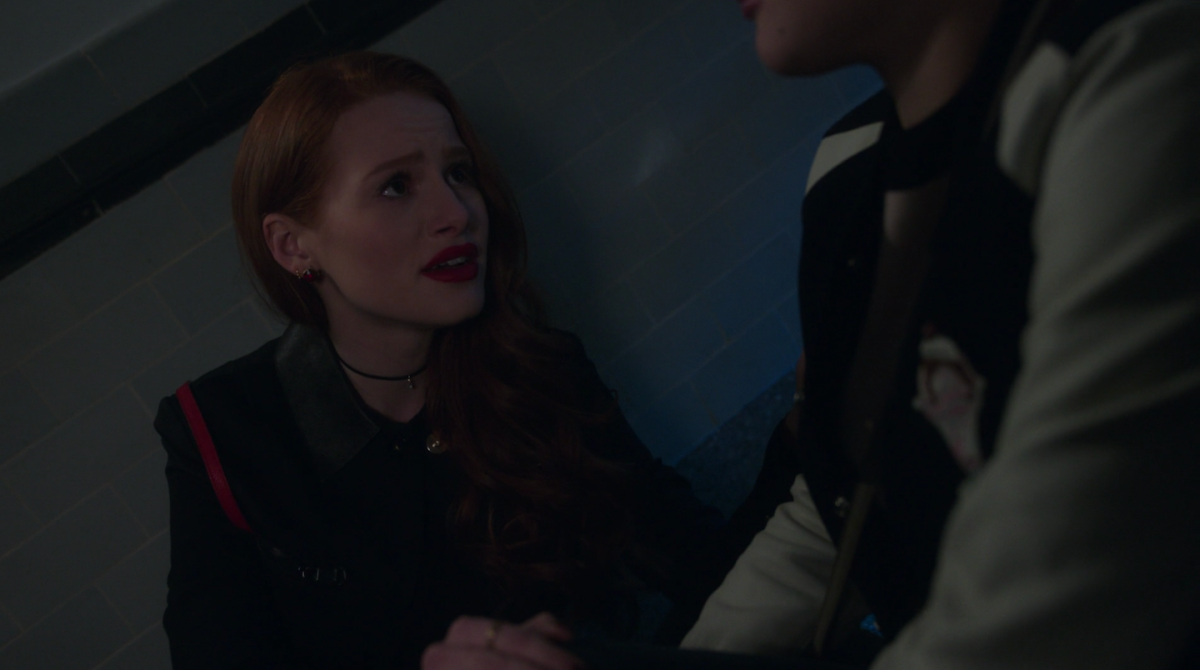 It’s also kind of worth noting that the Black Hood, or at least one of the Black Hoods is a serial killer who’s really bad at murder? He somehow failed to kill Midge and Moose the first time around, even though he was pretty much shooting from point blank. He also failed to kill Fred Andrews, and he managed to fire a bunch of shots into town hall without hitting anyone. It seems likely that at least one of the Black Hoods wants to create chaos without actually killing anyone.

And to me, Hiram Lodge has the perfect motive for that. This kind of instability in the town makes it way easier to peddle his evil private prison plan. It’s how he was able to get Archie on board so quickly. I’d have a hard time believing that at least one of the Black Hoods isn’t in his pocket in some way. And then maybe, as Jughead has pointed out, there’s a copycat killer capitalizing on the Black Hood’s sensationalism by actually murdering people like Midge.

Lili Reinhart, consistently one of the strongest actors on the show, especially when it comes to the drama, gives a compelling performance. Betty teeters on the edge after realizing something that she seems to have known on a subconscious level: There’s a connection between her and the Black Hood. Dark Betty can be a fun, soapy character, but Reinhart also makes sure to remind us that this darkness is real, and it’s tearing Betty up, making her question her own self and morality. Cheryl’s no stranger to the darkness, and she’s there to comfort her along the way, which is just nice and good? If I can’t have Choni scenes, I’ll take this. On that note, Vanessa Morgan has been upped to a series regular for next season! Exciting stuff!

While Betty is grappling with the fact that she could be an accomplice to Chic’s murder and also the daughter of a serial killer, shit is going down between the Serpents and the Bulldogs, which is where that deadly toxic masculinity comes into play. Moose reveals that Midge told him she was seeing a Southsider, which sends aggro Reggie into a full tailspin. In his mind, the Serpents have always been scum (to call Reggie classist would be a huge understatement), and that leads him to believe that they’ve somehow violated Midge, whose status as a Vixen makes her pure and sovereign. Yeah, it’s as gross as it sounds!!!!! And when it gets out that Fangs Fogarty was caught having a conversation with Midge mere minutes before her death, Fangs gets caught between a snarling, vindictive Reggie and the new town sheriff Michael Minetta. Accusing the wrong person of murder is pretty much the town of Riverdale’s modus operandi, especially when the north side can point fingers at the Serpents.

The Dark Circle, the vigilante group started by none other than golden boy Archie Andrews, goes fully rogue, destroying parts of the south side and calling for Fangs’ head. Hiram Lodge, of course, is backing their violent uprising, hoping to drive another wedge between Fred and Archie. When Fangs is finally released from jail, the Dark Circle is pretty much ready to declare war. In a classic Riverdale dramatic climax—a slow-motion scene set to a haunting pop ballad — Jughead, Sweet Pea, and Toni attempt to flank Fangs with other Serpents in order to protect him from harm. In unity, there is strength, after all.

And when Reggie pulls out a gun, Archie tries to stop him, but he’s too late. Fangs is shot, and Archie and Reggie both have their hands on the gun. Finally, there are real consequences for Archie’s increasingly terrible, violent choices. Even though he may have attempted to remove himself from the Dark Circle in this episode, he’s the one who started it. And something as toxic and evil as a vigilante group of teen boys doesn’t just go away because it loses a leader. The town civil war that has defined this season just got a lot more deadly.

Kayla has written 392 articles for us.