“The Noose Tightens” keeps its central players somewhat within the confines of their own storylines this week, so I’m trying something a little different for this recap, which is broken into sections based on the three main ships. Here we go!

Ugh. Veronica and Archie are running for student body president together and have complete and total tunnel vision, caring about little else outside of themselves. Even though Veronica is technically part of the Cheryl rescue mission, which we’ll get to later, that’s almost an afterthought for her. I mean, she literally says “God and Gucci willing, Cheryl’s safe wherever she is” at one point, sort of just brushing Cheryl — who is definitely not safe! — to the side. Instead, she’s mostly focused on her campaign and on selling the Team Varchie brand, which is built on manipulation and domination.

Archie has gone full war dog, a pathetic puppy who does anything Hiram Lodge asks. The gradual radicalization of Archie, as frustrating as the character has been, is actually a very compelling aspect of this season. If you haven’t read this story about Archie becoming a fascist, I recommend it. Archie wants all-in on Hiram’s evil masterplan, inviting himself to a meeting with the other mob men. That meeting is hilariously overwrought, the twangy vaguely Italian music that might play in a red sauce pasta joint playing over their nefarious negotiations. The other families want in on Hiram’s prison, and when they push too hard, sending good ol’ Agent Andrews in to beat the crap out of Andre, he concedes.

But then! Archie hatches a plan to “save Riverdale,” which is really, truly what he thinks he’s doing by protecting Hiram and advocating for the prison! In actuality, he’s using violence to safeguard a despotic, power-hungry man who wants to profit off of others’ suffering. He convinces the bulldogs to help him blow up a car and threaten the mob guys, donning the very thing that used to frighten him: a Black Hood. Just like that, the “Dark Circle,” a terrifying group of violent and angry young boys is born. Archie’s fears have warped him entirely. He doesn’t show up at his dad’s mayoral campaign announcement despite the fact that he told his mom he would. All he cares about is doing Hiram’s bidding.

On his quest to be a hero, Archie has become one of Riverdale’s most dangerous villains. And the Lodges are there at the end of the day to reward him with a blue convertible. Again, while I’m sold on Archie’s descent, I’m less convinced by Veronica’s. I do think a lot of it has to do with the fact that she wants to see the best in her parents, wants to believe they aren’t just bad people, but her blindness is verging on dumb, and the character has previously been portrayed as much smarter and more perceptive than this! If Varchie does come crashing back to reality, my guess is it’ll be because of her and not Archie, who is too far gone at this point.

Things take a downward turn for Alice, FP, Betty, and Jughead when the car Betty and Jughead dumped in a swamp naturally resurfaces and threatens to bring their shared dark secret to the surface along with it. These two families are so inextricably entwined at this point, doomed to bear the burden of what they did. It may have been Chic who “brained” the guy, but they all covered it up together. Their fates are inseparable.

Betty and Jug decide that the best way to act natural is to actually investigate their own crimes. Hey, that’s what they do, right? So they ask Kevin some questions and learn the car actually belonged to the guy’s girlfriend Darla. Then Chic, supposedly with good intentions, calls up Darla himself, inviting danger back into the Cooper household yet again. Darla shows up, asks for $10,000 in exchange for not asking questions about her ex-boyfriend’s disappearance, and makes herself comfortable in the Cooper house. Alice sends Betty to fetch the money but then warns her not to come home when the guy Betty pepper-sprayed for attacking Chic with a boxcutter also makes himself comfortable in the Cooper house. 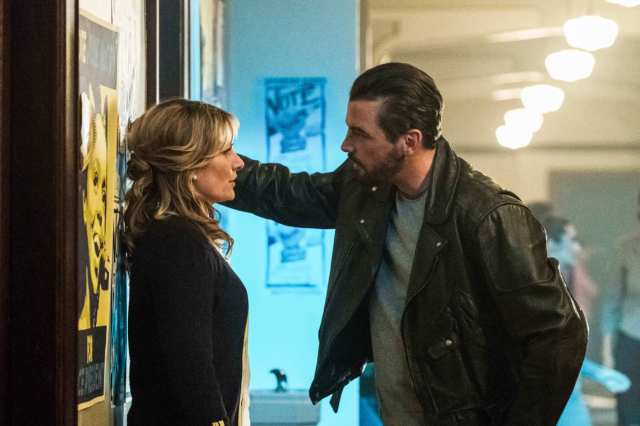 sorry 2 say i ship it

So Betty hatches a plan to save her family and also smooth over things between Alice and the Serpents. Earlier in the episode, Sweet Pea tells Jughead the Serpents won’t vote for him for student body president since he’s running with “the turncoat’s daughter” a.k.a. Betty Cooper, who at one point considers getting a Serpent tattoo to prove her allegiance. These teens need to stop making such drastic decisions based on their high school relationships!!!!

Jughead and the other Serpents just KICK DOWN THE FRONT DOOR of the Cooper house and storm in with switchblades, forcing Darla and Box Cutter Guy out of town. As a thank you, Alice promises to no longer fight the Southside and to instead fight tooth and nail on their behalf alongside Betty. She also tells Chic once and for all that he needs to gtfo. And there also are several moments between Alice and FP in the episode, suggesting that that flame might be rekindled? I’m into it. I’m also into Alice Cooper saying “I will tear this trailer apart with my bare hands,” because I fully believe she’s capable!!!

I saved the most important, and polarizing, storyline for last, because there’s a lot to unpack here. As I wrote last week, I’m not the biggest fan of this conversion therapy storyline, mainly because it went down approximately two seconds after Cheryl came out. This episode doesn’t exactly assuage my doubts, but at least it gets Cheryl out of there quickly.

One of Riverdale’s foremost strengths is its ability to strike a balance between darkness and levity. That’s what camp is often all about, and Riverdale does camp quite well. But the balance of this conversion therapy storyline is off-kilter. The weight of the storyline hangs entirely on Madelaine Petsch’s performance. She has to, quite literally, do all the heavy-lifting. Her scenes, often intimate close-ups that show how emotionally drained Cheryl is, tears perpetually streaming down her cheeks, her spirit broken, are juxtaposed with sillier, campy images, and it just doesn’t look or feel right. 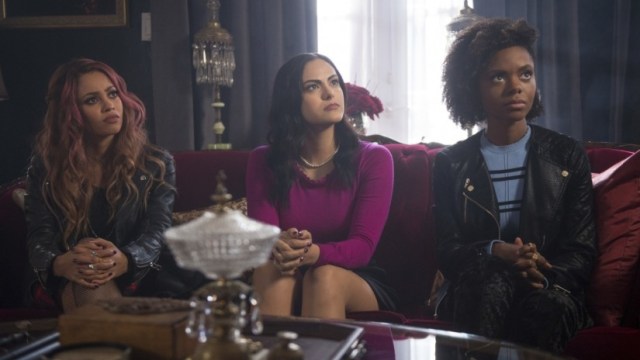 Cheryl’s brief obsession with Josie finally becomes relevant again, Penelope using it to turn Josie against her and to try and pressure Toni to give up looking for her. It’s downright evil, and there better be some sort of comeuppance for Penelope’s violent homophobia, because it’s starting to make her seem cartoonishly wicked. Riverdale is now full of demons, and she’s certainly one of them.

In the end, Toni and Veronica, dressed in a catsuit, swoop in for a grand rescue looking hot as hell, and it’s admittedly quite fun if you don’t think about it too hard. But of course I’m going to think about it too hard! It’s just so ridiculous that Kevin Keller is completely aware of this “off-the-books” gay conversion therapy program happening in town and has never told anyone about it? Because it’s a great pipeline for forrest hookups for him? What?! This show is all about the secret darkness that lurks throughout the seemingly quaint town, and yet this storyline plays out like a parenthesis, oddly disconnected from the narrative at large. It feels like it’s trying too hard to be edgy and doesn’t entirely grapple with the gravity of this situation. Petsch’s performance is the only component that really seems to acknowledge how serious this all is. And for that, she certainly deserves praise. 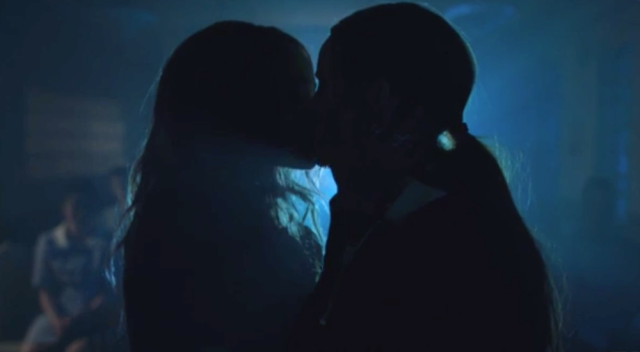 But let’s talk about that kiss, because oh my, it’s a good kiss. Toni busts into movie night at the gay conversion camp and then kisses Cheryl right in front of everyone in the beaming light of the projector. It’s appropriately over-the-top and romantic and courageous, a brief but powerful happy ending to a nightmarish story. Does that make it better? Hell no. I still think the storyline is a tonal mess, working to undo some of the best parts of Cheryl’s coming out story. I’m all for Cheryl going scorched earth again, promising revenge on her mother and “uncle” and saying she’s going to burn the school down with her performance as Carrie in “Carrie: The Musical.” It’s going to be fun, and it’s going to be incendiary. But the way we got here was messy as hell, and now that it’s already over, it’s hard to believe Riverdale will ever fully reconcile with the implications of this poorly executed and indelicate plotline. Hopefully Cheryl and Toni will at least be able to kiss under less nefarious circumstances very soon. And hopefully someone exposes the sisters for all this, too?! Maybe Bughead can investigate something that doesn’t have to do with themselves for once.