Hi hello and welcome to springtime, when the weather has no predictable pattern and neither does my attention span. I am having a very hard time doing anything for more than a few minutes at a time. Maybe it’s because I have new cats and I want to see where they are and what they are doing every minute of every day? Maybe it is because I have new cats and one of them does not like when I pay attention to things that are not in the cat food closet?

What I am trying to tell you is that my hands are covered in tiny scratches and I don’t really know what videogames everybody is playing right now. But here are things I have picked up for five minutes or thirty minutes or maybe even an entire hour at a time lately. 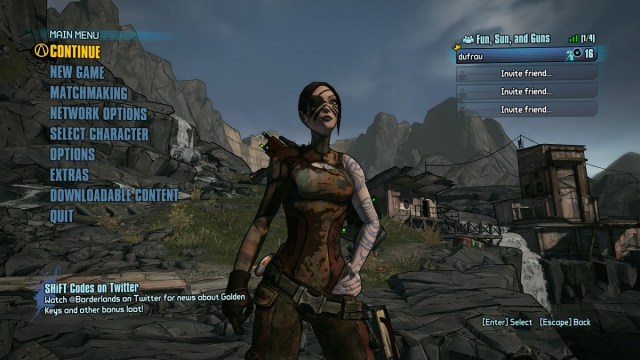 My girl likes to murder all the time.

I’ve played this before, when it came out originally on Playstation 3, but now I’m playing it on my computer which is even better because I can cheat when I get to the part I got stuck at the first time I played. The Borderlands games, if you somehow have never played one, are pretty straightforward shoot-and-loot adventure rpgs, but the writing is fun and charming to a sometimes startling degree. Plus, all the way back to the first game they’ve always had at least one woman character to choose from, which is a thing I like. They hold up really well and I keep coming back to them the same way I do with Skyrim and Fallout. A fourth game is in development now and I’m hoping to see an announcement for it at E3 in June, but who knows.

Play these if you like arcade-y shooters and Diablo-style looting. They are great for playing alone, and even greater for playing co-op with up to three other people. Mayhem! What could be better! 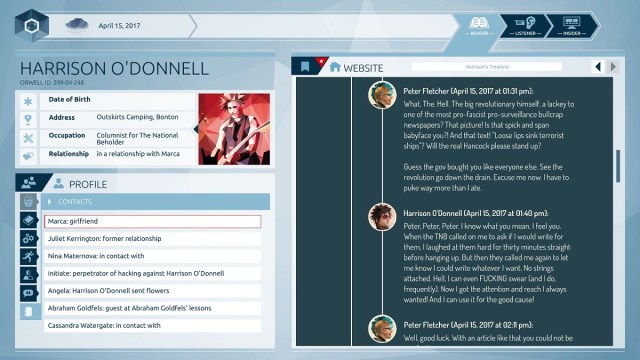 I really want to incriminate this boy.

This game is about four hours long, but it’s broken down into days so it’s easy enough to play a little at a time. Would you like to be a part of the Surveillance State? Probably not, right? But on the other hand, would you like to snoop around in people’s personal business and solve crimes? Kind of, yes! This game makes you part of an experimental government program wherein people are given the job of The Machine from Person of Interest to stop terrorism but also probably put a lot of innocent people in jail at the same time because everything is horrible. You uncover more story by submitting information into the system, forcing you to become more and more complicit. It’s very stressful and compelling! I played it once, getting a kind of middle-of-the-road ending, but I want to try again to see if I can go full revolutionary or maybe just try to blame the men for everything. There’s a sequel to this that was recently released that I’ll probably also pick up at some point. I really liked this game. 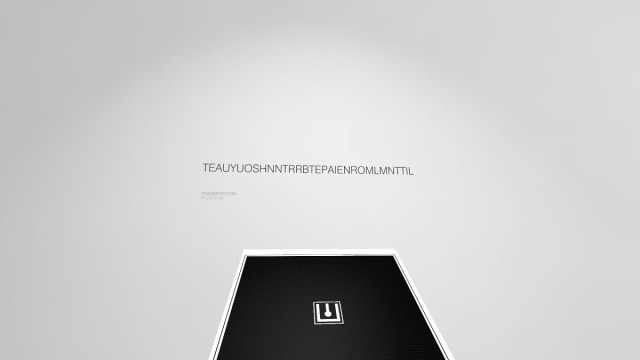 Codebreaking! Really that’s all this is. Every room gives you a brief lesson on the history of a certain type of cryptography, then lets you loose to try to solve a handful of puzzles using that kind of code. It’s honestly super difficult. If you want to figure out how your own brain works, this game will teach you a few things about yourself. The straight up logic puzzles were a joy for me to work on, but some other puzzles are just like “Legit the words are just diagonal, you dummy” and my brain just could not see it. You’ll want a pencil and paper handy for this one, because it will be necessary for solving a lot of the puzzles and also because you’ll feel like a real secret genius leaving nonsensical codebreaking notes all over the house. 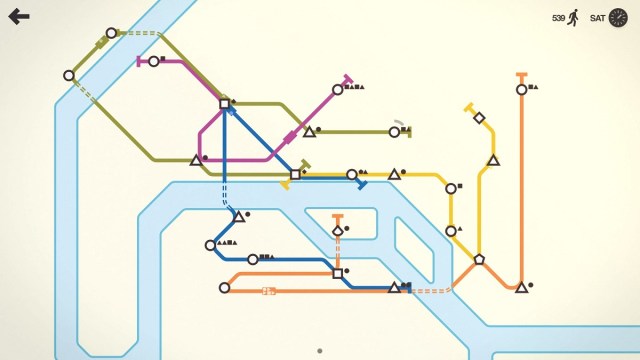 If you think this game has given me sympathy for the MBTA, you are wrong.

I actually just started playing this last night but I am at least temporarily obsessed with it. It’s sort of a puzzle game, but more like an incredibly simplistic city builder. You have to create train lines to connect neighborhoods as they pop up. Every neighborhood is represented by a shape, and you want all of your train lines to connect to at least one of every shape so passengers can get to everywhere as easily as possible. It starts out peaceful and relaxing but the longer it goes, the bigger the map gets and the higher the volume of passengers gets, until suddenly civilization collapses because your stations are too crowded. The UI is simple and gorgeous and the sound is also really calming and nice. Clean UI and design is so pleasing to me I cannot even put it into words, and this game really scratches an itch just by looking so correct. 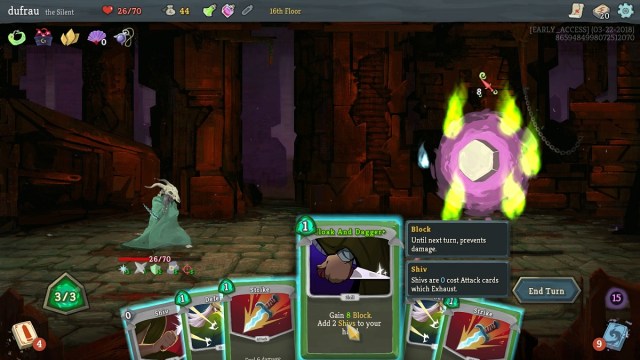 I am winning, i promise!

Okay, this game is actually one of my top ten games released last year, even though it’s still in early access. It’s a roguelite card-combat game. It’s simple and approachable, but also very hard and surprisingly deep in terms of strategy. You have to build your deck on the fly, so you pick a meta early and hope you get the right cards to make it work. It forces you to try different approaches and playstyles. I’ve only beat it once, but I keep coming back for more punishment. The gameplay is just really tight, everything works really well, and every time I lose I feel like if I had drawn one different card or if I could have afforded that one trinket from the shop I might just have pulled out the win. The game is updated weekly, and They’ve recently added daily runs, so you can see how much worse you are at the game than everybody else is. Or how much better, if you are not me. I love it. I want everybody to play it. 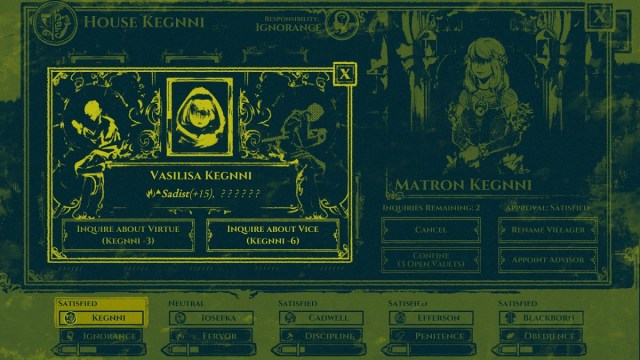 There’s a lot going on here, but basically, sadism is a virtue.

This is a management/strategy game where you play as the person in charge of a culty island that worships some kind of big bad, and you need to keep everybody sufficiently ignorant and pious and disciplined to please the gods, while also finding out people’s strengths and weaknesses so you can choose the perfect human sacrifice at the end of every season. It’s pretty messed up! And it turns out keeping cultists happy is just as difficult as keeping the trains running on time in Mini Metro. I am glad to know for sure now that I definitely do not want to be in charge of a cult. The art in this game is in a two-color woodblock printing style. It’s very nice to look at.

Besides Borderlands, which you can play on basically everything, the rest of these I played on my Windows laptop. Some are also playable on Macs, and a couple might even have mobile ports (Mini Metro does, for sure.) What are you playing lately? What should I be playing? How do I make a giant cat stop scratching my videog ame chair?