After appearing to come to terms with what most of America has known for quite a while now, which is that he’s not going to be nominated to run against President Obama as the Republican presidential candidate, Rick Santorum has suspended his campaign. A number of groups won’t be sorry to see Santorum leave the race; namely, women, gays, people who enjoy or at least don’t oppose the existence of porn, anyone with any respect for the California school system, people who believe in the separation of church and state, and virtually everyone else who isn’t a fetus. Well, actually, Santorum says that the decision to leave the race was hard for his family, even harder than it was on him. But now that Romney is ahead of Santorum even in Santorum’s home state of Pennsylvania, it seems clear that it’s time to go. When asked what his plans were now that he’s out of the race, Santorum said he’d “like to get some sleep,” which is maybe the most likable thing Santorum has said to the press since he began his campaign. 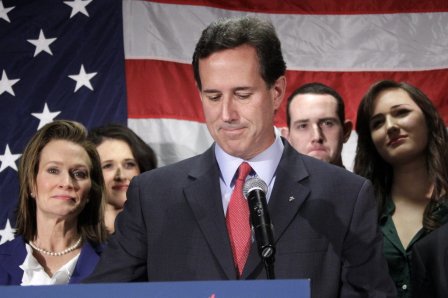 Santorum joins Jon Huntsman and Rick Perry as far as candidates who have officially dropped out, although it seems to be agreed upon that Romney will be the final GOP nominee. This creates a confusing situation with regard to their super PACs, or political action committees — organizations that existed to amass and then spend money to support their candidate’s campaign, and/or smear other candidates. The super PAC supporting Santorum, called The Red White and Blue Fund, has stated somewhat obliquely that Santorum is “suspending his campaign but not the fight,” leaving things unclear as far as where the super PAC’s money will end up. Other super PACs may arise in anticipation of the general election, and there’s talk of a plan for super PACs whose focus is just anti-Obama campaigning. In that sense, Santorum’s dropping out of the race doesn’t necessarily mean that he and his supporters don’t still pose a problem for the incumbent Democratic administration.

It’s also possible that Santorum himself isn’t quite as out of the presidential race as ending his campaign may make him seem. Romney still has to choose a runningmate, and while to many people following along from home Santorum may seem like a horrifying idea for a vice president, it’s not a terrible idea to choose the person who had the most support and try to capture the largest vote possible. Santorum hasn’t yet officially endorsed Romney for President, seeing as he’s only dropped out himself in the last 24 hours, but Romney made some statements almost immediately following Santorum’s announcement that seem pointed: “You’ll see us all come together in a powerful way, but the time for that will happen down the road as we spend more time together and hit the trail together.” It’s not a sure thing, but it’s possible that those who have groaned about the prospect of having to choose whether Romney or Santorum are worse will no longer have to make that decision. Even if Romney doesn’t choose to run with Santorum, his other options aren’t much more inspiring; it’s unlikely that he’ll choose a more liberal candidate like Huntsman, as they won’t accomplish the goal of scooping up the far right vote.

Whether Santorum becomes half of Romney’s ticket or not, it’s maybe not a good idea to write him off entirely. While a majority of the population maybe found Santorum something of an eye-roll by the end of his campaign, a very significant (and vocal) minority took (and still takes) him very seriously. Not unlike Sarah Palin, the connection he’s made with a rabidly conservative cultural base means that he may well stick around in lower levels of political action even if he’s not a Presidential candidate, he may well be a political commentator or FOX News talking head or at the very least, the subject of a deeply self-serious ghostwritten memoir. Although Santorum didn’t do as well as he clearly hoped, he did better than most expected — as Hot Air’s Ed Morrissey said, “Santorum won 10 states… anyone who would have guessed that he could have won more than two is lying.” If we didn’t foresee his (relative) success here, he may have more in his future that we don’t see coming either. The Washington Post’s Jennifer Rubin says, “For cynics, it was maybe the first speech of his next campaign, an option he leaves open by not fighting to the bitter end and by not making himself a pariah in the race.”

Regardless of where Santorum does or doesn’t go from here, there’s a lot we can take away from his campaign so far. He’s a candidate with strongly faith-based rhetoric that calls into question the agency and humanity of women (especially single mothers and pregnant women), queers, and generally anyone who’s not a straight white man. He proved less popular than a slightly more moderate candidate who has marginally more liberal views on healthcare and reproductive rights, but there was a point when we weren’t sure that this was the case. When discussing his future runningmate, Romney said that “You will see our part more united than it’s been in a long, long time in part because President Obama has taken America in such a different course than we have ever gone as a nation before.” While the point he’s trying to make is debatably true, it’s certainly something that a lot of people in America believe. And their reactionary feelings about what they read as an attack on them and their values means that candidates like Santorum, who deal more in rhetoric and playing to “values” and “demographics” than they do in policy or serving their constituency, are irrationally powerful. And that’s something we need to keep an eye on, no matter what happens with one status-quo-defending white man in a tie.