Phyllis “Seven” Harris, age 54, the Executive Director of the LGBT Center of Greater Cleveland, is the center’s first black lesbian director. She began acting as Director in 2012, and has since taken the center to amazing new heights.

Most recently, the center acquired a beautiful new building on Cleveland’s west side that really signals to the community that we’re not hiding and are proud of who we are. However, because of COVID-19 Seven and I met from the comfort of our own homes via Zoom. We began our meeting discussing the pandemic and how it has impacted the center’s work.

“My activist flame is fired up,” Seven started. “I told my staff, board, volunteers — this is when your activist wings are on. It’s time to act up, because we cannot be left behind in this in terms of our vulnerability.” By the end of our interview, I would come to truly know how long that activist flame has been burning for Seven. 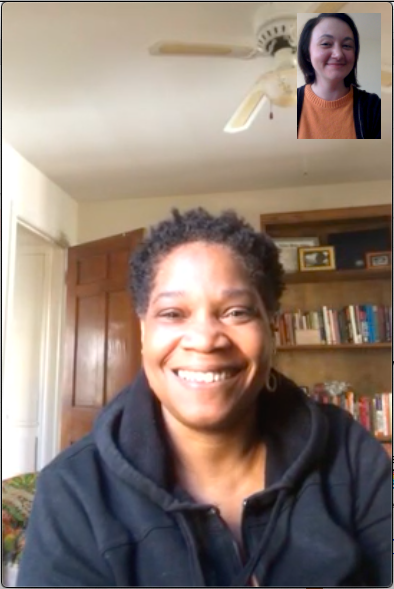 The center’s existing programming is still up and running, but is now virtual. They’ve also introduced new programming in the wake of COVID-19. They currently have 25 people working to call LGBT elders with scripted questions to help assess their needs during this time. LGBT elders are not only an at-risk group for COVID-19, but are also more likely than non-LGBT elders to live alone and not have supportive family members.

The center is also delivering safer sex kits and Prep copay cards to folks in need, because as Seven explains “the sex work hasn’t ended. People need to be safe.” While so many businesses are running on standby, organizations like the LGBT Center of Greater Cleveland are working to ensure the safety of our people.

Seven spoke about Kimberlé Crenshaw, a lawyer and founder of critical race theory, who famously described how “all of the -isms are interconnected. So as we’re doing this work around sexism and gender oppression and rape culture, you gotta think about racism and classism and all of those other things.” This intersectional understanding of social justice became the inspiration for Seven’s career.

While talking about COVID-19 is difficult to avoid, we soon turned to other aspects of Seven’s life.

Seven knew she was gay for some time before her first girlfriend at 19. “I came out to a community of lesbian feminists, some separatists, and Cleveland Heights had lots of amazing role models of women just being amazing. Because I had community, I could grow and learn and thrive and figure out who I am.”

Later, while in her late twenties, Seven moved to San Francisco to work as a pharmacy tech at the height of the AIDS epidemic. She got a job at a Walgreens on 18th and Castro Street.

“I could see fear in people’s eyes, so I learned to be respectful, to keep my gaze in a way that was gentle and was soft as they were paying for these drugs that may or may not work, and it was so expensive. They’d write a check, and I’d have to look at their driver’s license, and their photo was from three years ago when they looked vastly different. But I’d keep my gaze soft, and make sure I put their change or the pen in their hand and not on the counter.”

“Yes, I’m not afraid of you. I’m rooting for you, and I’m so sorry this is happening.” Seven soon began volunteering to do home visits for people with HIV. 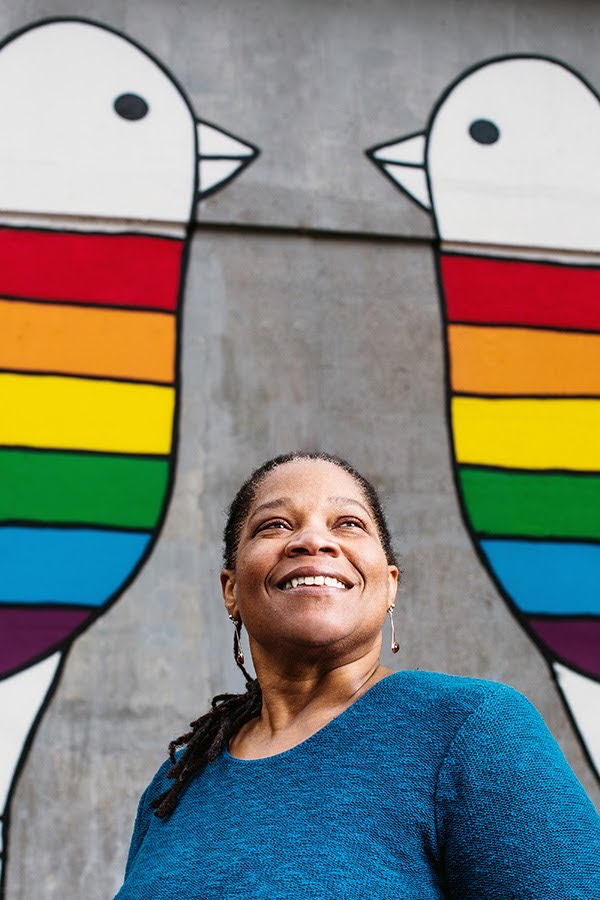 Seven was soon scouted by the Cleveland Rape Crisis Center, and started working there as well, working part-time at both organizations which happened to be across the street from each other. “That grew my experience around prevention education, and learning how to not be judgmental and all the other -isms people with privilege can be.”

I talked to Seven about how she seems to have been a “for lifer” in non-profit work, and about how people with the drive to do anti-oppression work seem to have an internal resilience and sense of confidence at their core.

“Yeah. I remember looking at myself in the mirror and going ‘Oh my god. I’m a lesbian? That’s what I am? Geez, why?’ But only for a second. Only for a second. Because I had great role models.”

Seven continued, “The game changer for me, I was gonna do what I was gonna do, but what helped me around my confidence in general was that my mother didn’t reject me.” She shared the importance of having parents who accept you, adding, “[My mom] basically said ‘I know who you are. You came from my body. You’re my child.’ I truly believe with my whole heart if LGBTQ+ people have the privilege to have parents who are willing to do the work around their heteronormative view of who has privilege and who doesn’t and who gets love or who doesn’t, then a lot more of us will be alright and the whole world would be too. We wouldn’t have all of the issues we have and the health disparities. So get it together. Love your children.”

Seven has two children of her own. “I tell people I birthed my son, and I caught my daughter.”
I mentioned how she’s had such a massive career and a family, and how people always ask women how they have both and don’t ask men. With men it’s assumed there’s a woman behind the scenes making it all work. It’s also harder for queer people to have children. I wondered how she’d been able to make work, and make it work well.

“I’ve been able to raise healthy whole children through breakups and divorce and all of the messy stuff adults do because of all of the support of many people.” Seven went on to list her ex partner’s family, her children’s schools, and her friends. Leaning on many people for support is unique to queer family systems and other family types that deviate from the heterosexual nuclear family. I think children can be much better as a result of it. Maybe we’ll have the studies to show us that one day.

To close, I asked Seven what advice she’d give to younger LGBTQ+ people.

“Keep on living,” Seven said, “Things are real in terms of what you feel and what you’re experiencing right now. The idea is to continue to grow and develop into a healthy and whole individual, and to understand that we are part of a movement. We’re marginalized individuals who are stronger together. If you can get there and mitigate some of the things that hold us back like getting caught up with addiction, self-medicating, not taking care of ourselves mentally and physically. If you can get through that and find support, on the other side of that is a remarkable adult life. So keep on living. Get on the other side of this. There’s more.”