The women of The Real L Word are coming together this Saturday, September 24th at All’s FAIR in L’s & Basketball, a charity basketball game for Vote for Equality‘s efforts to defend The FAIR Education Act, which will now require the inclusion of gay and lesbian as well as disabled leaders that have made contributions to our society in History class.  It’s the first law of its kind in the country and is currently facing repeal. The goal of the event is to involve all sectors of the LGBTQ community, as well as straight allies, in a positive environment for not only an exciting game but an opportunity to actively support the cause. Vote for Equality has been working since 2008 to combat anti-LGBT prejudice and to defeat our oppositions messaging to ultimately win ballot measures.

So, just who is involved in this good game of lezzie b-ball? Well, Sajdah (along with partner Tawana Briggs and Chanel Brown) has wrangled together cast members from Seasons 1 and 2, including Whitney, Rose, Jill, Kelsey, Francine, and Kacy (with Nikki and Cori cheering from the stands, like the good ‘pumps’ they are).

It will almost certainly go down something like this: 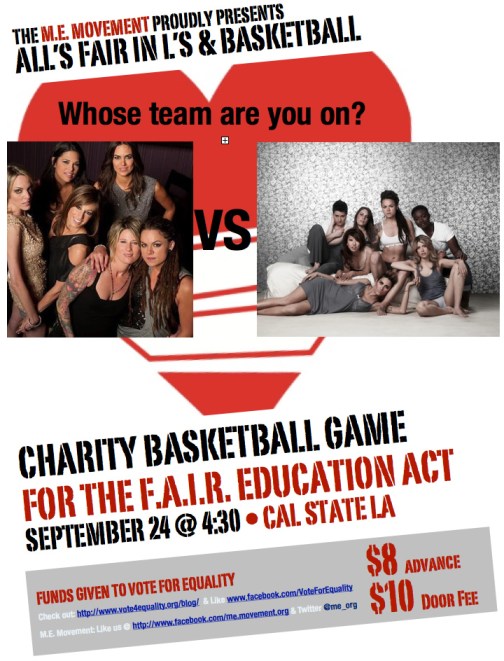