There wasn’t a lot of fanfare from the Pentagon when DADT officially ended on Tuesday; no speeches, no ceremony, no celebration. There was, however, a Marine recruiting table down at the gay community center in Tulsa on Tuesday morning.  After years of protestation that openly gay soldiers would be a detriment to our nation’s military capabilities, with the Marines often cited as the repeal’s most vocal opponents, Master Sgt. Anthony Henry and Staff Sgt. Chris Cano headed down to the Dennis R. Neill Equality Center with a table and a chinup bar to look for recruits.

They were there at the request of the the center’s executive director, Toby Jenkins, who actually called to ask if it would be possible to have recruiters available on the day DADT was finally over.

“If we’ve been fighting for 15 years for the right to be in the military, we said, ‘Let’s just ask military recruiters if they’d be available,’ ” he said. “But no one was prepared for that question. It was like I was talking to people like they were deer in the headlights.” 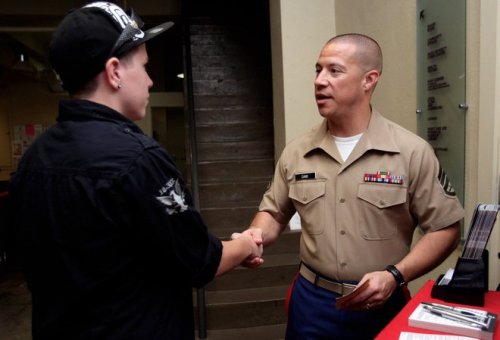 The scene outlined in the NYT article is surprisingly endearing; watching the recruiters and the women of the Equality Center approach each other warily feels almost like watching high schoolers at a dance. For the most part, the demise of DADT won’t be something that the average citizen is able to see — what goes on in barracks, in training, at boot camp, in combat, will always be out of sight for us. But this was in public; this was a moment that everyone could see. And so local television crews flocked to the scene, easily outnumbering the people actually visiting the recruiting table.

Military service is an option disproportionately taken advantage of by people who are economically and/or educationally disadvantaged, who are of color, who are marginalized, who for a lot of reasons may not have a lot of other choices. Until now, queer people — who are often economically and educationally disadvantaged, who are of color, who are marginalized, who often don’t have the choices that straight people do — haven’t been able to take this opportunity. At least not openly, not without hiding a huge portion of their lives, without acknowledging all of who they were and are up to this moment. It’s a small thing, objectively speaking, in one gay community center in Tulsa. It’s a huge thing, in a lot of ways, this one thing in Tulsa. For a lot of people, the repeal of DADT has been a fairly divisive issue; for those especially who oppose America’s current wars or the concept of war, it was difficult to support a model of queer equality centered around a repeal of DADT. But this is what it looks like, regardless of how you feel about the larger issues inferred by military service. This is what has finally come to pass:

[Ariel] Pratt, 20, asked Sergeant Henry what he liked about the Marines.

“It’s like a little family,” he said. “We get mad at each other, we joke with each other, but we don’t let anybody else make fun of us.”