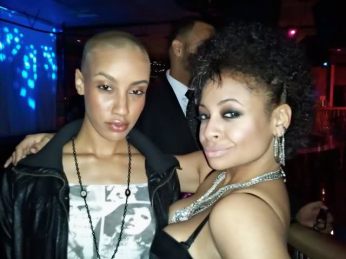 Earlier this week it was reported by The National Enquirer, World’s Least Reliable News Source, that actress/singer Raven-Symoné, currently starring in Sister Act on Broadway, is a lesbian currently in a relationship with AzMarie, this smokin’ hot androgynous model who recently appeared on the Tyra Banks Television Spectacular America’s Next Top Model. The story made the standard rounds and was brought to our attention about five billion times by various readers.

Raven-Symoné has reportedly come out of the closet, this according to the website MediaTakeOut. They claim to have gotten the news from the National Enquirer (they NEVER publish anything misleading or false), who are claiming the actress is now officially out. Their report claims:

Sources close to Raven say she’s GAY and has shacked up with AzMarie Livingston, the androgynous beauty seen on “America’s Next Top Model.” The two are living together in Raven’s luxury $11,00-a-month [sic] New York City condo.. . .

She’s at a point now where she doesn’t care what her family thinks, and she’s in love with AzMarie. She’s a lesbian and wants to live that way.”

At Headquarters, we were undoubtedly titillated by this development, and not just because “That’s So Raven” is the best television show title of all time and offers endless opportunities for editorial riffs  — we were excited because Raven-Symoné is cool, her alleged girlfriend is hot, and it’d be sweet to have her on our team. Personally, when I was a little girl I wished upon a star quite often that Olivia from The Cosby Show would be my best friend forever. She was just so cute and so so so funny and I thought she was just the best. Just the best!

But, without any confirmation from Raven herself or news from any reputable sources, we had to keep that excitement in-house, which was devastating as we generally like discussing these sorts of things with the group. Editorial Assistant Bren had the following brilliant idea: “If Sarah Croce would just go ask her about sweet figs or something, then we’d know for sure.”

This isn’t the first time such rumors have made the news. In 2008, Raven responded to lesbian rumors with an all-caps denial:

ME DATING A GIRL: EVEN THO I ADORE MY GAY AND LESBIAN COMMUNITY!!!!!! I HANG AND CHILL WITH THEM, AND ADMIRE THEIR FIERCE-NESS. AND LEARN FROM THEM EVERYDAY. I HAVE THIS TO SAY… 1) ITS FALSE THAT IM DATING A GIRL RIGHT NOW. 2)RUDE TO QUESTION SOMETHING SO PERSONAL. WE ARE ALWAYS FIGHTING FOR THE RIGHTS FOR THE GAY AND LESBIAN COMMUNITY. ITS NOT A FAD FOR THEM, ITS NOT THE NEXT COOL BAG FOR THEM, ITS WHO THEY ARE, AND I THINK THAT FALSLY ACCUSING SOMEONE, WATERS DOWN THE IMPORTANCE OF ACTUALLY SAYING YES TO GAY WEDLOCK, AND OTHER RIGHTS FOR THAT MOST AMAZING COMMUNITY.

Her response to this round of rumors was a bit more subdued, and suggestive: 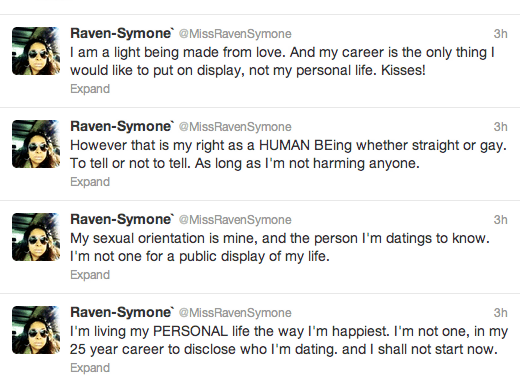 Honestly, I’m having a hard time figuring out what to say about all this — but I do want to know what you think! I like Raven-Symoné a lot and it’d be really cool for media representation if she came out — she’s talented, smokin’ hot, super-successful, and a woman of color. Furthermore, Raven-Symoné is undoubtedly an LGBT ally — she even posed for a No H8 shoot, and recently performed at a Broadway Cares/Equity Fights AIDS event.

Ultimately, I think most people agree that nobody is obligated to come out, even celebrities who stand to make a huge impact by doing so, and “outing” is only acceptable in the case of, say, a political figure who is actively pursuing anti-gay legislation while riding the homosexual pony in his off-hours.  Raven is definitely not that, and the only person who knows what’s best for Raven is, ultimately, Raven.

But damn. I really wanted to be able to title this article “That’s So Gayven,” you know?