Every weekday on the Ellen DeGeneres Show we get to watch Ellen dance, interview Taylor Swift, show funny YouTube videos and occasionally even go head to head with John McCain on Gay Marriage. Every weeknight we get to watch Rachel Maddow go head to head with everyone, win and occasionally even teach us how to make a mean cocktail. Sometimes, life is pretty good to us here in Lezland. While I can’t comprehend why they don’t just have an awesome TV station all to themselves, Ellen did interview Rachel Maddow on her show on Thursday! (Is it just me, or do you also always want to call Rachel Maddow by her full name?) 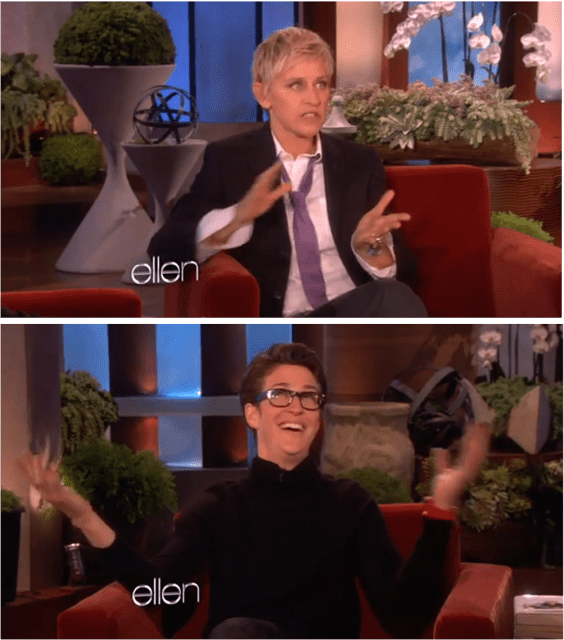 Rachel talked about the new documentary she appeared in, Miss Representation directed by Jennifer Siebel Newsom. The documentary interviews teenage girls as well as powerful female figures (Maddow included) to link women’s generally crappy portrayal in the media with their poor representation in positions of power. According to Maddow:

“Recently, media has gotten really specifically hyper sexual about the way that women are treated. Women always sort of portrayed in really hyper sexual and sometimes hyper-violent ways. In a way that I think is something new. Like, the last decade it’s been new. And video games have sort of made it worse, but also it’s just the way our culture represents women right now and how that gives girls tunnel vision about what are okay ways to be.

Then Ellen asked Rachel Maddow about her own experiences with this and Rachel Maddow answers, of course, beautifully and hilariously. I would quote her, but it just sounds better when she says it in response to the silky-smooth sound of Ellen’s questions. Here, watch it! It’ll make your day.