After the last Queered Science post, about Dr. Ben Barres and how his transgender status gave him new insights into gender bias inherent in the sciences, we had a number of comments about gender bias, how to recognize it, and how to deal with it. Gender bias, especially in professional settings, is rarely an overt statement or action that you can name, report, write down, yell about or feel angry about. No, it’s much more subtle. Instead of leaving you righteously angry and ready to take down the whole department if need be in the face of your brave and downright meritorious cause, brushes with gender bias will often leave you with nothing but a rank pool of suspicion and self-doubt lurking in the pit of your stomach. Ew. 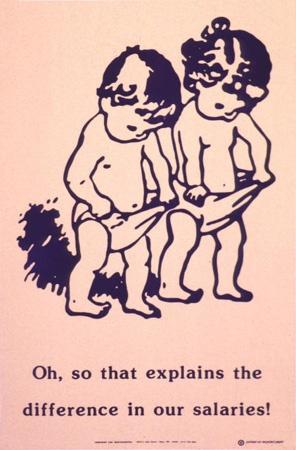 We are taught so young, y’all, so so young. (via thecollaboratory.wikidot.com)

So how do you handle this? How do you work for equality in your workplace (or school or neighborhood or life) while still surviving and trying to be seen as a successful human in your field of choice at the same time? This is what one gender bias expert, a law professor at UC Berkeley, suggests: smile a lot, make yourself less threatening, and soften your message so it’s easier for other people to accept.

Or how about this one, from Joan Williams, law professor at UC Hastings.

This sounds like just trying to fit even further into the gender role stereotypes that are so constricting and problematic in the first place. Soften my message? Smile more – but definitely don’t flirt, that’s a line we have to walk, too? Ok so maybe people will like me as a person, because I’m being non-threatening and friendly, but those tactics don’t effect any real change. And, more than that, I’m leaving the exact same walls and barriers still standing in the way of everyone else who comes behind me.

Now, Williams does preface her statement with the fact that you really want to change the workplace expectations first and foremost. And I like her last phrase: “It’s better to be a bitch than a doormat.” But it’s frustrating that we even need to prove that we are ‘sufficiently feminine’ (and what does that even mean anyway?) to get further ahead. The idea that being stereotypically femme-y is a prerequisite to getting any good feminist work done is short-sighted, counter-effective, and just plain backwards. Like our awesome reader Becky said, this kind of advice is like handing us the psychological equivalent of an apron and frying pan.

But in thinking about other potential strategies, here is the problem I keep coming up with: fixing gender bias is not our responsibility. The burden should be on those who are biased, and if a coworker really thinks I’m less deserving /intelligent /reliable /creative /whateverthehellelse just because I’m a woman then there’s not a lot I can do anyway.

At the same time, if we don’t do it, who will, right? And if we want to succeed in a male-dominated profession, we are going to come up against this sooner or later.

So I’m asking you, dear readers — magical alchemists who take the cruddy drudgery of working in the world of misogyny and other assorted problems and turn it into nuggets of social-justice learning-moment gold — what do you do? What strategies do you or people you know (or could you, or could others) employ to combat gender bias or any other kind of latent discrimination? Let’s talk about it.

And here’s a little gold nugget of a video, just to end on a happy note.

Shauna Marshall, Academic Dean at UC Hastings: “It’s ok not to be liked. It’s better to be respected. So go with that.” (via genderbiasbingo.com)