The annual LGBTQ activism conference “Creating Change” got off to an explosive start in Denver when a group of trans and queer people of color stormed the stage in protest at the opening plenary. The action was sparked by the recent death of an unarmed 17-year-old queer Latina, Jessie Hernandez, at the hands of a Denver Police officer, along with the murders of trans women of color — Lamia Beard, Ty Underwood, Goddess Edwards, Yazmin Payne, and Taja Gabrielle de Jesus — across the country in the last month.

As plenary host Kate Clinton was making her opening remarks, dozens of protesters marched to the stage and took to the podium. They carried signs saying “Not 1+ Trans Life” and “Trans Leadership now. They lead the assembled crowd in chanting “Trans Lives Matter” and “Jessie! Presente!” as Trans Latina Coalition president Bamby Salcedo stepped to the microphone to voice the concerns of QTPOC community. Salcedo wasted no time into getting right to the heart of their life-or-death concerns:

“Our community is getting killed. We’re here to bring awareness and attention to the issues of structural violence that continues to kill trans people, particularly trans people of color.” 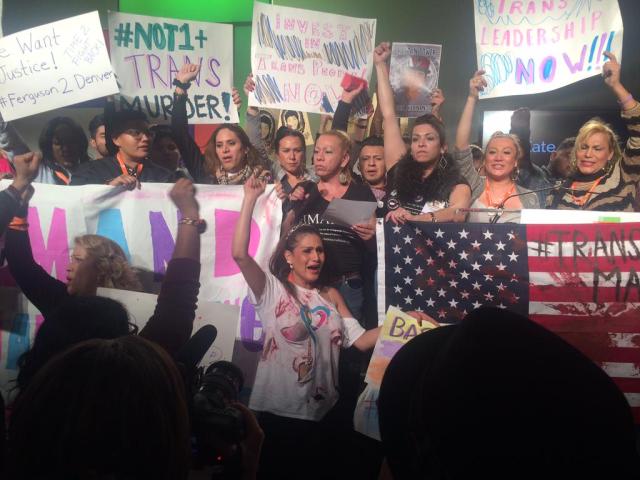 “We’re here demanding intentional, meaningful investment in our community, and in our community efforts to end this motherf*cking epidemic. We are demanding funders and organizers, especially LGBT foundations and granters, to intentionally invest in the trans community… We demand meaningful equity of resources in order to eradicate our economic and health crisis that our brothers and sisters face daily. LGBT and ally organizations need to hire trans people in leadership and give us leadership positions within those organizations. We demand these organizations be intentionally inclusive in providing leadership opportunities for the trans community. If you serve us, you need to include us.”

Denver Mayor Michael Hancock had been scheduled to address the Creating Change opening plenary, and a second speaker from the protest made it clear that they were not pleased the National LGBTQ’ Task Force’s decision to invite him to the conference:

“We welcome you to Denver, a city that is mourning the loss of a sister, a warrior, a lover, and a fellow queer person, whose life was taken last Monday at the hands of Denver Police. We see it as hypocritical that the mayor of Denver, the city with the second highest rate of police killings, would be invited here to welcome you all to Denver.”

Roybal also announced that the mayor would not be speaking, to the applause and cheers of the crowd.

A complete video of the protest was posted by The Task Force on Youtube.

The Creating Change conference continues through Sunday in Denver.