You’ve probably already heard of the protests in Istanbul’s Taksim Gezi Park. For a few weeks in early June, an anti-government movement from across Turkish society occupied the park until the police used tear gas and water cannons to clear it on June 15th. The worldwide media was all over it, comparing the protest both to the U.S. Occupy movement and to the Arab Spring revolutions last year. So you probably know how central women’s issues were to the cause, and you probably know how diverse and yet egalitarian the protest became.

But what you probably did not know – because the mainstream media didn’t cover it much at all – is how queer the movement was! Taksim Gezi was the place for gay men to cruise, as well as a meeting place for queers of all kinds; it’s like a combination of Dolores Park in San Francisco and the Ramble in Central Park in New York. The park is situated in the heart of the gay neighborhood, called Beyoglu. In a country and city where homosexuality is still strongly taboo, Beyoglu holds special significance to queer Turks, because it is one of the only places where they can safely be queer. So while Taksim became a symbol for a whole social movement, it also carried a personal weight for the queer community. As the protest took shape and grew, queer people were on the front lines, and both women’s and LGBT rights became central issues.

I was in Istanbul during the protest, so I ignored the warnings of the U.S. Embassy and visited the park to investigate the events first-hand. Honestly, it felt like a big street fair, with grinning young people talking excitedly and colorful banners everywhere – except for the ominous threat of hundreds of policemen surrounding the perimeter three blocks deep in each direction, their riot shields lying nearby ready for use and their fingers resting casually on the safeties of their semi-automatic assault rifles. The air smelled faintly of smoke from fire bombs thrown a few days earlier, and everyone sat on colorful blankets or little seats of cardboard; they told me not to touch the ground because tear gas had been sprayed a few days earlier and it was still potent. “Sure, of course,” I said, not fully believing them. But when I sat on the ground a little while later and then unthinkingly rubbed my eyes, they immediately began to sting; my throat started to swell up and my face started to itch, and I ran to a Starbucks down the street and scrubbed my face in a panic. 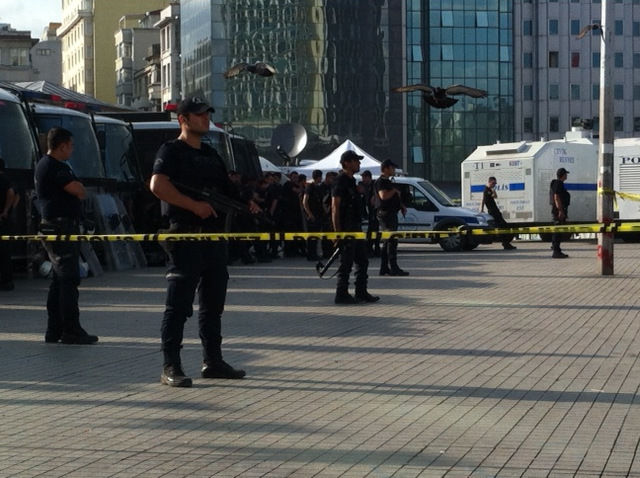 Policemen surrounding the square. Note the buses behind them full of riot supplies, and their fingers resting on the safety catches of their guns.

All that notwithstanding, smack in the center of the park was a large and popular LGBT tent where young and hip-looking queers of all shades stood snacking on pretzels and soy milk. While I hyperventilated about all the guns around, they leaned against the fence, chatting in English about queer theory and the democratic process. Surrounding the central tent were countless little tents staked so closely together that you could barely walk between them. Amongst them people rested, read or talked together casually. If I didn’t know better I would have thought it was a week-long Pride camp out. 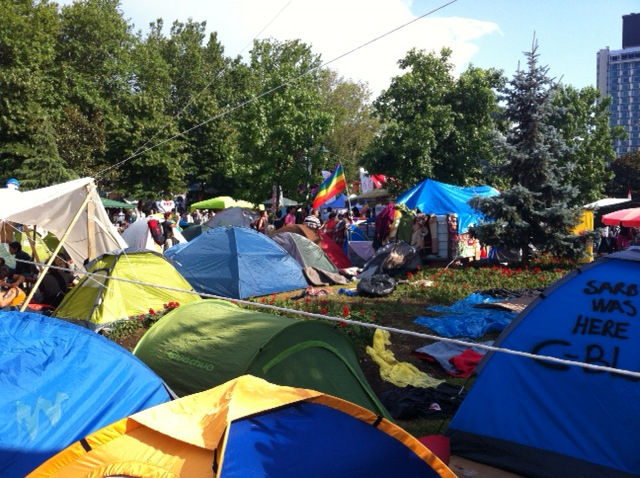 The tent city around the LGBT tent

At the front of the tent stood Irem Guven, a 24-year-old tall and assertive-looking woman with short blonde hair and a white tank top. She is getting a master’s degree in philosophy and had been involved in the protest since its inception. “We’re here to demand our democratic rights,” she said, before I could even finish formulating a question. The LGBT contingent of the protest was made up of multiple different organizations from across the city, she said, but when plans to destroy the park were made public, they all rallied together. Now, they form a foundational part of the movement.

Their involvement is particularly important because LGBT rights are hit-or-miss in Turkey. Homosexual activity is legal, but sexuality is not protected under civil rights laws. And while it’s not as extreme as neighboring states like Syria or Iran, significant anti-gay discrimination is still common. Even in Beyoglu, gay bars are hard to find; you have to spot a rainbow flag flying at the top of a building, then scour the signs below for the one you’re looking for. Locations move frequently and they often exist only in small rooms on the top floors of buildings. In most of the city, being gay is tolerated at best; the few blocks around the park are the only place where same-sex couples will dare to be seen holding hands and even this has a somewhat furtive feeling about it. “This, Beyoglu – this is all we have,” Irem said. “Without this area, we have nowhere else to go. Them coming in here felt like they attacked us ourselves.” 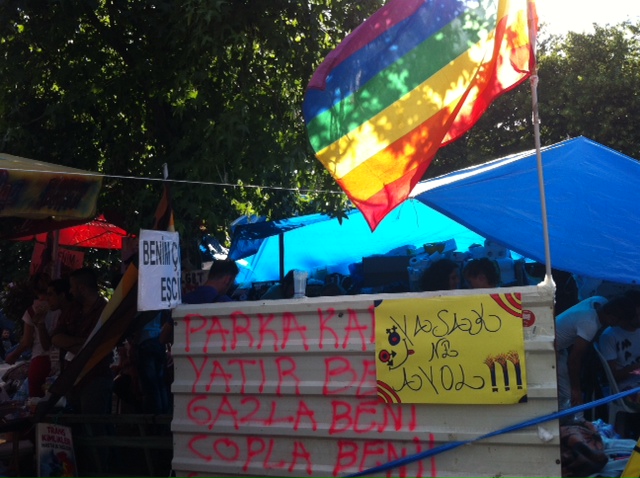 The LGBT tent itself; there are no people pictures because they didn’t want to risk being outed publicly.

This personal connection to the area, as well as the ideas that the park came to symbolize, is why queer people were so deeply engaged in the movement. Irem explained how they were literally on the front lines of the struggle, climbing the barricades and fighting police from the beginning.

Over the long term, it is perhaps their open and articulate commitment to the struggle that will do the most for gay rights in Istanbul. Apart from any concrete legislative or social gains that may stem from the protest, the centrality and steadfastness of the queer population greatly improved perceptions of queerness in the larger population. It’s hard to tell from afar, but Taksim Gezi is not a big place. By the very nature of the protest and its setting, people were forced to interact in new and different ways; for instance, the LGBT tent was set up right next to the AntiKapitalist Muslumanlar camp, a conservative Islamic anti-capitalist group. As police violence increased and survival became more and more difficult, fighting for a common cause forged bonds between queer people and other Turks that might never have existed otherwise. As Irem said, “Fighting side by side, people previously homophobic are now opening their minds.”

This open-minded sharing of ideas was a hallmark of the protest and probably its longest-lasting legacy. It galvanized people from all walks of life into political action, threw them all in a pot together and stirred. Fulya Dagli, a 20-year-old law student, stopped to talk while her friend, Zelal Pelin, stenciled a poem she’d written onto the cement with black spray paint. Fulya stressed that the past few weeks had been an incredible chance for people from opposite corners of Turkish society to talk and actually be heard by each other: she listed nationalists, Kurds, men, women, anarchists and socialists. It gave Turks who would otherwise never have interacted with queers the opportunity to do so, and realize that they’re actually people too – and that they have more in common than they originally thought . 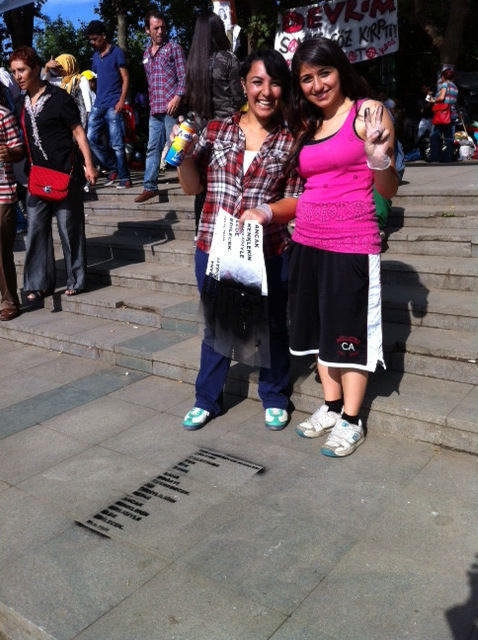 Fulya Dagli and Zelal Pelin, 20, law students at Istanbul University. They just finished spray painting the poem below, about solidarity between different groups of people, between “all the colors in the world.”

This mingling of peoples is something that can’t be erased, regardless of what happens to the park or its protestors themselves, and it has positive implications for queer rights and activism. Simply by being themselves – the multi-faceted people that they are – the LGBT contingent changed the minds of many of their fellow protestors, if not larger groups across the country as well. This is not a new concept. It’s old news that simply knowing a gay person tends to make people much more tolerant. But it’s important to remember, especially when the problems in the world seem too great and too heavy, when there are too many deserving causes and not enough time or energy in your life, when legislation seems hard to pass and hate crimes still run rampant across the world. A conversation, a friendship or a new work relationship can be a catalyst for more gay acceptance. It feels small, but just being you, queer and proud of it and living your life, is something big. And on the large scale – like in Taksim Park – it is huge. It is the way things get changed, one mind, one protest, one country at a time.