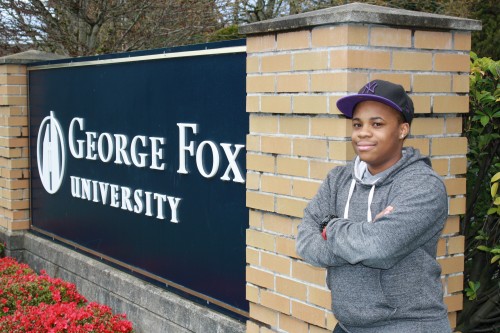 After the Newberg, Oregon university denied Jayce’s repeated appeals for housing, his attorney filed a Title IX Discrimination suit with the U.S. Department of Education, reports PQ Monthly. This week, the department granted the school a religious exemption to the Title IX requirement. Jayce and his attorney were not aware George Fox had applied for the exemption.

Jayce has been known as a man socially for several years, explains his mother Janice in a Change.org petition garnering support for his case. “I want Jayce to be safe and to feel included in the campus community as he continues his education at George Fox and I want Jayce to be allowed to live in on-campus housing with his male friends,” she writes, noting that his friends have no problem sharing the dorm with him.

Overall, Jayce says he has received support and built community at the school. It seems to be the administration that is putting up barriers to his full inclusion — including announcing a plan to change its policy to include a rule that all dorm placements will be based on a student’s so-called “biological sex at birth.”

“I have a supportive community at George Fox, including my friends, faculty members and the students who are part of the unofficial LGBT & Allies club on campus called Common Ground,” Jayce told PQ in April. “I’m also not the only trans student on campus. I love the people at George Fox University.”

As queer and trans people become more visible and gain more civil rights, religious institutions are digging in their heels against perceived threats to their sanctity, and religious exemptions such as this one and those granted in last week’s Hobby Lobby ruling are becoming more common. Jayce’s lawyer, Paul Southwick, said he has not received any information about the nature of the request or the exemption itself despite repeated requests.

“After I received their letter, a representative from ED told me he was ‘not authorized’ to discuss the religious exemption with me,” Southwick said. “Normally, the ED decides whether to investigate a complaint within 30 days. In Jayce’s case, they made us wait about 90 days, all without telling us the real reason they were making us wait. We are going to appeal the ED’s ruling.”

Without seeing the ruling, it’s not clear what the basis of the university’s request was. Theologians and Christians have varying viewpoints about what the Bible says about transgender people. However, the Gospel is explicit about the responsibility of Christians to care for the oppressed — in the Gospel of Matthew, it’s identified as a requirement to enter Heaven. Those who feed the hungry, care for the sick, visit the imprisoned and invite in the stranger — in short, those who extend grace to the “least of these” — are as good as doing those actions to Jesus himself. So goes the parable. In Quakerism specifically, commitment to community, pursuit of equality, and honesty are often considered key parts of spiritual practice. The testimony of integrity calls for Quakers to deal honestly with others in word and deed; the testimony of equality calls for recognizing the equal dignity of all people and rejecting “all forms of discrimination.”

And yet a Quaker university is firm in its refusal to provide housing for one of its own students, and refusing to be transparent about the process. This is especially disappointing because of Quakers’ general reputation for being affirming and badass (although George Fox University belongs to an Evangelical branch of Quakerism that adopts more conservative Evangelical Christian beliefs than many Quaker communities). Darleen Ortega, a Quaker, George Fox alum, and judge on the Oregon Court of Appeals, said the school has been opaque in its handling of the case.

I see nothing in scripture or Friends theology that justifies or even supports the university’s position. What I find in scripture, instead, are calls for compassion and kindness to everyone. And I don’t understand how one can deal ethically with someone in Jayce’s situation without working to understand his circumstances and come alongside him. There is no clearer call to Christians and no practice more fundamental to Friends.

With the new school year just a few weeks away, Jayce and his supporters will continue to fight for his right to campus housing. And religious institutions and even private companies will likely continue to file for exemptions to laws designed to protect people’s basic human and civil rights.