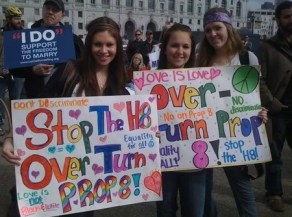 You can find the full complaint here. One of the most interesting elements of the trial are the controversial rulings of Judge Walker, who is allowing things like Yes-on 8’s TV advertisements, press releases and campaign workers’ statements as relevant evidence of what the voters intended. Furthermore the Prop 8 Sponsors are subject to investigation on their personal beliefs regarding marriage & sexuality & the trial will be on YouTube.

Live telecast: The trial is to be shown at the federal courthouse, 450 Golden Gate Ave., S.F., in the 19th-floor ceremonial courtroom, and at the Ninth U.S. Circuit Court of Appeals, Seventh and Mission, in the first-floor library conference room.

On video: It also is to be shown on a delayed basis on YouTube. youtube.com/usdccand UPDATE: “The Supreme Court temporarily halts streaming of Prop 8 trial on YouTube” (thanks, Nate!)

Already one man down on the other team

One of the five defendants in the Proposition 8 trial that begins in California on Monday wants out, according to the New York Times. Here’s a quote from Hak-Shing William Tam, who says he has to drop out ’cause his shit is gonna get vandalized if he does it: “One by one, other states would fall into Satan’s hands. Every child, when growing up, would fantasize marrying someone of the same sex. More children would become homosexual.” (@dallasvoice) 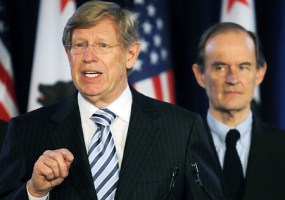 The last time David Boies and Theodore B. Olson battled in a courtroom, the presidency hung in the balance as they represented opposite sides arguing the fate of the 2000 election. So Mr. Boies, who worked for Al Gore in the 2000 case, says he has some perspective on their latest fight. It finds him and Mr. Olson, one of the Nation’s most prominent conservative litigators, working together in an attempt to overturn Proposition 8, the 2008 California ballot measure that outlawed same-sex marriage. (@nytimes)

Actually Theodore B. Olson himself wrote an excellent essay for Newsweek: Why Same-Sex Marriage is an American Value.

The simple fact is that there is no good reason why we should deny marriage to same-sex partners. On the other hand, there are many reasons why we should formally recognize these relationships and embrace the rights of gays and lesbians to marry and become full and equal members of our society. (@newsweek)

This is a rundown of the case, sort of:

First, is this trial, in fact, a strategic error? Second, what are the main issues involved? And third, what will the legal defenders of Proposition 8 have to offer in the way of arguments? (@huffpo)

This trial is an all-star, high stake affair:

The trial has a star witness list with the potential to ignite all kinds of important conversations about marriage and discrimination. And yet if this case ultimately comes out the wrong way, it could do serious damage to the gay rights cause. Perry v. Schwarzenegger is a thrill; it’s also terrifying. (@slate)

Stacking the Deck Against Proposition 8:

According to the plaintiffs, there is just no rational basis for government to privilege marriage between a man and a woman. Thus, in their minds, Proposition 8, which was supported by more than seven million California voters, could have been adopted only as a result of “animus,” as the complaint puts it, toward gays and lesbians. (@nytimes)

Equality California needs you to sign their petition urging Obama to file a brief stating that the constitution prohibits the majority from taking away the rights of any minority:

President Jimmy Carter, Governor Jerry Brown and former Governor Ronald Reagan spoke up and stood with us when we fought the Briggs initiative in 1978. Now, Governor Arnold Schwarzenegger and Attorney General Jerry Brown are speaking out and standing with us by telling the Court that Prop. 8 cannot be defended under the United States Constitution.