I’m serious. They weaved it in to the plot seamlessly. And when I say seamlessly, I mean the same way Gossip Girl and The O.C. managed to weave in fashion shows. By pretending it’s totally normal for towns to hold annual charity fashion shows. Has anyone ever actually been to a charity fashion show? That’s not rhetorical. I’m really asking you guys. Is this real? Either way, Alison’s mom comes to town/ maybe stills lives in town and has a really important question: 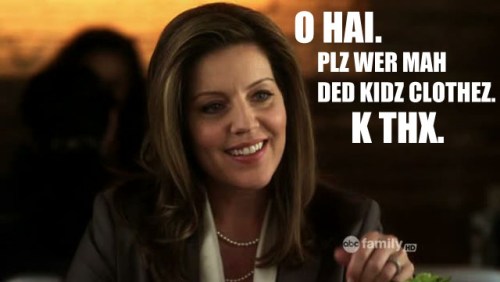 So understandably everyone’s really uncomfortable but feels guilty enough about the “our dead friends mom is like totally sad” factor to agree to wear Allison’s old dresses/costumes/comicon outfits in the fashion show. Their agreement means two really important things. Important thing number one, Allison obviously bought her dresses from someone who could magically see two years in to the future of fashion. Allison’s shopping fairy is A. Oscar de la Renta is A. The people from California Closets who overhauled Allison’s clothing organization are A. Important thing number two, I’m not going to talk about anything else in the episode because Riese wrote a recap and the fashion show seems most applicable to me. 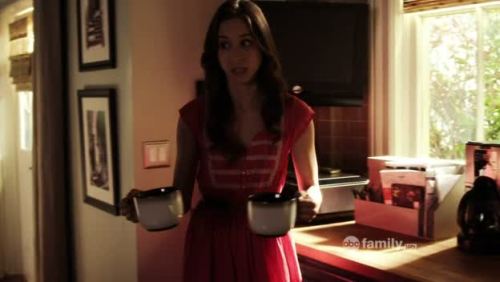 WAIT. YOU'RE NOT EVEN GOING TO TALK ABOUT MY CUTE DRESS FROM FREE PEOPLE YOU CAN BUY ONLINE FROM PIPERLIME FOR $49.99

So since I’m not talking about Spencer’s dress which you can buy by clicking this link, let’s just move right along to the fashion show. To make this go as smoothly as possible, for each pair of dresses shown, we’re going to play a game called “Gay or Not Gay” in which I invent the rules as I go along in order to make jokes. (Here, Gay = something that might be worn by someone who is gay/lesbian/trans/bi/queer/awesome/pansexual/unisexual/awesome/a Pokemon trainer). For your participation in the game, you try to guess why each outfit has been declared Gay and don’t get made at me ’cause it’s all in good fun. 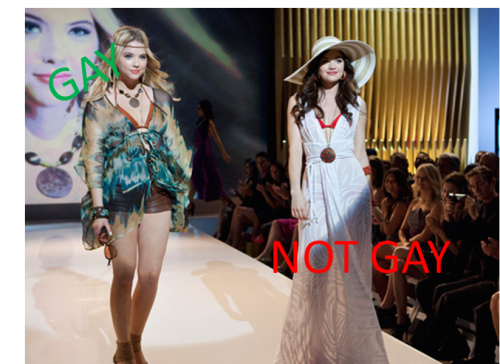 THIS ISN'T BEACHWEAR. I JUST SIT AT HOME AND WATCH HOARDERS IN THIS.

Hannah and Aria’s first walk leaves us asking, “Hey, where exactly were you planning on wearing that?” I’m going to assume the answer is an outdoor dance club on the beach. Actually, that sounds like a place I would definitely want to go. Looking at individual items, I’m crazy about Aria’s gigantic hat. I burn really easily so cognitive biofeedback have me convinced big hats are adorable. Both outfits leave me thinking, I totally prefer vintage style bikini tops to triangles. Overall though, Hannah wins it on this one because while her outfit asks “Hey, want to come to a Whitney impersonation contest with me?” Aria’s only reminds us that No One Really Wears Maxi Dresses. 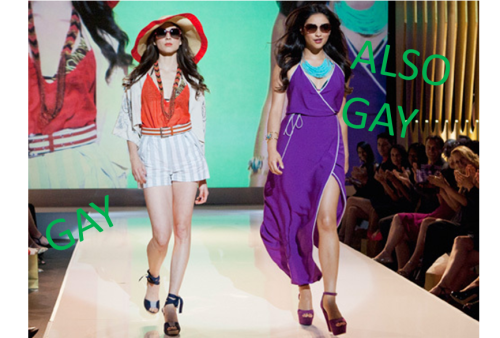 THE FUTURE IS SO BRIGHT

One of the rules of the game that I just made up is that since Emily is gay, anything she wears is automatically gay. This is because, as we know, when someone who is gay touches something/someone, they get the gay all over it. Spencer’s outfit is also gay because I really love orange. I’m not joking, I’m wearing an orange dress right now.

Let’s take a break from the game to go over some fashion/color theory. Some people will tell you wearing orange and purple together is in style and maybe even flattering. These people don’t care about you. Emily and Spencer are showing us here that if you’re going to put orange and purple together, just like sex, use a barrier. Notice that Emily’s necklace and the background are both Tiffany blue? That’s right, turquoise makes the best barrier between orange and purple. Also, just like sex, if you don’t use a barrier you might (depending on the sex) end up with a rugrat. 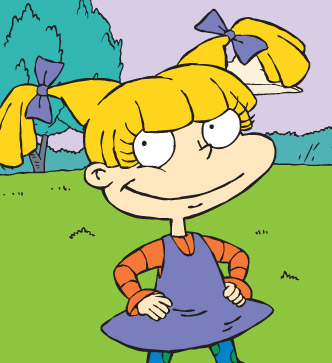 THIS IS PROBABLY NOT THE LOOK YOU ARE GOING FOR

Notice how Angelica’s tights are not turquoise but instead Brandeis Blue (which is the trademark color of my alma matter and actually has its own Wikipedia page). This is not a mistake I suggest you make.

Back to the game. Unfortunately, Emily’s dress falls in to the category of No One Really Wears Maxi Dresses as well as being a billion dollar Diane von Furstenberg dress. Spencer, though, is doing a lot of good things. She’s wearing a big hat. She’s wearing a belt with shorts. She’s not wearing a maxi dress. These are things I/we might actually want out of our summer-wear. 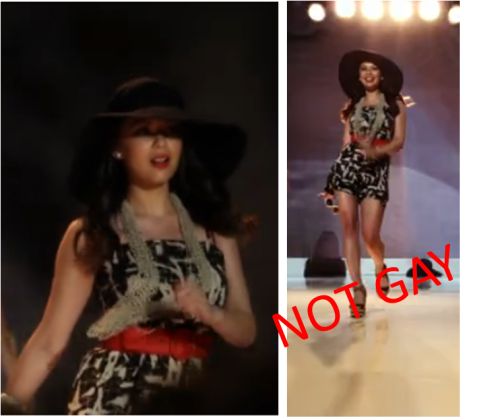 BEFORE SHE WAS CRUELLA DEVILLE, SHE JUST WENT BY ELLA

Mona has been bossy all episode but then her outfit just isn’t that cute! It almost is, I like her romper, but the combination of black and red and the black floppy hat just make her look like a young, rich window. Besides, she looks so sad in the close up! By the rules of Etymology, that just isn’t gay. 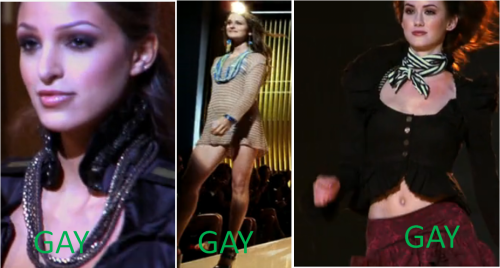 Round 4 is the extras round! Every outfit in this round is gay because every time we meet a new female character on this show she’s a love interest for Emily. Thus, all of these characters must be gay and therefore all of their outfits are gay. Especially that girl all the way to the right. She is actually rocking a scarf and vest. We’ve discussed this at length, but scarves are so gay.

Round 5:
Unlike the other outfits we’ve seen thus far, these four were designed by the show’s costume designer Mandi Line. Mandi is my girl for real and these costumes are bomb, but, after the Diane von Fursternburg dresses, they look like costumes. That okay because they have the intended effect, unless you stop to look at them continuously — then they’re ridiculous. So, round four is the Costume Round where I lose interest in rating things gay or not gay and instead just make jokes about them. 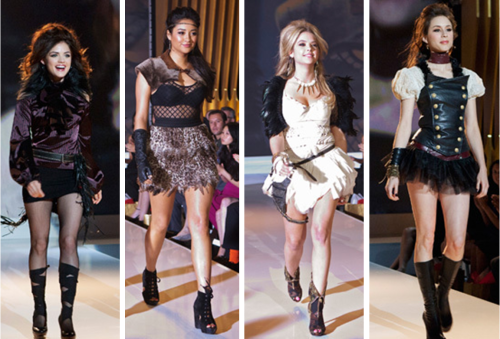 Seriously? I can’t even make only one joke here. Who exactly is this foursome? Are they going to a 70s TV costume party as extras from Land of the Lost? Is this part of Hanna-Barbera’s latest crossover movie, Flintstones Meet the Cast From True Blood? Have they reformed B*Witched? Is Aria a country music star going through an awkward goth phase? Is Spencer trying out for the stage adaptation of Black Swan? Is Emily speaking at an American Anthropological Association conference on the existence of homosexual cave women? Did Brittany S. Pierce tell Emily to wear those legwarmers on her arms? Why does Hannah wear white so often?! Who bought all that animal print fabric that they have to use up? Is is just me or is Aria dressed like Natasha Fatale? I’m pretty sure that Spencer’s shirt, Emily’s arm warmers and Hannah’s sleeves used to all be one jacket. Why is all of their hair so big? Are there razor blades just all up in there?

Guys, Hannah is wearing teeth around her neck. 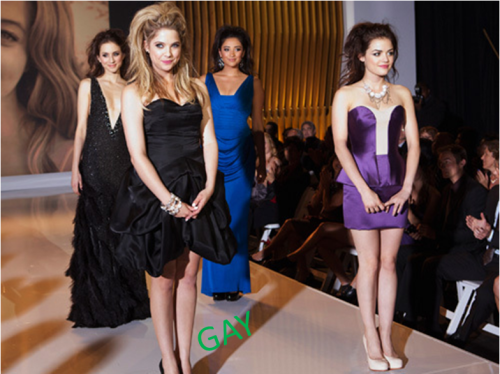 I’m breaking my rule from the previous rounds to say that Hannah’s Alexander Mcqueen dress is the absolute bomb and the only dress I’m prepared to declare gay. I would wear that dress every day from now until forever if it weren’t at least $2500. Unfortunately the other three leave something to be desired. I think they look like they’re playing dress up in their mother’s closets. Which I guess makes sense. Since these thousand dollar dresses are supposed to be dress-ups.

So I guess that’s a wrap… Wait 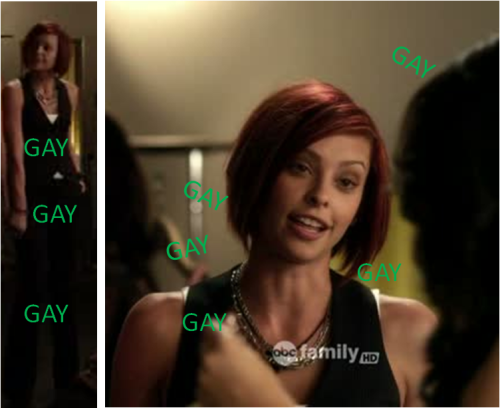 Do I even need to say anything? What was the costume request for this? “Just whatever the gay kids are wearing these days.” I mean: vest.

As always, thank you to Intern Grace for screencaps and being a generally great person!